has wide, undulating fairways carved through a sugar cane plantation and is set between

the volcanic mountains and the turquoise blue sea. Much of the landscaping and design,

such as the use of Vettiver and Mondo grass, simulate the dramatic contours of the estate

fields which still surround the course.

for recreational golfers, with five sets of tees and bunkers, water hazards and blind greens

strategically placed. Two rivers, the Citronniers and St Martin, cross the fairways at 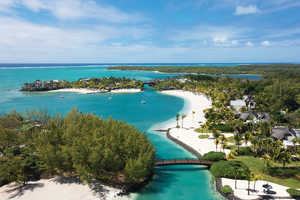 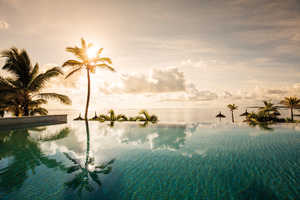 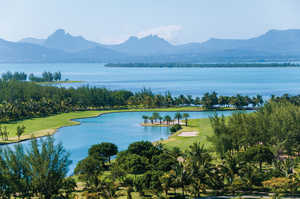 Certainly a good place but without highlights.
At some holes many Kahlstellen around the green.
Grüns (middle - end of October) constantly lightly sanded.
Not exactly what you want on vacation.
As a guest in Awali you play for about 25 € green fee. But the cart beats again with 25 € per person to book.
So then the round costs 50 € per person.
Caddy Master Team very friendly. Reception two unfriendly ladies. No holiday like welcome.
Since we finally wanted to play on greens we went to the Avalon Golf Club. Very good place. It's worth it.
On the occasion, respect the Heritage Awali is not suitable for couples.
A true toddler paradise.

Attention danger to life for vacationers

We visited the Heritage Le Telfair for the fourth time from 12 to 19 September 2019.
As always, the hotel, all staff and all the restaurants fully convinced us in quality and friendliness. Hotel review is done separately.

We play golf every day, which is now on 14.09. happened on the course has quite negative rarity value.
We start on schedule at the agreed start time, behind us is a single player eigetragen.
However, there is already a 2 er Flight at the tee, obviously without a regular start time.

At hole 1 (par 4) Mr Christophe Kamdiane (local hotel manager) of the neighbor hotel Awali played the tee about 10 meters behind us, we are 60 meters before the green, so a long drive.
Unfortunately, the situation escalates already at hole 2, because we had to wait (foursome flight in front of us), we remained in sight, because we already had the dubious pleasure at hole 1.
When I made my 2nd shot and went forward, his ball flew just above my head and rolls 30 meters ahead of me. A fore sadly missed. With so long drives Mr. Christophe Kamdiane can not play as long as we are still in sight, that is intentional danger, especially since he should be aware of the length of his drives.
His intentional arrogance and his complete lack of understanding of the dangerous situation are expressed through his behavior. Of regret or honest regret no trace.
He was bored and conspicuous, almost provocative, disinterested!
My wife was provoked by it, feeling helpless, alone and abandoned. Also, the fact that you have been told how to speak with the manager of the Awali Hotel suggests that he has a special status, in any case his behavior will be tolerated and paying hotel guests will have to submit.
His statement was, we should be glad, nothing would have happened. No attempt on his part to smooth the waves, on the contrary we were treated like an annoying insect, our assessment and our view of things was never taken seriously.
We did not feel well and no longer welcome.
To play a tee with the driver more than 30 meters above us is a clear impudence and an attack on life and limb.
A train before, the situation was such that his tee still rolled out about 10 meters behind us, but over the head, can be excused with no banal talk.
We have been playing golf on various courses in the world for 20 years and are good players, which includes a handicap, so no bloody beginners who have no idea of rules or etiquette.
We felt it was clearly a malicious and intentional act, as we probably should have played closer to our previous flight for his feeling.
Mr Christophe Kamdiane now contacted the golf club employees, who were supposed to facilitate a quick match for him, proving his impatience and displeasure.
Aldo should settle this matter, unfortunately he has completely failed, he informed only the four-flight in front of us, that is played through.
We were only in the way, it was only about the concerns of the Awali hotel manager.
Our request was clearly defined to ensure that Mr. Christophe Kamdiane should no longer be left behind, as we were justifiably afraid for our health.
No apology, no regrets, no sympathy or interest recognizable by the employee, not even a comment in that direction, the motto was to ignore the whole thing, then we'll let it be good someday. As a result, we also felt in this conversation also not noticed.

Because at hole 9, he was back behind us and played the green even though we had not left the train completely, this one does not do if you have already committed a more than gross misconduct and the apology would have meant honestly.
Here we asked Vijay whether he is now settling the situation, but he did not dare and so there was now the second confrontation on this holiday.
It was expected of us that we let play through him and continue to play behind him, what we perceived as complete impudence, so outrageous we have not been treated on any golf course, as paying hotel guests!
We felt that we were second class, subordinate to others, this was confirmed by the assumption as described above, it was only about the interests of Mr. Christophe Kamdiane implement, we were just annoying and unimportant accessories, here was the well-being of the hotel guest far back.
Even after more than 4 weeks have elapsed, we have no positive feeling in retrospect, mainly and mainly based on how disrespectful, unimportant and ignorant we were treated by all those involved.
We apologize for traveling halfway around the world and paying a lot of money, disrupting Mr. Christophe Kamdiane and hindering his personal play.
A tip, but in the future block the golf course for him, then the annoying tourists are no longer there.

The real quality and helpfulness of the employees ultimately only manifests itself in a situation that is not simple or unusual.
If all goes well and only phrases are exchanged, how: How your your game, see you tomorrow, good weather today... Can not do much wrong.
We have now learned that the well-being of the Awali hotel manager is more important and for us hotel guests only the phrases remain.
Our very special thanks go to France Reine from the Hotel Heritage Le Telfair, who took great care of us and did not ignore it.
It made us feel, at least you, not unimportant!
Even at a meeting the next day, when Mr. Christophe Kamdiane had to apologize, at the request of the hotel management of the hotel Heritage Le Telfair, he has only clearly underlined the impression described here.
Mr. Christophe Kamdiane has confirmed to us that negative reviews are of no concern to him, so to all golfers, as the world is open to all, look at the other places on the island, they are all beautiful and an experience to play and it is usually easier to get a good start time.
And no hotel manager actually no time to play golf and therefore the tourists from the square want to push.

A truly great course that we played very often in our 2 weeks at Awali (the green fee is included in the all-inclusive offer). Fair for higher HCPs, demanding (especially gold) for the better players. 5 different tees on each lane let every golfer choose which golf he wants to play. Here is (almost) everything, from the caddymaster, who opens the shuttle door of the bus and brings the bag to the cart or trolley, from the check-in at the front desk, where you will be greeted warmly, when handing over the cart or trolley (with water supply) until the nice welcome after the round with wet and cool refreshing cloth.
The course itself is beautiful, very varied, each course offers other options, water, a few ditches, wide fairways, relatively hard bunkers, and is always quite fair, because the fairways are wide enough for some failures (but not all). .. You can walk the course well, although at the temperatures is quite sporty (most drive Cart), water is from the Caddy Master (in the cart also cooled) and after the first 9 holes at a stopover always a juice, apple or Ice!
The driving range is right next to tee 10 (from where in the high season usually starts), balls there partly ProV1, but also hard marbles here (normal range balls just).
We have played golf here almost every day, at least practiced or defeated (also very nice and without start time to play) 9-hole Par3 course (between 130 and 50m long lanes).
The weather was great except for a monsoon rain day, but the chance of rain is almost daily (warm but wet, of course), the place was very well booked (which was often associated with waiting through slower Vorflights).
Everything perfect so? Well, a few points would be left, and so here are my suggestions:

.) There are often no-shows in the bookings, which means that in the short term often only times can reserve, to which one likes to sleep on vacation. What if you ask for at least a small NoShow sponsorship, so people cancel their booked start time on time if they do not play? The reception also takes care of the respective hotel!

.) for the "runners" among us there is little to no seating on the round. Especially if you have to wait for a tee in the sun, that would be nice. One or the other park bench (with parasol?) Might encourage even more people to walk around the square.

.) the fees for the trolleys (by the way 3 wheel trolleys, on which the bag holds only partially good, take an elastic, so does not hurt) I find 500 Rupies (= about 13, - €) very high compared to. the cart. You could offer that a little cheaper and you might even get more people to run (makes for "fitter" customers who come back many years!)

.) there are no lightning shelters or sheltered in rain and thunderstorms... getting wet here is not as bad as in Europe, but lightning is lightning...

But overall this is a real paradise. And this place is just great! Anyway, we already know that we will come back!

All Packages in Mauritius