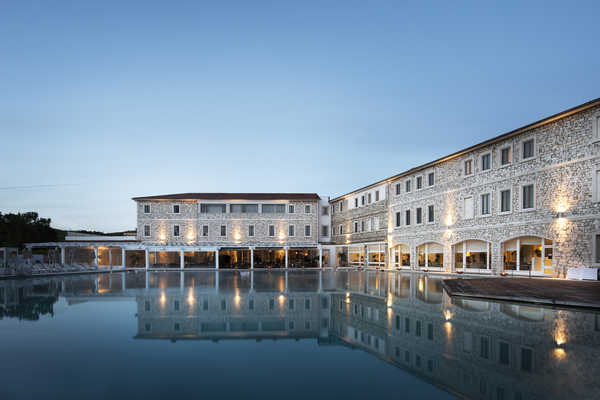 The Argentario Golf Club features 18 panoramic holes for a total of 6,218 metres and par 71. The course has been awarded the “Agri Cert” certification for its bio eco-compatibility, and all products used for its maintenance are completely natural.

In 2019, Argentario Golf Club became the PGA National Golf Course Italy, and is the only PGA licensed golf facility in Italy.

The golf course is located in a protected natural area, only 5 minutes from the Duna Feniglia Nature Reserve and 25 km from the Parco dell’Uccellina Reserve. The Orbetello Lagoon, the sea and the hillside offer a beautiful panorama and create a microclimate that allows golf to be played at any time of the year.

The Argentario Golf Academy, awarded with the title of “PGA National Academy Italy”, features the TrackMan IIIe simulator, a last-generation platform for analyzing your swing, whether you are a pro or an amateur.

The 18-hole golf course and the driving range, which were inaugurated in 2006, have been designed by the architect David Mezzacane and the professional golfer Baldovino Dassù. The holes were subsequently shaped by Brian Jorgensen: the result is a varied, spectacular and technically challenging course.

Among the 18 panoramic holes with mostly small greens, two dominate the sea and the lagoon, one is immersed in the Mediterranean vegetation, and another features water hazard running along one side of the green. A refreshing breeze mitigates the temperature and adds an extra challenge to the game which, on this course, requires a combination of accuracy and power.

Revitalizing drinks and healthy dishes that are both simple yet creative, await you in the Club House, which recalls the tradition of historic Anglo-Saxon golf clubs with contemporary details. The restaurant and bar of the Club House overlook the large terrace where you can admire the beautiful landscape: the golf course, the Mediterranean vegetation, Orbetello Lagoon and the Gulf of Talamone. 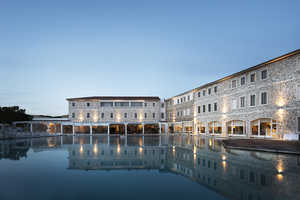 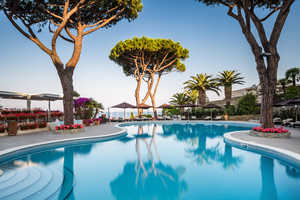 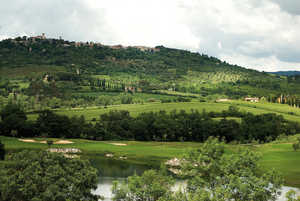 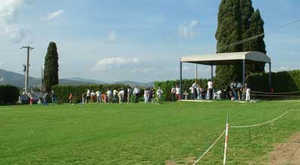 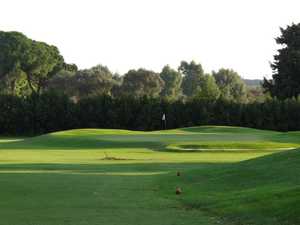 It has passed a year but the shoe pushes and now wants to describe my impression in the second week of September and thus give my rating it bothered me that I have not submitted a rating at the time I was notified in the reservation possibly 1 hole for filming could be recorded. Ok, with this situation and being informed, I could live well.
Now on arrival came the information that we play only on the first 9, but at best could play these two times. Ok, we were already there and did not want to spoil the fun. After paying the GF, we asked for drinks and driving range and there it got thicker, bar closed for work, drinks you can buy in the hotel. In the hotel, just after the entrance, a wall for the film set was installed, the hotel staff friendly but overwhelmed with my request for water! Finally we were able to buy water.
The DR could also not be used because of some movie backdrops.
So we went straight to the tee, but hello where is he? Except the white nothing is marked! Fairway was not a nice sight.
Hole two could have been concrete, could be a nice hole, but through another film set the tee was provisionally shortened to just under 80m.
All other tees and fairways, if you really can call them that, were simply an impertinence!
After the 9 we wanted to go back to the 1, but we were directed to the 10, but at the same time we were told that we can not play the 16 and 17, always because of the shooting. OK then go.
10:11 tee and then someone came running and told us that we should wait and stay calm. After 10 minutes we stopped the exercise ball and decided to play the first nine again.
Suburb I have made known to my displeasure that the 10% reduction for minus a hole would be ok, but the place is in a miserable condition. Only reaction, this is a decision of the management. At this point, greeting to the management. My generous rating, a star for the view, a star for the Green's.
Campo e management pietoso!

Not worth the trip

The golf architecture is outstanding. I liked hole 9 in this regard. There is the first star. The place is sophisticated and almost always requires an exact placing of the ball if you want to achieve a good score.
The second star got the greens, even if they were full of holes. This is partly due to the well-known evil that the players search the pitch marks only within a radius of one meter to their ball. On the other hand, the crows chop holes where they know Engerlinge (but does not speak for the maintenance of the Greens).
The greens are properly mown, fairly fast, spurtreu and partly tricky.

To the ground: The ground is that of a left-course. Another evaluator has identified a wrong grass variety. That could be quite. In addition, at least 1/3 of each fairway is sandy soil. This looks a) catastrophic and is b) a miserable position, with the bat under the ball to come. As a whole: very borderline.
Concrete was probably added to the bunkersand: Steinhart, not just for days, just unacceptable. Sand at most 3-4 cm, and that in each bunker. The sand was most likely washed into the ground by the rain.
In addition, parts of the square were covered with film scenes, which also did not seem inviting. A wall across the fairway, cactuses, sand, and chairs, but it is still a habit, even if it was only temporary.
At the entrance are the great facilities, the clubhouse included: bar / restaurant, lockerrooms, Proshop, etc. All empty promises: This is now everything in the hotel. The players are shown on a terrace exposed to the wind. The prices are accordingly (Pils 6 euro). Then they went in a 5 star hotel (!!) the beer brand! The next cost then 7 euros. Really to scream!
In the end something positive, there is the third star: the manager and the secretariat have brought with kindness, hospitality and cordiality a conciliatory conclusion of the golf day.
Conclusion: The views on the sea are fantastic. For this but 80 euro greenfee leafing out, is not necessary, which you get as well known for free. 80 euros but for the place: Drowned money.

The golf course is beautiful with occasional sea view. We played from looking and I must say if you play from yellow you missed some great prospects. A kart is recommended as space is already very hilly but it is also no problem on foot. For March, a perfect condition with fast greens.