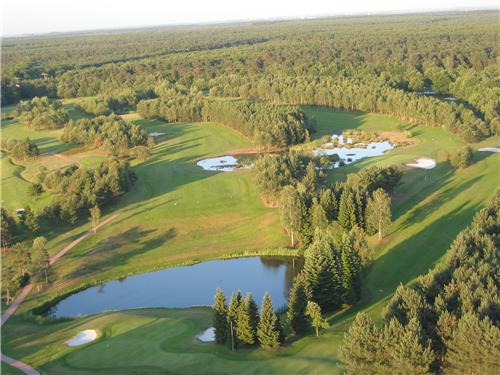 Visitors are welcome every day.
Membership of a golf club is required. 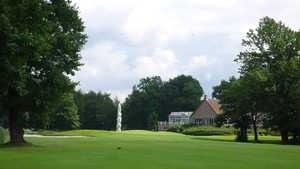 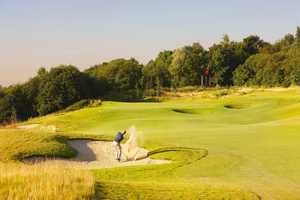 Good place in Belgium despite the nearby motorway

Played on 7/20/2021. The slightly hilly 18-hole course (cart not required for those with normal sporting ambitions) with an attached 9-hole short course is located a little west of the city of Genk in Belgium and approx. 40 km from the German border. Since the place is very close to nature but right next to the A2 / E314 motorway and the N744, you can clearly hear the corresponding traffic, especially on the back nine on some extinguishers. The front nine in particular have a strong parkland character with ingrown trees. The start on the first three lanes is a feast for the eyes and very calm. Later there are also some open lanes, then with one or the other water hazard. Especially on 18 you shouldn't forget the big pond in front of the green. Since this is in a depression, you do not necessarily see it on its second or third strike and easily falls into the trap. Two to three PAR3 lanes are nicely laid out with tees over water. Basically, most of the lifts are laid out in an interesting way, but without the big highlights, but it still doesn't get boring anywhere. The state of care was acceptable. One or the other fairway had a little foreign growth and it could have been mowed a little shorter. The greens were sanded, but still good and loyal. The bunkers were unfortunately not prepared after the rain and the sand in them was hard, which didn't make the game any easier. Most of the bunkers basically had beautiful, light, fine sand, but there were also a few bunkers with darker, coarse-grained sand. There is a driving range, unfortunately only with mat tees. You can draw balls for € 1 from the machine. The clubhouse with restaurant is large and modern. A hotel is connected directly on site. The pro shop is located in the basement of the building. You pay the green fee behind the counter in the restaurant at a window. The employee was friendly. The standard green fee of € 65/75 is generally appropriate if everything is OK. However, I received no information about sanded greens and unprocessed bunkers and no corresponding discount, which would certainly have been appropriate. The game operation on a Tuesday morning was manageable. As a single player, I ran into a three-man flight on hole 4, which let me through at the next hole. After that, no one was to be seen in front of or behind me until I was 18. I had requested a start time by e-mail two days before my game and immediately received an answer with the start time I wanted. I can generally recommend a round at the Spiegelven Golf Club with minimal compromises.

Very nice place which, if he were in Germany, would certainly rank in the top 20. Gorgeous parkland course between pines. Friendly welcome. Good condition.
The allusion to the 18th green will probably stay in the memory forever. Definitely recommendable is a visit to the restaurant "Kristaljin", the hotel Stiemer Heide, which is located directly on the square, offers arrangements that will spare your budget.

A really cool forest place as it is in Belgium more often!
The place is surrounded by pine trees! The condition was good and the greens fast! Nice people in the service, can recommend Spiegelven only!

Been to Spiegelven Golf Club Genk? Share your experiences!