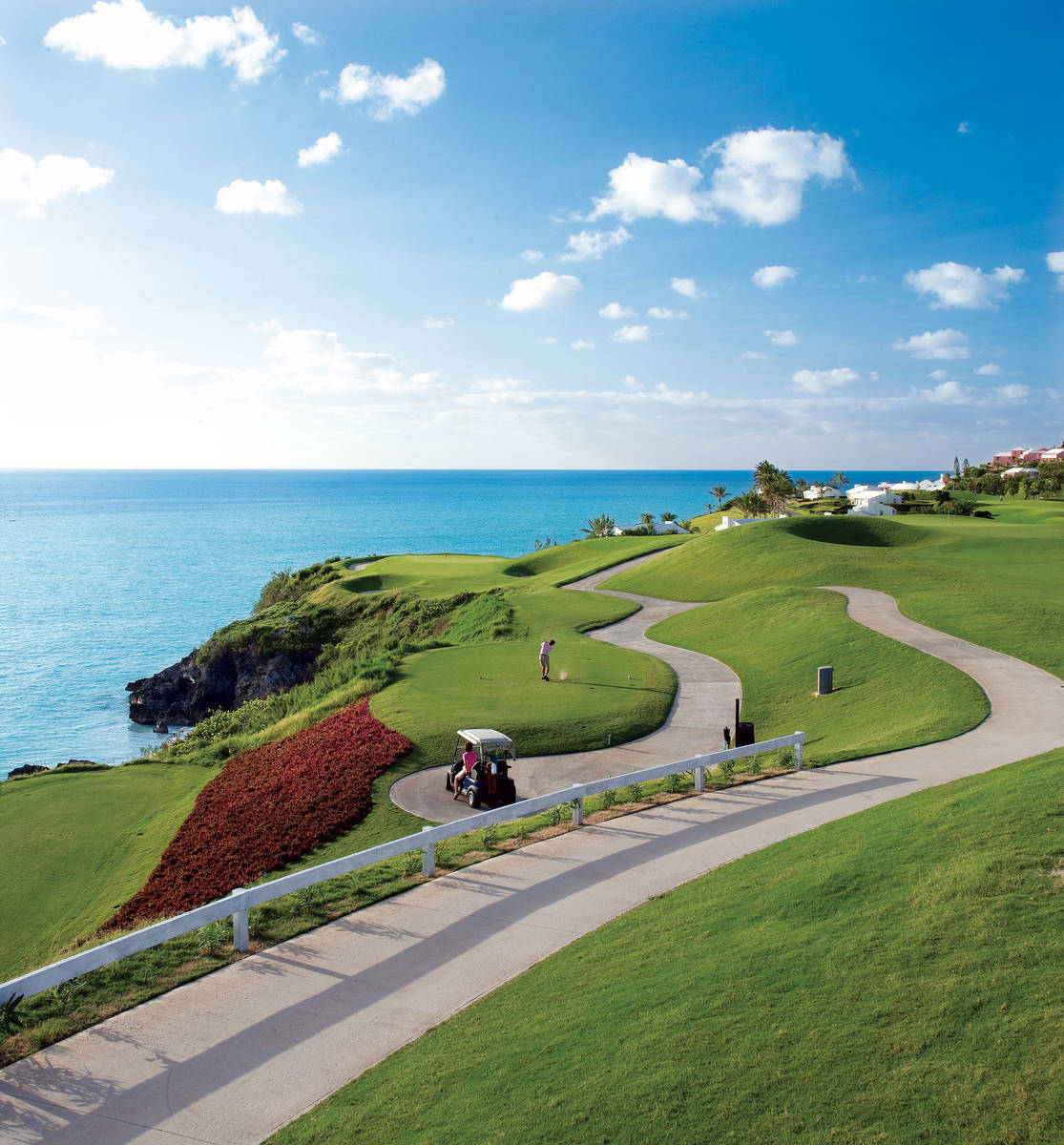 The oldest British crown colony is situated in the middle of the crystal-clear, azure Atlantic Ocean, about 1.500 kilometres north of the Caribbean. The 150 little islands, seven of which are linked with bridges, tempt with a comfortably mild sea climate all year through and a lush greening and blossoming nature. They are framed by attractive little bays and beaches with the world-known pink-shimmering coral sand. On the about 34 kilometres long main island you find the typical pastell-coloured little houses with whitetinted roofs, framed by tropical flora of wild oleander, hibiscus and bougainvillea. And in the capitol city Hamilton one single duty-free shop is alined with former Victorian magnificent buildings. Whether you discover Bermuda with the bus, the ferry or a moped, you will soon realise how relaxing living here can be, how high the living standard of the natives is and how warmly the guests are greeted everywhere.

On the southern coast the most popular and also the most spectacular beaches, Warwick Long Bay, Chaplin Bay, Horseshoe Bay and Jobsons Cave aline like a pearl necklace and tempt particularly couples who want to marry and photographers

Bermuda is no travelling destination for the masses with dumping prices, instead you find many luxuri-ous resorts like the Fairmont Southhampton with its own golf course, highly decorated gourmet kitchen and spa, the romantic Cambridge Beaches in cottage-style, the Elbow Beaches situated in a botanic garden, the Pink Beach Club with a, who would be surprised, pink beach or the less expensive Grotto Bay Beach Resort in a garden with stalactite caves and tennis courts. But besides that there are also holiday appartments and family businesses with houses for the smaller purse.

On the other hand, the magnificent nature is for free, the proverbial safety, best service, cleanness and a warm hospitality.

With eight golf courses on only 54 square kilometres Bermuda can present the densest net of golf courses in the world that is playable the whole year through. Let’s begin with the oldest course of the island, the almost 90 years old Riddels Bay Golf & Country Club, 18 holes, par 70, which leads around a bay with view on the azure sea and Fairmont Hotel and which is today the favourite course of the actor-couple Douglas-Jones. But there’s certainly no course that surmounts the Mid Ocean Club in its importance, 18 holes, par 71, where even Winston Churchill, despite his credo „sport is murder“, has already indulged in the white sport. The Cocktail Bar in the cottage-style hotel of the same name was also na-med after him. This autumn the who is who of the golfing scene will meet here again for the highly-endowed PGA Grand Slam Tournament and that only increases the exclusivity of this course. The third private golf club here is the Fairmont Southhampton Golf Club, 18 holes-par 3 Course with adjoining top-class hotel. The course in the hilly terrain with lakes and lush vegetation is as short as it is tricky. The Port Royal Golf Course is considered the most popular course of the island, the 18 holes of which offer a breathtaking view on the sea, amongst them a par 3 with island green on a cliff. The fun-course of the island is unquestionably the 9-holes Ocean View Course with many ellevated tees that guarantee the view on the sea.

After that you should prepare to enjoy yourself because

good food bis part of the life in Bermuda just as much as the sun and the turquoise sea. You can choo-se from more than 150 restaurants as well as cafés and bars, bistros and delicatessen and they offer everything that the heart desires from local specialities like the Bermuda-lobster, which can be found on the menues from September to the middle of April, over delicious fish and mussel dishes to the desserts that are typical for the island.

And when will you make your journey- to paradise?

There are currently no packages available in Bermudas.