My favorit Course in this area.

Nov+Dec 2015. If you love golf, and if you want to play The Game with a smile on your lips. Play Lorca. The wiews. The seviceminded people on this course is fantastic. This is a real experience. Johnny S

I love this course!

I have played lot of games and everyday the course is in better conditions. The greens aré excellent, fairways are very soft and in very good conditions. I always play in Buggy and you can use it in all the áreas, of course, no in tees, collars and greens...

Lorca is a very fantastic course, the area is special. SUPERGREENS. The layout is magnific. This is a course that all golfers must play. I played it several times Before. It has a superkondition now. The date i played it was10 oct. 2014. Johnny fr Sweden. (dont forget to taste the good Spanish food in the restaurant)

Played Lorca Golf 26 of febr. A tuff course. With ravins and a special fairway. Sometimes a Little bit like Las Ramblas. Take a buggy. The greens was good. The course is new. They have a Little bit work to do on the course. Johnny S.

We were very impresed about the golf and the apartments. The landscape is wonderfull and the course is suitable for all the handicaps. Every hole is different and the greens are now in perfect conditions. We hade a really good golf holidays at Lorca Golf Resort.

The course is in a beautiful location in the mountains of Lorca, the situation of the course is a bit precarious, fairways on the verge of playable, obviously the crisis is felt, the resort is in a state of abandonment, due to lack of personnel, you can leave until at 11.00 then it closes at 15.00, the greens are not bad, the course includes almost all tee shots on the creek or water to fly.
The green fee proportionate to the conditions.

A golf course with many gorges. You should take balls if you are too short (tee should be 140 meters) or not play. Wassser always comes back into the game, which does not necessarily make things easier, but more appealing.
The greens are awesome and the ball stays with a carry hit too. The bunkers could handle a bit more sand. The driving range is not necessarily inviting. The putting green, right next to the tee 1 well. Chipped or approach shots can not be practiced. Although there is enough space, this is missing.
The staff is super friendly and the view from the clubhouse idyllic.
Menu for the small appetite sufficient, but not more.
Drinks are always served with something to snack.
Conclusion: Who is in the area, should play this course and form his own opinion. Personally, I find this place challenging and therefore not boring.

The magnificent location in the midst of the mountain range with constantly new views compensates for a mid-March not optimal place (very dry and hard, fairways with many sandy areas pervaded).
For lovers of attacks over water or small gorges certainly quite outstanding. But it does not necessarily take 11 tees of yellow to require a length of at least 140 m or more. Due to the dryness many balls rolled uncontrollably into the side bushes. So you lose a lot of balls, which you can find again with some searches. Partly the tracks are a bit close together, so always look what happens next door.
Secretariat and gastronomy were very friendly, the sanitary facilities in a very well-kept condition (towel fee for showers 2 €). The food offer is limited.
Conclusion: worth playing alone because of the location, otherwise borderline

A sensational golf course. Super maintained and on the greens you go like a high pile carpet. The staff are very friendly and helpful. The locker rooms a bit sparse, but sufficient.
A must come in this area.

The region is in recession, the Lorca Golf Resort is nonexistent. There is an inanimate urbanization with roads to nowhere and four finished homes. That's it. It is an 18 hole golf course with club house, the people there nice but that's it already. Would have you had more space, can make something great here Would have the designer. Granted, some Tshots over deep gorges not unspectacular. But if you are 160 m carry demands, one must also plan accordingly place to view in Aguilon Golf, for example, so here is a much too narrow planned place of it, which is lebensgefaehrlich approaching in some shape holes when the yellow tee box directly under the flight path the opposite is lying discount, the hole 14 is even of the hooks 13 and the slices of the 17 under fire, or like the 6 is made to the shape holes 5 and 6, where the Gruen attack directly over the tee, and indeed blind! . Course maintenance is limited to fairly decent Gruen, the fairways and the rest are apparently entertained only due to lack of drainage, resulting in dead palm trees and brown Maccia as acts ranging from bone dry fairways. Bunker received as initial super quartz sand, here you can see what will happen if you do nothing further: rock hard Areas with sparse grass growth, from which one can only chipping.

Great course at a top price!

A beautiful, with a lot of effort into the existing landscape steppige integrated varied course, which caused a lot of pleasure and especially represents a real challenge from the back tees. Limited use because often valleys and cliffs are to be overcome before the fairways and the greens are accessible for beginners (definitely enough balls to take). The state space can be in some places (partially dry Vorgreens, no ball washers, and some bunkers some grass growth) shows that the region is currently in a recession. Nevertheless, the staff is very nice and accommodating and the cost of green fees, up to date during the summer months at 30 € including buggy, are a real bargain for a golf course in this category. 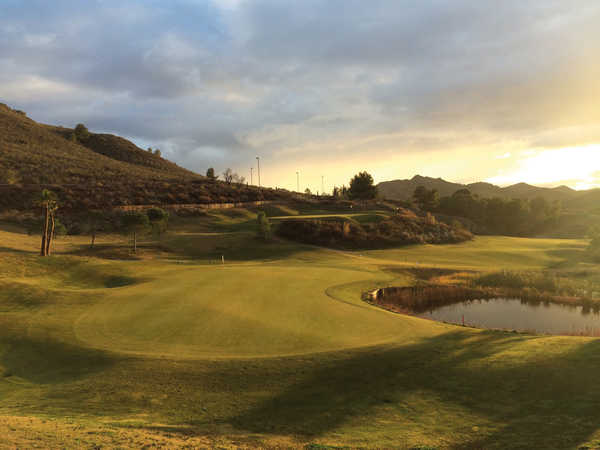