I played here on 10.8.2018. The reception at the reception was friendly. The place was in a very good condition and well maintained. The very undulating fairways make the place even more interesting.

The food in the clubhouse was also good. Will be happy to play here again.

Premium space! After the friendly reception it was already on the lap. The place is very varied. The greens were good and exciting. Gastronomy outstanding, friendly and reasonably priced. I will definitely play the place again.

Strategic game is in demand

The course is very demanding overall, especially from the back draws. If you can not keep the ball straight, you will not have a game. The individual orbits are not particularly wide, trees are frequently "in the way". The first 9 holes are lined with many white posts on the left side of the track. The second 9 holes are dominated by red poles, with side and / or front water coming into play. In addition, there are many bunkers - placed in the right places - which are still surrounded by high scrub. Strategic game is in demand! My opinion: the better the gameplay, the more fun on this course. You have to think exactly where you want to place the ball.
The condition was good overall in July 2017. The fairways were fantastic as were the bunkers. The greens I found, as measured by the rest of the condition, not so good (blunt and soft).
The driving range makes the hearts of sporty golfers beat faster, especially the pitch and chipping area.
The terrace and the club house invite you to linger after the round.
Especially for lower HCPs I can absolutely recommend the place, a great sporting challenge.

High expectations were not met

Due to the many positive reviews I came with high expectations after Olching. Unfortunately, my high expectations were a little disappointed. Already the state of the driving range was fear the worst. That would be paid if the place would have been in fair condition. Unfortunately, this was not so, and the court was not in good maintenance condition. The haircuts were just so, the fairways were covered with dirt chunks, many areas had neglected, only the greens were okay. The usually fairly straight paths are often very close together, the first nine run once outside around the flat terrain around, which is why virtually always left is a bounds. On the positive side, the green complexes with beautiful sculpted bunkers and undulating greens. There are also many interesting water hazards (which also come into play) and beautiful old trees. The design is consistent and quite attractive. Many holes are a sporting challenge, the rating is high. Overall, however, I was a bit disappointed, from a top-ranked Olching is still a distance away. Biggest gripe is the course maintenance.

The most beautiful place in the area of ​​Munich

Simply Gorgeous. A very well-maintained complex with beautiful clubhouse.
The highlight is still to the terrace.
The place is in a perfect state. Suitable for all playing levels and I must say that the place is a challenge.
Many bunkers, lots of water hazards.
It's really fun!
Start times are to get over and the entire organization and club management is at a very high level. There are also very interesting tournaments.

In short: Just perfect. From me a very clear recommendation. Top place.

This place must have played. After the conversion, a real gem!
The condition - best, greens - top, athletic really demanding. I have played from the blue tees, and some really tricky. Finally a place where you need brains.
The crowning glory, the beautiful landscaped terrace overlooking the 18th green.
If you're traveling so in the Munich area, make sure tions detour to Olching.

The best place to Bavaria-among the top courses in Germany

I recently played 18 holes and was totally thrilled. No comparison to a few years ago, when I played the first time there. After re-opening last year a lot has changed. The complete greens and tees renewed and some new bunkers have found their place. The overall layout is very compelling and easy-coherent unlike at many 27 hole courses in the Munich area, where you sometimes occurs like having two different places games.
On the terrace I have fortunately a very nice member of the men's team made that mine has reliably informed that the place is just extremely demanding for the better handicaps of white. Even for players of my handicap (15) of the course is challenging but not overwhelming - a winning combination!

I come around a lot professionally in Germany and as an avid golfer, I play one or the other place. And I have to say that I have not played long on such a prominent place.

Even off the court convinced the golf club fully throughout:
The training facilities are excellent and I have learned in talking with the teams that often Tour Pros (even Max jaw had allegedly been there) come to train. The Kurzpielgelände was completely renewed in the context of conversion work.
From the terrace modernized in the meantime you can enjoy a wonderful view over the square after the round.

In short. Simply a wonderful golf experience and can only be recommended!

Top place with the most beautiful terrace in the vicinity

The reconstruction of the place and especially the greens have paid off.
The course is in top condition, plays sporty sophisticated, the undulating greens bring a phased to despair, but leave in relation to golfing claim nothing to be desired.

In short, a "Must Play" around Munich.

The beautiful terrace and the lounge area overlooking the 18er green, good food, friendly, competent staff both in the sports office as well as in restaurants complete the positive picture.

It is true the greens were in poor condition 1 year ago but with great effort they were completely redesigned and are now in a professional status as one seldom sees greens. The whole place is in excellent condition, beautifully landscaped involved with challenging tracks. Even on little things like cleaning facilities the club directly to the deductions to the driving range was thought. You should have played there.

I have played there in the summer and can denPlatzzustand rate only deficient.
The greens were rotted away and partially on my inquires as I was making still really stupid by the competent Headgreenkeeperin.
Very very sad for a really so beautiful place. Here is apparently working with staff that the requirements can not cope! 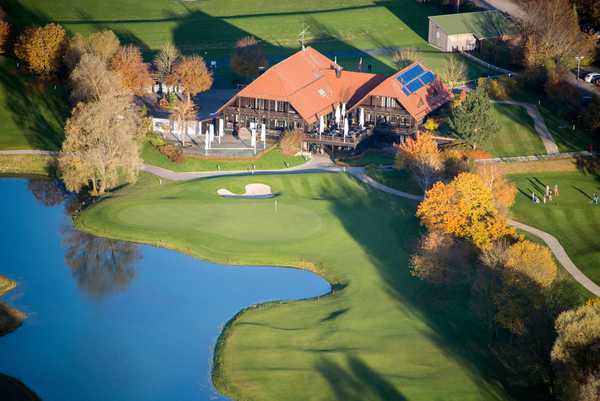