Nice and well maintained for a 100+ years course

Played on Sunday morning with 2 other friends.

Friendly course, not too challenging with just sand hazard to trap you along the way. But if shot went too out of fairway, into woods, can forget about finding you balls. No water hazard.

Who is prone to the many airplanes that fly over the square should alternatively rather play in Neuhof (Neuhof - relatively close-is for me definitely a touch better than Frankfurt).
Frankfurt has a great square care, spurtreue greens, which partly show considerable models.
It was a lot of fun to play the pot bunkers as they can be a real challenge... and there are plenty of bunkers - as a substitute for the completely missing water - a lot on the level place.
On some fairways one has the impression that the members do not cover divots.
Greenkeeper, Caddy Master, Pro Shop and the Secretariat are very nice

Always worth a visit

Also at our this year's visit in July we were again very satisfied. Very good care condition, challenging place layout and a good experience in every way. As already described in some previous reviews, the aircraft, which are almost two minutes away, are annoying. Unfortunately we had on this day the wind from the "wrong" direction.

First of all: the place is a dream. Sporty and sophisticated always through the forest, it functions without water hazards. And in spite of the same old look (forest left, Forest forward, Forest right), it is not boring on the 18 courses.

About it: is after the airport's flight - who can pick it perhaps comes better when the planes land from the west coming.

Other Tags: high green fees, friendly service, practice facilities, strange Flown characteristics in the restaurant, nice patio on the tee before 1 Halfway House after the 10th

The very well maintained the place, old waxed and is playing beautifully, has been written suffice and I agree for the first nine holes to complete. The Second 9 we did not want to play it but determined to catch up with continued steady rain. Since it was still unclear at our registration in Sekretäriat if we were playing 18 holes, the nice lady kept our club passes to then settle. That you did and counted exact half price from. Perfect for us and not necessarily a matter of course.

This golf course was built in 1913 in the Frankfurt city forest. So you play in a perfectly mature - and equally well cared for - parkland. The place has been renovated several times and therefore meets modern standards of tee boxes, lengths, sculpted greens and deep bunkers, albeit without any water obstacle. No doubt: it is here to national top level. Still no start times are usually required - probably because of the high green fees.
Very nice and tasteful also the club house and the large terrace overlooking the first tee. Food and service are unexcited good, the prices moderate.
Praised by all dogs: the very friendly and competent service in the Secretariat.
But there is a much discussed negative point: the site is under the flight path of the new runway, so constantly aircraft noise is heard. I was not really bother's, have observed during breaks with interest the aircraft from around the world. But who is aircraft noise sensitive (or even over-sensitive), which should be on others - avoid places - worse.
Overall, for me 4.5 stars and a clear game-recommendation!

I do not want to write the usual paeans to any golf clubs in D or EU here, but it needs to do.

I've played in the last 4 years, approximately 120 clubs across Europe, but was NEVER as friendly as receive competent. although I was temporally restricted, as my son is in FFM in the hospital, me any game option was offered and despite the fact that Dt. Team has trained in the morning in FFM.

I want to repeat myself like the ladies in reception were so friendly that I thought this can not be but in a German club (I have already made negative experiences and documenting them) I was suggested to go to tee up and play, because I would not have to keep me on tee times, because the place was not very busy in the afternoon. There I met a couple members, the calling on me but to play with them if I wanted. This I did, what happiness;
The wax and place knowledge of the two players benefited my game.

For the reasons above, I was able to play only 9 holes, it was offered to me the remaining 9 holes to play at a later time, when I was back in FFM.

thank you again for this successful afternoon at the Frankfurt Golf Club.

I would like to knock on every case at the next opportunity there and can only anyone who appreciates friendly service recommend to do the same to me.

Do you want to afford

Today I had the pleasure to complete my Rhein-Main-round with the FGC. The welcome was friendly and my € 80 I still got a pitch fork and a small Birdiebook with modern 3D graphics presented. However, I was not on the three still plugged winter greens to 4.11, and pointed out 17. For me the normal green fee seems too high by at least 10 €.
The course is fair and has in places as wide fairways that even spreader as I cope with the tee. The 15 greens I've putted were, well maintained, had little brown spots, but probably for my taste tolerated significantly more waves, so that the cherubs is interesting.
The obligatory Logo Ball at Pro Shop for my collection had to be there, but cost € 4.50. My far the most expensive copy and not justified by the ball model.
Conclusion: Expensive, opisch beautiful, well maintained, not very varied. Can you play before. I have played my SpV.

I played the course on 12.08.2013. The course is challenging, but always fair and is in a really good maintenance condition! I would like to highlight the ladies and gentlemen of the Secretariat! I received a very friendly and met all my needs!
I can fully recommend the place!
5 stars from the North!

Nobel and BEFORE COMING!

I'm VCGler and still played in the halls and meadows with 100 years of tradition WELCOME :-)) Have a few days ago on the site of the Frankfurter Golf Club. By extreme heat the place was almost empty, so I had free play.
Check in: Very nice and even had an immediate Present: 1 beautiful Birdiebook, a logo ball and a pitch fork me club logo! I was totally beautiful, where do you get as a guest which first gave?
Green Fee Payment by Card: NO PROBLEM!

Before I'm on the first lap I still had something to drink.
Service / Atmosphere: Very nice terrace with great views of tea 1
The staff was also very friendly and attentive (wanted a glass with ice cubes in my drink this instead: VERY HAPPY :-))
Therefore do not understand the criticism of a Vorschreibers ;-)

Place: Very FAIR, very WIDE and really just STRAIGHT :-)
Sly balls I found despite dense forest over and enlarged by another fund my balls stock. State court despite the heat very well and green, the greens are partially nasty quickly.
Halfwayhaus to track 10: Also very friendly and speedy, could take a break because I had back free.

At level 13, I was unfortunately in a big storm and had to stop, luckily the Halfwayhaus nearby. After 1 hour under standing with the knowledge that there is nothing called the clubhouse and having been brought from Cart Caddie Master (Not: Running through the rain).
At the end there was the Club Manager or a coupon for 9 holes because of the crash, what more could you want?

Endfazit: FGC TOP, NOBEL and above ALL NICE AND EFFORTS! :-)
5 stars +

Unfortunately, for a round of golf on 1.8.2013 was not enough time, so we decided on a dinner on the terrace. We would then have been the first ever guests, but the staff apparently saw it differently.
Unfortunately, our decision was to have sensed even the slightest or even know that this restaurant only members of the FGC are allowed to visit, which was made intelligible to us by the staff without rebuke.
The homepage of the FGC GUESTS WELCOME are welcomed, but in reality you send them away flippantly.
Conclusion, NEVER AGAIN!
Andreas Kupfer, GC Dresden Ullersdorf

So it is not always, but mostly now. Nevertheless, the place has a good reputation and also due in. Old-fashioned and conservative but open-minded and playful, you can experience the landscaped parkland Cours and really easy he wants to even not arise. So it has its load or its fun, depending on their own form on the day. At the end, you reach a beautiful clubhouse with a stylish ambience and a mediocre at best cuisine.

Grown parkland course. Who contorts his ball to the right or left, has almost no chance to find his "own" ball. Unfortunately, a hole 11 to fly the balls of the driving range around the ears.
The green fee is 80, - up to € - 100 € a week, - € at the weekend by at least 10! Nevertheless recommendable!

Not because from time to time an aircraft has istman in the sky on this great area really feel to be "on vacation"
In fact, one of the most beautiful plants. Care, organization, friendliness. Here everything. And gastronomy.
Although on the whole space water never comes into play and it usually goes straight, it is not easy, because many places are just a little tight.
Anyone times "afford" a great place like .. € 80 during the week well spent. Maybe it runs so well on this day even!

Been to Frankfurter Golf Club e. V.? Share your experiences! 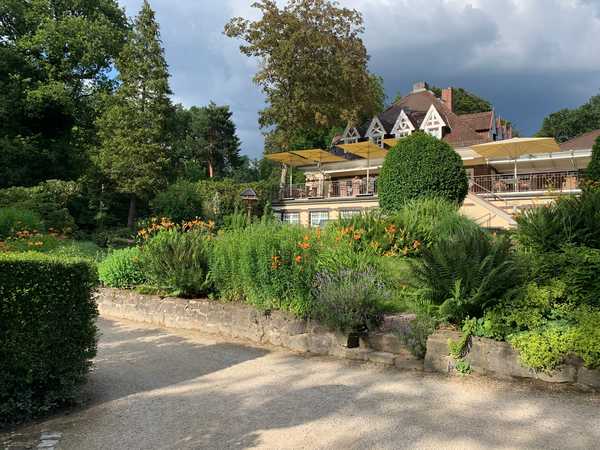