Played both 18 hole courses and enjoyed them both. Amazing that they are both good and also different. Long 4 pars and diverse. Anytime again

Played both courses over the 2014 Easter weekend and was disappointed with the condition of both and the relatively high cost during the Easter weekend.

The West course greens in particular appear to have a fungus which has left dead patches and which creates an uneven putting surface.
Consideration needs to be given to replacing the Green keeper.

This was not what I expected from a club of its standard.

2 great courses to choose from friendly staff and great restaurants.

This course is fantastic. 2 courses to choose from that gives you a challenge from any t-box. some of the holes great risk reward holes. Fantastic layout easy to walk and play. the best thing about it is the staff they are fantastic. Friendly and helpful and accommodating especially for a English speaking person like my self. They welcome me with open arms and that was my biggest bonus. Then food in the restaurant wow Reallly good. The staff is really friendly and accommodating. I know where to go when I am back in Berlin. Very close to the airport which is just perfect just 10 mins.

After a long time I played Stolpe West again. Despite the dryness, the course was in very good condition. The greens were a little slow. The place was also quite booked, so you had to wait at each lane, but the round was fun overall. But what I find really unacceptable is that range balls are not included in the greefee and you can get twelve balls at the ball machine for two euros.

Thanks for your comment. In fact, range balls are not included in the green fee, which I do not know differently from other golf courses. However, you should have received a few more balls to insert… More

Thanks for your comment.
In fact, range balls are not included in the green fee, which I do not know differently from other golf courses. However, you should have received a few more balls to insert your coins into - something seems to have gone wrong with the machine, for which we apologize. Should you visit us again, we will make up for it, please talk to me about it. Sincerely, L. Neilson

Stolpe has developed well and steadily in recent years.

Whether it's the gastronomy, the practice directions, the short course (with real greens instead of plastic turf) or the two 18-hole courses. There is a lot going in the right direction. What stands out especially compared to the other Berlin / Brandenburg clubs are the very good greens, which are always among the fastest and best in the region. Even in the low season, the greenkeeping always offers great playable seats.

Negative is actually only the permanent overbooking of both places on weekends, the many sponsor tournaments, a lack of pitch mark removal culture many (older?) Members and the fluctuating sand quantities of bunkers, on which one can adjust difficult.

As a multi-year member, one would also wish that change more game-related things on the course and not almost always only decorative such as paths, trees, Anpfalnzungen or the like. But that is already whining at a high level.

The golf club Stolper Heide has two 18-hole courses and a 6-hole short course. It can be reached from Berlin in about 20 minutes.
The played East Course is the newer of both courses. This is a classic parkland course. Even if the terrain is basically flat, the fairways have slight ondulations and the bunkers have been beautifully worked out. Overall, the place is very well laid out, and I especially liked the holes with the lakes (4,5,16,17). The fairways were in very good condition for mid-November and after the very dry summer, and the greens were impeccable, fast and consistent. The fairways are wide enough and the bunkers so well placed that it is always worthwhile to choose a suitable game strategy. The place is certainly not spectacular, but very well laid out and varied.
The staff was friendly and courteous and the food was very good value for money.

At the moment the greens on both places are not in good condition!

Currently the greens on both places are in no good condition. Furthermore, one does not need to look for his ball apart from the short mown.

Is okay - but there are better ones

We have played here several times. Both east and west.
Finally, however, the Westplatz -und come to the decision that one around Berlin better possibilities to the golfen finds.
The place was now in a state that can be called "okay".
Without the submarine bunkers involved in the evaluation due to the previous storms of the past weeks, the greens left much to be desired. From a great good-looking, they were unfortunately only bumpy and playful on closer inspection. It was clear to us, however, that bunkers were partially quarreled with stones under the sand in the size of 3-5 cm in diameter, and this involved the occasional notch in the wedge.
The place itself is sophisticated, but fair, if you play with your head and do not always take full risk.

The firing is the pre-politics of the practice balls on the range. 2 times in each case 2 euros thrown in and each and every 14 (!) Balls rausbekommen. Sorry, but this is rip off.

There was a lot of crowds in the square, and although we could see that we could not get faster due to two 4 flights already in front of us, we were shot permanently on 10 of 18 lanes. Play itself HC 6 and am of the opinion that one behind us not necessarily with its second stroke must go, if one thereby thereby danger to land with my or my fellow player beaten drive. Partially missing only 5-15 meters. Partly the balls hiss (fortunately distorted and then in the rough) past us.
If these players had not squeezed out somewhere after the round, that would have been a legitimate discussion about their mental state.

The exercise area (chipping, pitching, putting) is great. The range is good and has lots of tees, so everything is well distributed. Only the already mentioned ball prices are a "no-go".

The gastronomy offers a varied menu and moderate prices. The service was very friendly this time. We had different things in the past. But seems to have improved.

Our conclusion:
Can do - you do not. There are better facilities around Berlin. We will probably no longer make a stop there.

We stayed the end of June with our RV at the golf club Stolper Heide.
We make a golf trip with the autonomous!!! Caravan by Germany.
We do that already the 2nd time and have a good experience with golf clubs made.
Our goal is to play on any golf course and to use the catering evening.
We have had very good experience with golf clubs which by customers who play and consume were happy.
Our aim is to use not to find a golf course to campingplatzaehnliche facilities. We have a 10-foot motor home with private shower!!! and Smart Garage.
However, the board was the stumbling Golf clubs thought not glad to welcome and have made us of the parking lot, even though we wanted to play and in the evening also wanted to eat. But that was so and so is not possible since the kitchen is already closed at 18 o'clock.
We then drove to the Golfclub Kallin which about customer was happy.

I just played the Ostplatz on 29/03/2016. In the first 7 holes I had continuous rain, resulting in the square but little harm. The condition was the weather fully in order. Staff was very friendly and well-equipped pro shop. Definitely will not play the West Course.

The flat 36-hole course (2 x18 hole ever PAR 72) plus short course just north of Berlin more or less directly a few kilometers behind the borough of Pankow in a fancy new residential neighborhood in absolute tranquility in an open area. You have to on a secured through barriers Driveway parking (exit only with coin or code possible) Parking. The 36 holes have a departmental character and are of the well-known designers and Langer Rossknecht with all the trimmings that equipped a modern golf course needed so that golfers with claim definitely get their money. But also high HC should cope, although some balls should be taken in addition because of the coming into play of water hazards. The condition in my game early August 2015 was in top order and although I've knocked off Ago 7 clock that Greenkeeper were with the preparation of the East course ready. Especially the greens are very well maintained and was quite fast. The large clubhouse with adjoining golf academy makes powerful impression. The club secretary with pro shop in one is served as a guest very friendly from the lady. The green fee is at least on weekdays appropriate, however, set a little too high on WE. However, there are very favorable early bird rates and Sundowner. In addition, you get a discount with the Golffeecard. A surcharge for guests without hologram is unknown here thankfully. It is also recommended early in the morning to book a start time (is online possible), because the game was operating on a Thursday morning already at 7 clock very active. Especially when one of the two places is then locked yet due care measures. Members might be a bit more friendly in my experience. Who is near, the was recommended one or two rounds.

Of course, there are always improvements that here one is for open-minded and very far with the bushings. A beautiful grounds, a very attentive service, and on reasonable terms. The assessment applies to the on 13/05/2014 played West Course.

Been to Berliner Golfclub Stolper Heide e.V.? Share your experiences! 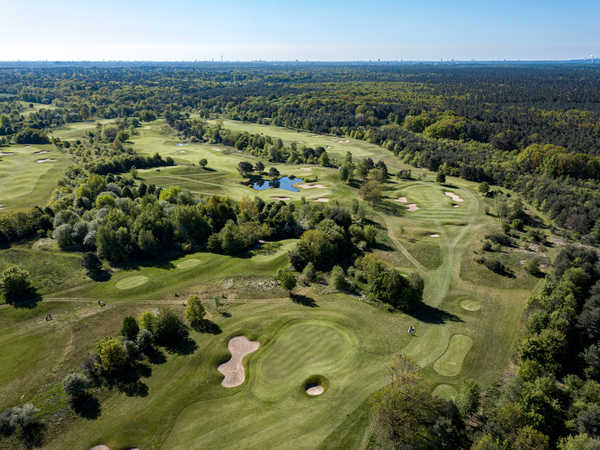