I played this course few times. It had their best years in begining and since that time it goes to dump. The whole potential of the course is lost. Problem there I believe is the ownership. Once you approach you see nice landscape. Parking lot, training areas all is close together. Prices in restaurant are big higher. Course is never crowded, reason is close competition with 1000% better service and quality. Prices for the fee are just average and I do not hesitate even say high, for the quality they offer. Orienting on the course if you play there for the 1st time is very poor. Very difficult to see where you can drive buggy. Where you have to play. On Sand course are horrible greens. I will not come back, there is more opportunities to play in region.

We were for a business trip in Bratislava and our business partner invited us to play golf at this beautifull golf course - 20 minutes by highway. First we tried the Driving range and than we enjoyed great golf. The course is on beautifull place, lakes, white sands, forrest. Club house is a bit small but good enough. The food in the restaurant was good. Nice and friendly stuff. I recommend this place.

The golf course is very nice, situated in the forrest combined with white natural sand and lakes. I loved the game there. We enjoyed the golf, sunny day as well as good food in a small club house restaurant. Stuff very friendly and healpfull. We will come back again.

Stunning landscape, feels like playing in Canada! We, my wife (-36), my friend (pro) and me (-18) played an afternoon sunset round in a magic atmosphere on the sand/pine route. The course layout is really difficult, sometimes beastie, sometimes stunning (18) - however most of the holes are fair, and with a slope rating of 150 you can play tactically with irons. The fairways are narrow, so if you might find your ball in the sandy forest, don't make the mistake and try to win distance with long shots from there! It cost me 8 strokes trying it several times, which at least entertained my flight. Some water is also around. Neat club house, with freshly made sandwiches, little pro shop, score savers available, stuff speaks German and a bit English BUT: It looks like this jewel was in perfect condition 5 years ago and now lacks guests and money. Only 5 cars on the car park on a perfect saturday in summer? Grooming is poor, greens were scarified with sand, bits and pieces are falling apart. For us it was perfect because we were almost playing alone here after we could not get a tee time in Bratislava or Austria. I definitely come here again with some friends to play the other 9 as well, and also in order to break 100 maybe 95 :))

CATASTROPHE! A good golf course was ruined by its owner!

We are avid golfers and play the best places in the world.

For many years we have been playing in Slovakia and we are happy about the great golf courses: GC Penati / GC Hruba Borsa / GC Worlds /
GC Sedin / GC Skalica...

You can congratulate the operators of the golf courses for the level, they can be proud of the quality of the offer and the care.

We also played the GC Black River and GC White Eurovalley. On Monday, 23.09.2019, after a year, we played again the GC WHITE EUROVALLEY in Malcky.

The place is in a desolate condition and not maintained. The greens are completely broken, the fairways not worthy of golf and the trails are sometimes dangerous for the golfers. We were very disappointed!

The golf course should be closed to the public.

In our opinion, this course is image damaging for the Golfland Slovakia.
Sepp - Austria

If you want to play a sport-intensive course, you are in the right place: it is one of the hardest in the world and not everyone can manage it :::

YES: The images of the golf course are a dream and YES: I fell for it and I will look in the future even more closely and read more carefully, because the paid money we have to book in the category "disaster fund". The last review here is from the year 2017 - and in 2 years, a lot can happen: in the positive as in the negative!

The journey is like almost all golf courses in Slovakia through a little welcoming industrial zone. However, in contrast to all other places played by us, one is then in a little appealing golf world. The brown-stained greens can be seen from the parking lot and at the latest here we should have reversed, because the place is unfortunately in a miserable condition. What a pity, because the small clubhouse is (albeit very dark) in a nice condition.
The club manager advised us to play the 9-holes "PINE" twice, because the 9 lanes of "SAND" would have been damaged by "Wild Animals". But already PINE is in a miserable condition! The grass grows out of the bunkers, the tees are probably mowed only once a week and the plastic mats between the tracks are completely on Semmerl. When looking for balls in the pines, you can still find remnants of former paths, which are now overgrown by nature. The greens are a green-brown Fleckerlteppich and we should have returned to the train 2, the cars and the money back. Our assumption: This is what a place looks like when the financial resources are running out. The white sand is gray-brown and the spectacular water around the greens and fairways is a murky water - hidden behind opaque reeds. The rakes around the bunkers are partly grown same thing applies to the benches at the tee boards.
Out of sheer frustration about the area we went out of spite despite the 9 lanes of sand. We did not really see the damage of the boars, but 3 tracks were a wetland, because it was allegedly due to beaver measures to a flood. On track 18 then also voles have been raging. Course maintenance has not been here for a long time - if it does, then these are just more "life-sustaining" measures and we suspect that simply ran out of money and it is just too expensive to rehabilitate the place.

And now comes the trick of the whole thing - I still give 2 stars! Because if you would take care of the place, then this would be really awesome and you would not have to hide from a Penati at all. (too much subjunctive?).

Very casual design with some fierce doglegs, mega S turns through the forest, a total of seven (!!!) par 5 lanes and big tricky greens. It would be a shame if this ends here - only as it has presented us, it is unfortunately only a matter of time. And the spectacular marketing images will probably not last forever!

The golf course in the unique setting of pine forests and local white sands will surely appeal to you. Pleasant clubhouse with restaurant. Within half an hour you will always come from the center of Bratislava, which is very practical.

Golf: Only about an hour's drive from Vienna you find yourself in a very different vegetation. The White Course of this 27-hole course consists of nine tracks "Sand" and "Pine". And as the name already reveal many, sometimes very large bunkers come into play or meander the fairways - sometimes quite narrow - through the pine forest.
Some beautiful doglegs and two original U-turn holes where you have to orient themselves in the first few games first.
Strongly undulating greens round out the challenge.

Place State: Unfortunately, at the lower end of the scale.

Conclusion: On a Monday we were felt almost the only player on the system. The seemingly little lack of financial resources are reflected in the general condition again and the proximity to the highway noise is technically no advantage.
All in all, a demanding course in beautiful nature!

We have for the first time and probably the last time played here last week. The place would not be uninteresting. Although the Lay Out Many holes have been enough food for thought. It was several times as exciting as things go on after the hit. And when, after 20 years of golf, 2x goes on a par 5, which is indeed embarrassing for us but somehow it fit the bill to this place. The course maintenance is not really great. Too bad, because it also give some beautiful and challenging greens. We look here for us a new place, just one hour from Vienna away, to have met, but that's it here for us.

Cool pool - 27 hole, great training ground, nice clubhouse.
We played the 18 hole course, this has been presented in great condition - the layout is spectacular, large greens with challenging putts, a lot of sand and a totally transparent finishing hole.
Only the course maintenance can in some (few) points to be desired, but overall it's really fun to play this course.

Lots of light and shadow but also

This Course is more than difficult to Rate! The condition, especially the greens were (just 9 holes on the Pine loop) a disaster!
Toral Stimpfe greens and unkempt bunkers! The sand round was much better then! No Greenkeeper far and wide! Think the lack of coal every nook and cranny!
But what you really need to mention is this acute layout!
This was designed to blend into the pine forest!
The sandy soil that towers Snow White dunes mountains between the trees in part, known otherwise only from the area around Lisbon or San Lorenzo!
Despite the lack of maintenance state should play the 27Loch Resort, which this landscape can be found only rarely in Europe!

Super sophisticated, but the course maintenance...

I played this course in late April. The slope rating of 150 is more than justified. Very narrow haircuts / fairways, deep bunkers and large waste areas, very large and undulating, sometimes extremely sloping greens. Best place were it not for course maintenance.
Hardly grass on the fairways, very slow and dull greens.
It may have been due to the season. Therefore, I will play the course again in a month and report it.
Normal 5 stars, but with better circumstances. We'll see. 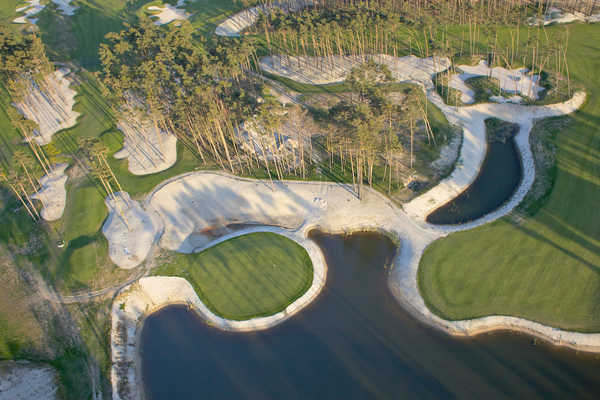