Royal cape was in relatively good condition (jan 2017), even after month of drought. it's a well organised club, friendly reception and a very good coffee shop.
The course is flat like a pan, has good bunkers and undulated greens but – and that is really regrettable – after you leave the course, you will not remember one hole. not one sticks out to be something special – a challenge. bottom line: it's OK to play but boring and compared to other courses in CT, too expensive for what you get.

The place is again in good condition and very well maintained. every effort is made to keep the system in good working order.
The greens are nicely undulating, bunkers are well placed and now and then there is water. there is a very old, loose tree line along the tracks, which means that there is a high probability that the ball will be found again after a miss.

what the space really lacks is some topography: it's flat like a pan. and somehow I didn't find the * royale *.
In spite of everything: if you are looking for a relaxed, rather leisurely round of golf, this is the right place.

because of the currently very good space status 4 *, but that very close.

I had higher expectations for the oldest club. Ultimately, a completely normal South African course with no special features. Price / performance is ok and a round too, but you don't have to have played there. There are better places in the area.

Back and forth between old trees

With all the time-honored and all respect for the Royal in the name, this parkland course is rather boring to play. The tracks run back and forth between beautiful old trees and you never really know where you are and whether you have not already played the track. The fairways are well maintained, but their grass is cut too long so that the balls hardly roll. That makes the place longer than it is. The greens are also well maintained, but difficult to read. I wouldn't say "you have to play it". There are more interesting and varied places around Cape Town. I rate the price of 850 rand, which I had to pay on Sunday, January 5th, 2020, as "proud".

... in South Africa, this club has existed for over 130 years. In the beginning it was reserved for the military - General Lieutenant Sir Herny Torrens was the initiator.

William IV first granted a golf club - Perth Golfing Society Australia - the right to wear the "Royal *" in the club crest in 1833. There are now 132 "Royale" golf clubs around the world that have been authorized by the royal family Wearing names and the coat of arms - Royal Cape is one of them.

Of course, there are more golf clubs to be found today that bear the Royal name without belonging to the illustrious circle.

The members had to move their golf course three times until it settled in 1905. Some improvements were made until 1929, which are responsible for today's layout - designed by Charles Melteno Murry. In essence, no major modifications were made, which is very great - that it shows its age and lets us feel it. You can breathe history on the course and in the club house - fantastic!

Today we go so far that we believe that such facilities as a whole have to be listed.
It is true that such courses can only keep up with modern facilities to a limited extent, but that is not necessary either.

Big tournaments are always played here, that alone shows the value and the importance.

The greens had to be rebuilt at the beginning of the millennium - according to today's requirements. If this work had been refused, the course would have been deleted from the host cities.

It is a well-maintained course that is currently ranked No 48 in South Africa and No 14 in the Western Cape.

We had a lot of fun even though we had to fight hard for the par, the wind was part of it. In 2002 we put tea here for the first time.

Poorly maintained fairways (severely dehydrated) boring holes, at least 4 holes strong car traffic, partly it saw between the holes made by site. We are disappointed. Positive: Greens and Clubhouse well. Buggy not necessary.

A not particularly nice place, boring, noisy, no good care of the fairways, no beautiful shade, we were glad when it ended.
The whole not even inexpensive, week 1900 Rand for 2 paid with ecart!
Royal is nothing here!!!
We never play here again!!!

I like the place not very good. Excellent are the greens that are fast and directionally stable and in top condition. You could still use some more modeling. The tracks are not very wide and it is really no great challenge to and fro. There is no single truly spectacular web to which one will be remembered in hindsight. Among the trees and next to the railway is so good ausgemärt and cut that you will find his ball quickly. The rest is average or below average: the fairways are partially strained right there are places with smooth earth. Even at the edge of the web, there are often places in poor maintenance condition or greater sandy areas. Now in summer it is probably too sophisticated to want that one has fairways where you do not play on hard ground but of short cut grass, in which beautiful comes under the ball.
It's my first place I play in South Africa. As Namibia I gespieglt a place, but the maintenance and grass condition was better (but worse putting greens had). I hope it will get better.

The strong wind has helped make the already quite challenging course was very difficult to play and the score was rather left to chance. The greens were very fast, but the maintenance condition of the tea boxes and fairways did not meet our expectations and can compete in any way with Steenberg or Clovelly.
Mustapha

You have to play

Beautiful and well-maintained complex. Do I have to take the golf program. Beautiful restaurant veranda. Reminiscent of colonial times or the movie "Out of Africa". Well maintained Locker Rooms.

Very nice old parkland course. Very well organized, good food in HalfWayHouse, unfortunately our caddies were quite unmotivated and unkempt, but that was the only downer. Long fairways and many obstacles, interesting to play, beginners have here is rather difficult.

Well located, but nothing special

We played the course on 18.02.2014 today. The lady at the telephone booking was very friendly and the reception at the club was above average nice.

We had received a tee time at 13:10 clock and were a little taken aback, as already on hole 4, a two-Flight pushed from behind. As a foursome we can play through the two ladies, of course. Now, however, it turned out that we were booked on the ladies round and more three-Flights behind us made us pressure and constantly played in his heels. After then we have another 3 Flights can play through, we were a little annoyed at the Half-Way House.

Then, the general came to managers and has proactively apologized to us and offered without that we have insisted that we be allowed to play again tomorrow free of charge. This is of course very accommodating and evaluate accordingly positive. Nevertheless, the Spielfreuede has yet suffered on the first 9.

Even otherwise, is the place for South African conditions in a rather unterduchschnittlichem care condition and also the landscape is not as nice as many other places.

He is ok but nothing more. Without the services, again to be able to play for free tomorrow, we would certainly not play the course again.

Conclusion: A fairly central place given to-metal with a very customer-oriented behavior. Fairwaiys are good, ok greens and tee boxes partly reminiscent of a cow pasture. The layout is also rather boring. He is playable, but there are much better places around Cape Town.

The place is very nicely laid out and play well without Kart. He is fair and you have a very nice view of Table Mountain.
The restaurant is top notch.

A very nice facility with a very posh club house. The oldest course in Cape Town.

Been to Royal Cape Golf Club? Share your experiences! 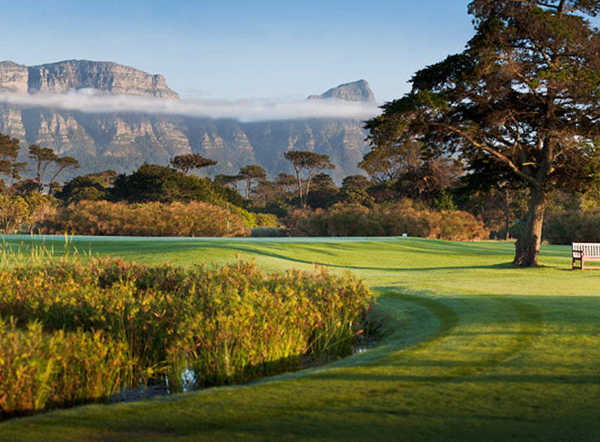