Amusing, if not an experience

The place has dried up, but looks like he has never been different. I was there for a short afternoon round, 9 holes for 120 edge. Due to the loud dispute between the caddies, who should accompany me now, a strange mood developed. That they did not fight each other was amazing. On the round it was peaceful and I was well advised.
Definitely only an option if no other program is available. What you pay for is what you get...

Can I only join the previous reports. Who is in and a round of golf is required to relax here for little money just right. Place and fairways still tolerable for this drought. Greens are in an amazing state. If the player has adapted to the correct speed setting of putts a 2-Patt is possible. 9 hole at 16.30 for 12 €, but I can not expect more. Before that, it is by the heat even a torment.

Oudtshoorn heard in the catchment area of ​​the Little Karoo, ie in the South African summer heat and drought. We have this place - played as our prescribing in similar circumstances. It's amazing how this still halfway fairways, although able to survive at subsistence level. But immediately before, after next begins the small Karoo. The paths are wide and so can, if advised of the direction, or a Desert strike bring up still acceptable. The greens are watered and reasonably well maintained. A web before a return. So it goes merrily without much change to the clubhouse. Standing between the fairways and a lot of old trees, still remain due to the monotony hardly memories of individual tracks. Clubhouse / Managment straightforward in personal union. pay and get started at the bar. Rush / start times None.
Conclusion: If you are already here then you can take the course. Price correction: 9 / 135.18 / 210 Rd.

Oudshoorn, gladly again with some humor and sunscreen

We played this course in February 2016 and were fascinated. At 40 degrees prevailed also not optimal playing conditions.
We were tough to take and wanted to play. Even when the club reached we were skeptical, only 2 cars, counted us. The club was opened and after a few minutes, a man who was in charge of everything was found. Geenfee, Buggy everything was there and there were people. Very nice but we had the same feeling that had the 100 year old club already richer event years. The place itself was fun with the Tolerance to exist at 40 degrees. Wide fairways and a keeper of the foresight our water sprinkler turns off when we arrived at the risk of "wet becoming" easier the game.
However, I have discovered for the first time garbage near discounts to this place in SA, the ignoring of us accompanying greenkeeper well Wg of tasks Total wit have played twice and we would play the course again. From a German perspective was greenfeeCARD negligible and the cheapest in SA that we played. 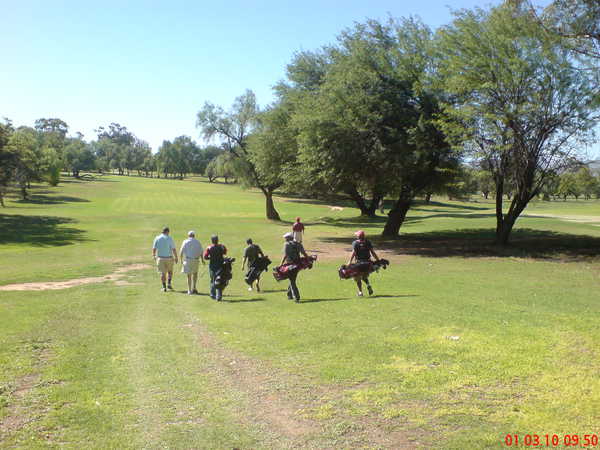