You have to play it first!!!

Have played the course twice between Christmas and New Year's Eve. We were in a 3 flight with HCP 5.32 and 34. There was something for each of us here. Certainly you cannot compare the course with courses in the south near Marbella or Estepona but for a nice 18 hole round it is more than acceptable. Greens were in very good condition. Also the fairways, the only deduction were the tee boxes. You should have done a little more work here. But all in all a great place for the price it costs and afterwards you have the opportunity to eat really great in the restaurant opposite.

Because of seemingly legal problems can be recorded for months only 10 holes. Staff in the clubhouse as in the restaurant very rude.

Flat course with short runways but not without!

For a green fee of € 33.- the place is ok. Short tracks but the greens are very well defended by bunkers.

A good Orkentierungssinn is necessary

For this course you need a good orientation.

In particular, the first 9 holes criss-cross. By nets and proximity to the apartment buildings also arises here not great atmosphere. The lanes are narrow and sporty not particularly demanding. The bunkers are way too hard. The greens and fairways were in August 2016 but in good condition.

The second 9 holes correspond more then a golf course. They were also built until of 2006. By some water obstacles the game becomes more interesting. Greens and fairways were good. Bunker too hard.

The driving range is already an impertinence. Not only the ugly nets, but also the numerous masts for tensioning the networks nerves. Big Übungsmöglickeiten there is not. The balls are more expensive.

Overall, I find the golf course is not good. Guests Robinson Club should avoid rather to other courses in the area. But the holiday is too short

How many times have you the golf course on your doorstep? Without arrival time we were able to immediately start from the Robinson Club. The lanes were green (not dried out brown as in the Golf Club Santa Clara), maintained the greens and the ambience tingling. The fact that the Green 3 to 4 tee with the bag along the sea and the beach bar of the Robinson Clubs must march, was especially casual and probably unique. For us, the entire package was perfect - Robinson Club - Golf on the doorstep and Culture in Granada.

The place is located in the Los Moriscos Urbanisacion Playa Granada, near the town of Motril. Originally, this place had only nine holes, diesich extended to private property. After the construction of the present Robinson Club and numerous condo complexes, the nine old fairways were apparently turned over and added nine more. Especially in the first nine holes one has the feeling that the tracks were crisscrossing applied where there is space between the houses. Long distances are the result. Times, you run a complete orbit around the direction of play and then play back immediately. Following on from that, several hundred meters along the beach through the garden of Robinson Club to the next tee. After two tracks again on the road to the next open area for a few greens. Everything pretty wild.
It was only the second nine then feel like a golf course.

In March 2012, the fast greens were in pretty good condition, who saw mostly wide fairways and tees from mediocre.

The whole place is completely flat, and despite its location on the sea can only be guessed from a slightly elevated Abschalg the sea - too bad. Four to five tracks are quite interesting - the rest is rather boring. Two larger ponds bring some pep into the course.
I found disturbing the fact that almost every orbit of apartment complexes and houses was surrounded. The protection of buildings many nets were set that, while certainly useful, but always feel a vemitteln on a driving range to find.
And where I'm at driving range: The range of the club is pretty much the most spiteful thing I've ever seen in practice facility.

It remains to notice that the club house is nice seaside. The reception is to offer no unkindness. Wordless obtained a score card. Explanations, etc. Birdiebook: None. Marshall also a starter or there is not. (May have been due to the low season ...). The entire place has only two toilets.

Conclusion: If you are living in the Robinson Club Playa Granda place for you to play a round OK. Los Moriscos otherwise is not worth the money and does not golf fun.

Nice place, do not sporty sophisticated

The site is located directly between the Robinson Club and the beach and is easy to play on. You can see the sea on your lap and unfortunately no one has not much of a really great location.

Only the water obstacles bring charm to the game. Unfortunately the greens were (in October) not in good condition. The grass on the greens was almost as long as the aprons end and the holes were small Graterringe take the pre-kicking and ball herraus. This has not changed much in about 2 weeks.

The price performance ratio was not very convincing. One has the impression that in the place and the facilities for 20 years, only the most necessary is done. No comparison to the other places in the area.

To play mainly by guests of the Robinson Club Motril who get extremely discounted green fees.

A golf cart is not needed, because the entire area is situated at sea level.

Been to Los Moriscos Club de Golf? Share your experiences! 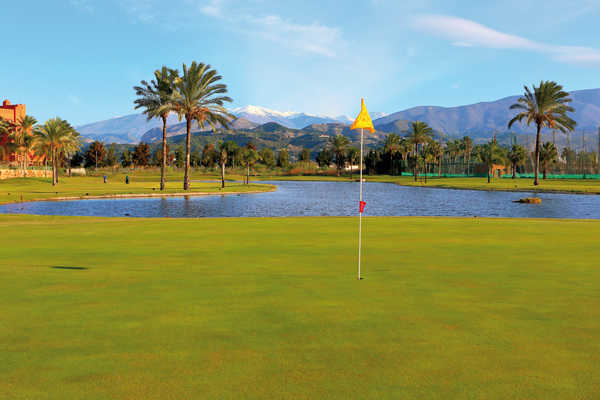