Must play for exprience

This course is just beutiful. Sure it punishes you for bad tee shots but what is most important is that every hole is different from the last and is it challenges you to think. Wonderful experience.

Place was in a very good condition, some holes are definitely a challenge, the greens are fun.

What we did not like: the pricing - as a foreigner you have to buy a license, the green fee is very sensitive.
The infrastructure: ladies' wardrobe without windows and air conditioning, although new. There were no towels, no hair dryer - there is also no possibility to attach a possibly brought hair dryer. Even though everything is newly built.
The restaurant is also overpriced and you should avoid it from the service and the quality. The whole area is a bit prickly.

Our conclusion: if you want to say that you played the Ryder Cup place 2018, then you should play it. But there are some wonderful places in the area which are really an experience and where it is also fun and pleasure to let the round in the golf club or restaurant end.

L'Albatros is one of the most beautiful and not easy to play golf courses on the European mainland (as well as other facilities designed by the architect R. von Hagge, such as Les Bordes, Le Kempferhof, Royal Mougins, Bogogno etc.).
Although several improvements have been made since the opening of the course, I have been moving around Guyancourt for some time. The reason for this is the obvious rippling off of golfers without a French license (about 40% surcharge to the orginal GF for FFG-licensed). I would be delighted if the Golf National's managers with this, in my view, unfair pricing would suffer the same shipwreck as years ago the GC Bogogno with a similar disadvantage for foreign players.
Fortunately, there are a few good golf courses in the vicinity of Paris with a decent Preispolitik (Clementon, Courson-Montloup, Château d'Augerville etc.) and from mid-July to mid August La Boulie [Racing Club], Saint-Nom-la-Bretèche, Saint-Germain-en-Laye, St. Cloud, etc.) and thus interesting alternatives to a completely overpriced round at the Golf National for foreigners.

Care condition for the season very well. Greens super fast and directionally stable. For a good score you have to stay on the fairways. Was twice in the rough, just brutal. Secretariat and starters very nice. Looking forward to the RC in the Golf National.

Has The National Course and future Ryder Cup course its great strengths, especially on the last 5 holes. Especially the first nine are partly optical boring!
Although the place is always difficult to play, but the design and layout he can keep up with the old precious meadows in Paris in no legally!
The 4 star there is actually only for the water rich finale...!

We have initially played September a round at the sister site of Albatros... Albatros will be closed for renovation work during the 2018 Ryder Cup to September 2016. The course was in good to excellent condition. In part, the Greens were indeed brown and spotty but that was probably the heat of the last few weeks. Still very directionally stable... The reception was like you knew it would always wish that, the young man was very nice, explained everything to us, still in demand after the round if everything was good and and and and without which it was uebtrieben. Restaurant okay but you do not have after the round necessarily indicate... very long wait... needs improvment for the Ryder Cup. Place and reception always happy... Restaurant jein...

We, all single Hcper have played the course many times and in all seasons. The course is a challenge from the difficulty as I have not played one in Europe, where everyone learns to know his limits. Greens are always very fast. Some of the tracks in the links style other Florida stage style. We were now playing a week before the French Open. The greens had since been 10.5 on the Stimpmeter. Green fee prices were for daily green fee at 100 EUR. The score just do not take so important and have fun. 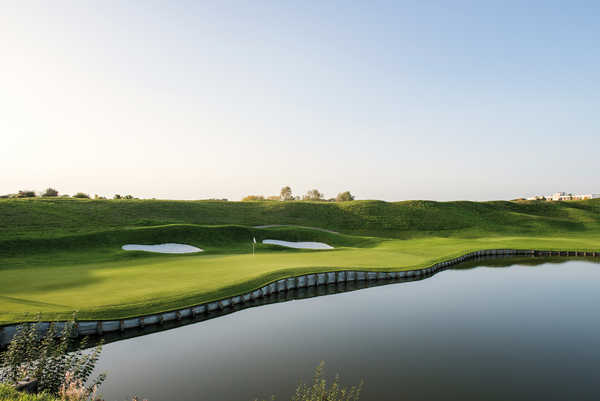