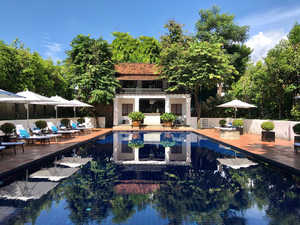 ... who has a bad care condition. Fairways very dry, burned and different grass types. Small greens reminiscent of a volcano.
Our caddies were very nice, but were initially surprised that they should show us the putting lines.
Due to the dryness, the partly beautiful old trees are very dry and lose their leaves.
Price performance ratio is very good. 2,000 bath / person incl. Cart and caddyfee. Cart is not necessary, the place is flat.
We enjoyed the day and would visit the place again.

As street circuit worth playing and cheap

The Lanna Golf Club is part of the Thai Army Sports Complex and is located in the middle of the city. Now (early March 2018) the place is very dry, it is hardly watered and at the end of the dry season, the fairways are sometimes rock hard. Many deciduous trees, so at this time of the year also a lot of foliage. The place itself is quite old, according to "old-fashioned" the layout. The entire staff was very friendly and helpful, the Caddyladies partly at an advanced age. Friendly and experienced, there is no rum with the iphone around or constantly powdering the nose. (as I have experienced in North Hills) To emphasize is a restaurant with very excellent Thai food at low prices. Who wants to play in the city, I would advise to Lanna, place and club is compared to the other city square Stardome two classes higher to settle. It is also the cheapest place in Chiang Mai at all. I can imagine that he is a really beautiful place at the end of the rainy season. Maybe he will be more well-groomed then.

The Riverie by Katathani 5 stars