We played Laguna golfcourse for the first time. It is a very nice course, renovated 2 years ago and well looked after. The whole course is challenging, a lot of water hazards and the greens are perfect. Caddies and staff very friendly and helpful.

Great place, which is heavily frequented, because everything fits all around. What I personally find very good is that there is no compulsory cart there and you can go 18 holes. I find (HCP11) the place not easy, if you play white, but that's ok. Having a few balls is good as the water hazards often come into play. So far, on Phuket, together with Red Mountain GC, clearly my favorite

Space is very heavy and the staff unfortunately unfriendly

We took an extra one-hour drive to play the Laugna Golf course.

Unfortunately, the theater started on the first tea. An unfriendly older gentleman, apparently the Marshall of the place, has clearly pointed out to us that our clothing of such a place is unworthy.
We had normal golf clothes on, with which we have played other places in Phuket and never had a problem. After a somewhat nerve-racking discussion and after consultation with the manager, we were allowed to start 10 minutes later.

But everyone who plays golf knows how good it is for their own game if they have to fuss with such people before the first tee.

After 9 holes we had enough and fortunately got our money back for the other 9 holes.

We can only judge the first 9 holes and found them (both very good golfer) extremely difficult. In our opinion, the hardest place in Phuket and the surrounding area.

We recommend the drive to the Blue Canyon Course.

Everything is a little different here.

We played here 6 times in mid-February 2018. This golf course / club differs in some ways from the other places on Phuket:
- He is always jam-packed. In the other places we have practically always played alone and were in 3.5 hours through. Here we have always had other game partners and a round lasts 4.5 hours.
- Most players are playing here, which was not possible at the other places. The course can also be run very well.
- Anyone who still wants a cart can take a cart for 2 people. The caddies are then on the back (!).
Nice golf course. Pretty short holes, especially on the first 9. For some tight and a lot of water. On the first one you should let the driver get stuck.
Elevated, very heavily undulating greens. As a result, infarct strikes rarely remain on the green. Who controls his Lobwedge, is the king.
Overall a 5 star rating, even if he can not compete with Red Mountain and Katathong.

My personal No. 4 on Phuket

Very nice place with a variety of holes, friendly people at the reception and at the Pro Shop In addition, a top caddy who knows not only the place. Have completed the course on foot and she even made sure that I drink enough.

Good news: The somewhat somewhat outdated golf course, situated directly at the Banyan Tree Hotel, has been completely redesigned. The fairways were supplemented with additional, sometimes treacherous bunkers. The greens were modeled and are considered to be very challenging. Especially in the first 9 tracks one is confronted with lush water hazards. The course is now likely probably the PGA world class and one of the top 10 are in Southeast Asia. Here a special thanks to the two Paul. Paul Wilson established as club manager and course designer Paul Jansen. Pro shop, locker rooms and showers are modernized to a high standard and the friendly caddies supplement the total picture.
Much work has been spent on irrigation and drainage systems, a major theme in a tropical climate with heavy rains often. The training areas for putting, chipping, pitching and driving range have also been expanded.
The Laguna Golf Course is mostly flat and thus practical for older players. The newly created paths along the fairways now allow the use of buggies for all fairways.
Conclusion: Coovie recommends - Play and have fun!

At the wrong time

Unfortunately, the place is rebuilt by 2015, we could only play the first 9 holes 2x, but that has not taken the course to its appeal. I would definitely play it again, because I had 3 years ago and times of pleasure as he was just super!

The place is really ok

Hi, So in my experience I find this place very enjoyable and fun to play!
Reason, layout, design is a good mix ausHerausfoderung and yet a good score to 82 is possible.
Only the total cost of just under 80 € is a bit too high for Thailand! 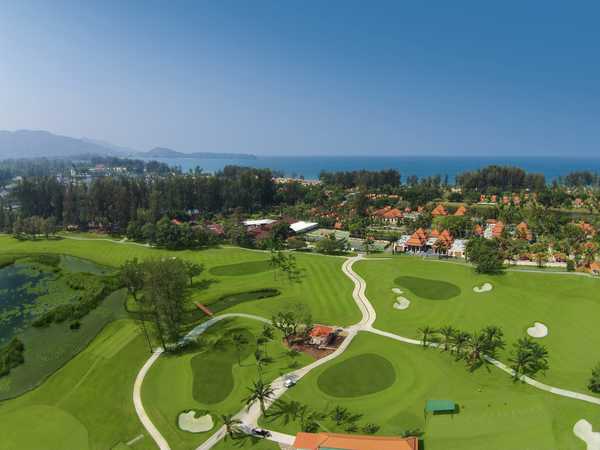