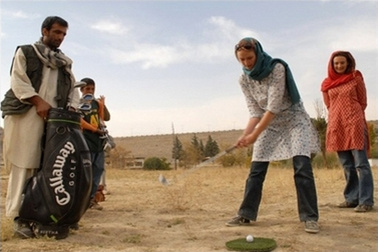 The Kabul Golf Club was founded in 1967 by the family of the last King of Afghanistan. It lies in a beautiful valley near Lake Qargha about 7 km from Kabul. It is a desert course at this time lacking grass on both fairways and greens. The course is open as weather allows and is played mostly by golfers from the international community in Kabul. An effort is underway to raise funds for the restoration of the golf course, its infrastructure and facilities. Rental clubs are available and all golfers are welcome.

I lived in Afghanistan in 1966 and 67 and was involved in the construction of the course. I am now 81 years old so my memory may be a little dim. Before the course at Qargha was built we played golf on the Buzkashi field. As I recall the king "loaned" the land for the golf course at Qargha Dam. Several International companies provided heavy construction equipment and help in sprucing up the club house. It was a beautiful setting with the lake just behind the club house. We had "browns" for green in those days and used various lengths of water hose for tees. Tees were used in the fairways as grass was sparse. We hired the local boys as caddies and babas (old men) to keep the green smooth.
Robert K Michael