Scenic Golf by the Etna

I played on 27 December, a cold sunny day under the snowed Etna. The experience was rewarding - a fantastic round of golf almost alone on the course, except towards the end when we hit traffic. Their landlines were out of order, so I had to take a chance and drive to the resort without a tee time and pay cash, 80 Euros for the green fee and 40 Euros for the cart. They accommodated me very easily. The drive from Taormina, some 45 minutes, is a nerve-wrecking chicken game when you cross trucks and other cars through the narrow streets of the villages on the road to Castiglione. But all, the price, the drive and the risk were really worth it! The course is well appointed, with demanding tee shots that require accuracy with the driver. Several holes are scenic and exciting. The course is balanced and makes for a fun experience amidst olive and lemon trees, old farmhouse stone fences, and black volcanic sand. All the way, the towering white Etna presides over your game. Unforgettable!

Location of the place breathtakingly beautiful. The course is really demanding, as some blind blows are needed. Course care except for little things really good. Green fee was really expensive for the place with 90 €. Gastro was disappointing. But an eagle on the 16 made the day perfect

Beautiful golfing at the foot of Etna

Have 9.9. played an 18-hole round. A scenically beautiful and demanding course, precise punches and fitness (if you run the course) are in demand. Wonderful views, great ingrown tracks with beautiful vegetation. There was not much traffic, so a good opportunity to really enjoy the round! Good space after a long summer. I'll definitely be back. MH

We enjoyed the round, no one before us behind us

We played the course in November, a total lack of care in many places. Holes edges were knocked out by flags, no water over Wascher, tee boxes were like a cratered landscape. The course is varied, many blind holes and narrow fairways. The view of the Etna on many holes compensates somewhat for the relatively high green fees.
If you sometimes take a cart on vacation, it makes in this place most sense.
What surprised the good lunch in the club restaurant. Unfortunately there was no logo balls.

the place is very varied. precision is in demand! but also here and there a few 220m carry to lie well - very tactically holes on some. when we were there: nursing degree ok - green something bold and inaccurate - clubhouse something askethisch but sympa - good mood!

Have played the well maintained Place 4x in September, fast greens and exceptionally friendly club staff. A varied! Game, between olive trees and grape vines, mostly with Etna view. Track 13 for example, through a ravine to the green. The square, u with all its tracks. The hotel is located in beautiful secluded location in the middle of nature, pure relaxation!! Club restaurant is run by 10-15Uhr, daily from the outside it looks sometimes like this.

I played the course on 26 April 2016th Course was in good condition (fairways top, greens a little long but fast). Many holes look relatively simple, but often are not without. Course is 5500 rather short, some Par4 under 300m... but it is demanded accurate play. Water there little, but very nice set most difficult hole (430m, Par4). All in all a beautiful course.

We have just come back from Sicily, have played the course 4 times, all in the best condition, great fairways, great greens, the second nine are more difficult and more beautiful, one does not need Driver, 3 wood it is sufficient for the length, precision game is extremely important

Sooner perhaps once been nice...

As a conclusion of our trip to Sicily, it should be because of the good reviews of Il Picciolo.

The reservation by mail worked very well and the staff in the office, the caddy master and the waiters in the restaurant were very friendly.

The plant is actually created very pretty and varied, much parkland character, which is in Sicily the exception. This was the cloud cover at the height of the flags of course is not the fault of the club, but has also tarnished the game.

Without some knowledge space paths are hard to play well, but therein lies the usual stimulus for a second round, which we pinched (see below). There are some blind tee and precision is much more demand on the Picciolo than length. The differences in height can be done comfortably on foot, but you should already be in shape. At 35 degrees in the shade, I would at least have been thinking a chart...

The restaurant had, of course, as usual in bella Italia, only 12.30 bis 15.00 clock hot food (all golfers to tee off before 11.00 clock?), But there were good panninis to high prices by 6-10 €. However, the quality was really good, one is as a golfer so used to being squeezed some more.

As an absolute impertinence I look at the state of the place, probably just practiced on an armored brigade. Huge holes on the fairways, large areas that are completely destroyed and more ground under repair, as one would like. The greens are mowed and bad Putten was pure luck.

The bunkers were filled very hard and with countless stones. Unfortunately, players have their share of the blame, for what was lying around there at Divots, I have not seen on any place. How can a real golfer a divot of 20x40 cm firstly produce at all and secondly not to travel?

A green fee of 80 € (Trolley € 5) is justified in any way and I would have the space currently does not want to play a second time for the half. Either that was a coincidence or the club there is a lack of money urgently to bring the space in a reasonable state.

Now, after 16 years of golf I have again decided to play by white.
It was a mistake by lush trees and shrubs grown the fairway sometimes you could see little. The narrow lanes did the rest.
Nevertheless remains a great place that gives me a lot of fun.
Top condition, and by now built hotel on the plant better attended than in previous years.

Golf at the foot of Mount Etna

We have this space - a venue of the Sicilian Senior Open and the oldest golf club in Sicily - on a Monday recorded in March 2013 and it was - as already mentioned in previous comments - relatively little going on. So you could play in peace - without being harassed or aground. Is probably also on the location of the club. Catania is still almost an hour away by car, and so should probably most likely people from the area of ​​Taormina are among the regulars.

Unfortunately, the views of Mount Etna remained closed to us because of the low clouds. Still a beautiful parkland course with mature trees, narrow fairways consistently that require accuracy, several elevation changes, water hazards and beautiful greens. Even if the course is not very long, so it is still not easy. The driver you need absolutely nowhere - unless you like constantly shouts "Fore". Despite the temporary differences in height a cart is not necessary - unless you are really bad foot. We were traveling with golf bags and did not get really short of breath. Unfortunately, there is little between the holes "next hole" signs, which is sometimes very nerve-wracking. We have a couple of times "run" and then ended up having to take the orientation to help the scorecard. Getting used to the lava rock is also among the grass floor. This feels when walking partially on, like going on a expanded clay hydroponic and it needs a few holes to get used to while hitting the balls in it.

Staff was very friendly and helpful - even if English was spoken more bad than good. Also the tee time reservation by mail in advance worked great.
Pro shop and restaurant we have not visited, because we have made us more equal after the game on the way to Palermo.
Maybe next time.

I played the course 2 times in March 2012. During the week, there is nothing going on and you can enjoy the views of the impressive Mount Etna in peace. The place is not very long but the narrow fairways tw very difficult. Very onduliertes terrain makes the round of golf is the sport. Himself was traveling with trolley. Staff is always friendly and Restoration average. Found the place extremely beautiful and would always come back.

I played the course in March 2011, there was very little going on (Sunday) there still require a green fee of 80, - € (is probably connected with the forthcoming Senior Challenge?). When I pointed out that on the Internet but 70, - am, was not even responding, there is seemingly no interest in whether you come back. The clubhouse is an old building, looks quite nice, but inside it was rather cold and barren - a club or a restaurant ProShop I have not discovered.
The course itself was in average condition, the greens are not well maintained. Perhaps this is due to the early years? The site itself is attractive and quite hilly (thereby also quite athletic and exhausting for Bagträger). The distances between the holes I personally think too much, they are also quite badly or not signposted. The search for the next tee was correspondingly time-consuming (especially between 12 and 13). The views of Mount Etna are naturally beautiful, but justifies such a high green fee? Of course - compared to Donnafugata (where 150, - €), it is still relatively cheap, but compared to other places abroad but much too expensive. Sicily is certainly never as a golf destination. But maybe that should not even be...

My conclusion: the place is too expensive, the Pei-performance ratio is not right.

I played the course several times in August.
Then at about 30 degrees is a little off, the staff is always friendly and the place in a state herrvoragenden!
The designs is great, lots of doglegs require a strategic game, but also shorter holes where even beginners can celebrate successes, the green fee is still appropriate.

We have the space recorded in July 09 The reservation by mail worked fine. Eletkrocars are scarce. Despite huge day in summer temperatures over 30 ° is the requirement rich 18-hole course with refined obstacles in a good condition. Large height differences between the tees. jack @ gee-ing. ch

Been to Il Picciolo Golf Club? Share your experiences! 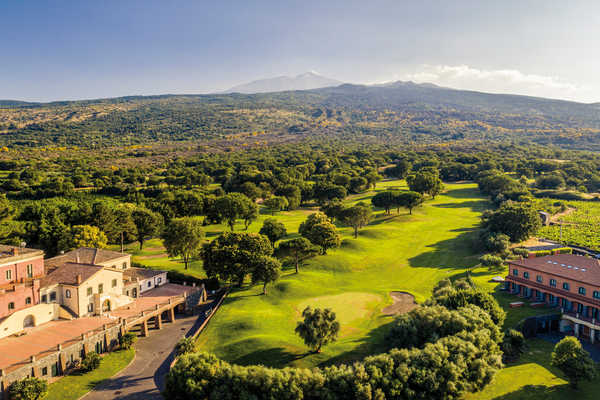