Can you make, but you do not

I can agree with the previous comment so far, the staff friendly and the food is decent.
Also in terms of frequenting the facility.
The accessibility of Berlin from is rather tedious. Since it is faster for other facilities in the area. This may represent different if you live in the south of Berlin.

With regard to the place we are, however, disagree.
The system is suitable for beginners and average HC, because the space is very short and certainly not really challenging.
Only web 8 requires an exact match, since the left side a Wasserhinderlins lurking, but this in itself is not a problem if you keep to the right or the green meets directly, which is not too difficult.
Disappointing was the condition of the greens, which, however, already hinted at the play on the practice greens. The green was clearly too high and thus too slow.
The frequency on the field is very strong, which meant that we for 9 holes of a mere 2,000 meters (or 1,800 for women) long square actually two hours to be precise, took 1 hr 55 min).
To make matters worse for us that we had a 4p fligth before us who had demolished a full path after the second web and in spite of everything would not let us to 2nd through play. We were thus waiting at each train 10-12 minutes.

Our conclusion:
We were there and have a say, but must not go there.
The 3 * we forgive only because of the friendliness and the general ambience very nice before heading to the square.

The golf course is short, but not easy. The fairways are neat, the greens are great. The views, unfortunately, in some directions not very idyllic. For this, the plant from the southwest is very easy to reach. Green fees and membership fees are average, the agreement attractive partner club, the handicap short unbeatable. The place is very busy, the generous practice facilities also. Friendly staff, well-stocked pro shop, reasonable restaurants. Ideal for beginners and Feierabend golfer, but by appealing to the green fee vouchers for the advanced player. Overall a very nice, relaxed, friendly atmosphere - not snobby, elitist, etc. Thumbs up! 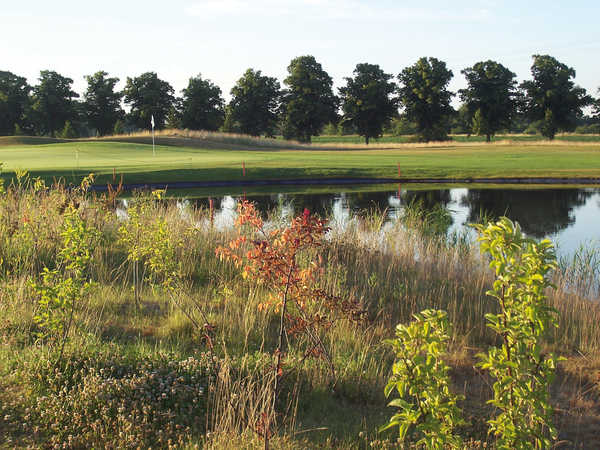