The entire facility is family-run and you can tell that too. Here someone really put their lifeblood into it. Very friendly welcome, good description of the place. If you are not good on foot, an e-cart is recommended. It is sometimes quite steep up and down.
The fairways are laid out in a relatively narrow space, which means that the overall space is short, but not to be underestimated in terms of difficulty. The place is well maintained, the greens quickly. The highlight is of course the tee off the tower on the 7th
It was a beautiful day. We will definitely come back and recommend the place to friends. :-)

Already after the first visit we decided for a remote membership. The golf course is quietly located in the Austrian mountains. The place is exclusively tactical to play and always very interesting. Also for single HCP players. It is also a good place to go for family-friendly and civic gastronomy. Daisy from the service is a dream. The rooms partly in small houses are simple but with all necessary and with dear decorations furnished. Latest flat screen fensher and terraces to sit and enjoy the Euhe. Towel changing every 2 days are not usual with the cheap room rates with unlimited golf.
The breakfast is sufficient and it has been rated very recently with full grain very much. Cakes, yoghurt, fruit, fresh sausage, cheese, eggs, o juice. Ideal for a refreshing break before you can relax on the hilly 9 hole course. The family Schraml, with their natural warmth, will soon be able to take away the guest (who is received as a friend) from everyday life. The proximity to Passau is also great and there is in the house tennis courts and a fitness room, so is something for everyone. Great is, if Franz senior a certain details at a joint round! The green fee agreements make a membership with great tournaments very interesting!

This is really nothing to add. For early May an excellent condition, very friendly reception and little "traffic" on the square. Good conditions for a gently relaxing round of golf.
The only downside was that the reception was not pointed out that the tower is only open until 5pm and you can only play "from the bottom" (I had asked to pay extra for the tower and was not pointed out that the After 5 pm is no longer open)

Especially with good HCP players, you can be HCP to prove. Accurate play tactically, with risk everything is demanded. The course and the greens are very well maintained. Genial when the senior partner takes time (what he likes to do) and go to the round. Again and again great Battles.
Passau is just a hop and you can play golf and watch the city. What's great for us as we travel with children and my wife plays tennis. A climbing wall and tennis courts ad the plant always round off a holiday. The food is delicious. The rooms are rustic, modern and very clean! visit absolutely and knock the tower. We will be back!

We are now one of regulars who are when they drive to Passau home and visit friends. The 9 hole course is great integrated in nature and no hole is like another. Whether novice or practiced, a little luck is needed indeed always, but can relax total you look. The place is run hilly but good. What makes the place so unique hole 7. As you play from the tower (about 25 meters high). My husband regularly skin with the hybrid on the Green, but each time it makes again fun. Accommodations are in the tower or in the various buildings on the property. Our Favourit the Troatkasten. Ideal also with a child. The food is delicious and reasonably priced. Everything is very warm and friendly. Breakfast is everything and you can start the day as well. We are always delighted when Franz and Regina to switch off with Franz Junior and sister Sonja.

Great Place in a family atmosphere

We loved the entire system, the 9-hole golf course, the location on the hills overlooking Passau, the fine food and cozy atmosphere.
We come again any time.

"Over the roofs of Passau "- a fitting name for this course, even if you can only imagine the roofs.
On this roller coaster makes golf fun if the condition cooperates - therefore prefer an Electro borrow. Otherwise precise game is announced by most tees. Extreme slices or hooks should be punished immediately, the balls disappear "never to return"in the forest. On some tracks respect to other golfers is paramount, are mentioned here mainly tee 3,4, 6 and 7, as well as the fairways of 8 and 9 Although cross in the square only the fairways of 8 and 9, these are but entirely cost. Not so with enumerated rest. At a slice or unclean Met ball on the 3, the Green the two come into play should just allude or even putt it can be dangerous there someone. The four runs parallel to the 3 and there the green is played blind over a hill. A large bell signaled subsequent flights a free Green on the 4th lane 6 leads uphill to the tower, the hill is but at the same fairway for the 7 - again, caution and consideration is called for.
Something strange is also 8 and 9 Who can attack the Green 7 from the tower as a hitter, an eye should have the discount 8. Drives from the tee 8 are initially no problem, but then comes the 9 used together with the fairway into play. The greens of 8 and 9 are separated by only a few meters, which means that you must run back almost the entire fairway to get from hole 8 to 9 tee. Although it is due to the terrain but still somewhat unhappy.
But the Gulf Tower compensated for adversity. This "radome" is something for heights and really unique. The four floors can be easily overcome by lift and then the player expects a completely different dimension. The discount is covered, but the large opening in the direction of impact suggests the brain a 20m chasm directly in front of the tee. I myself am not afraid of heights, so I was a bit queasy, was on the second round, then the tower closed due to rain. What a shame!

Despite a few oddities deserves the 5th star!

Not only the tower is unique, but the entire 9 hole course.
Also the team no matter where is unique and nice.
An oasis of relaxation for body and mind.

Will often live and golfing.

Have tried for the first time the discount from the Gulf Tower. So something sensational has the golf world not yet seen!
We could on any round expected to hit again from the top - and then the breathtaking views of Passau. We've played a lot of places, but this is a world leader.
Promised, we will be back soon.

Discount from the tower

I also have tried the discount from the tower - a sensational experience with adrenaline.
The entire system is in perfect condition and then the good food in the clubhouse.
It is always nice!

The new tee from the Gulf Tower is absolutely sensational. Something unique in the world. And then also the great view.
Try it!

Have the weekend handicap passed yay. From the end of the course, I can only recommend everyone wants to learn to play golf. Thomas and Franz have much endurance and very quiet way to bring it to a. Mfg. Irmgard Grauvogl (Seidl)

The square is also again this season in a perfect condition. Kudos to the Greenkeeper team!
As some clubs should pick up in the area times advice.
We look forward to the holiday through the roofs of Passau and over again for years now and are already regulars.

Time out over the rooftops of Passau

Small place with some Herrausvorderungen, just for starters. Cute family business with a rustic kitchen. Rest and relaxation are guaranteed

An unconventional place with great service

The place has its own character with some original tee (eg, lane 2 and 6).
Have less I like the narrow and often opposing lanes as well as the change from track 8 to 9
If the space is initially described as "undulating", I believe you could "easily" be happy emphasize that.
The ideal places to stay locally in some quaint cottages, as well as the service and food at great prices are. In the Sexxer Alm I would just like to witness a celebration - a brilliant atmosphere.
Excursions can be made, for example in nearby Passau.

Absolutely fantastic place with breathtaking scenery, beautiful rooms directly on the plant, very familiar atmosphere and good food, it's off, here you feel totally at ease 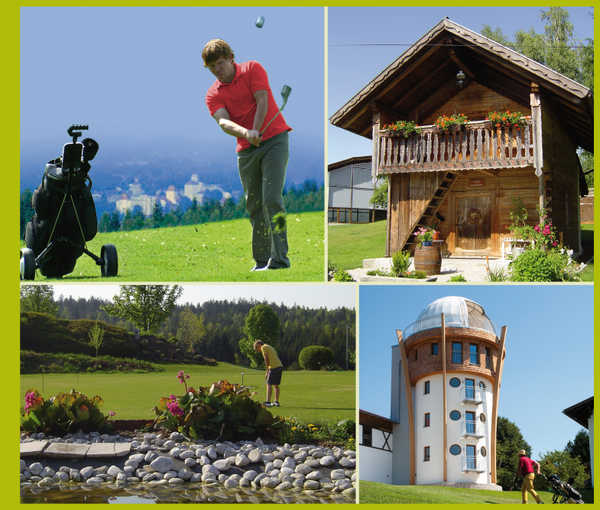