Eichenried golf course is my favorite course (I also play in Coachella Valley, CA Vermont and Savannah GA.) The plus is the fairways, greens, challenging hazards. It is not a "short" golf course, Par 3's are mostly 200+ yards.
It is not a course for high handicap players, but very exciting for golfers who are competitive.
It is flat, easy to walk & carry.
Perfect course to be a member and play during the week however it is not a scenic golf course which should be recommended to visitors looking for view of the Alps.

Really a great place (A + C) played. The water - especially on the C-course is challenging. Unfortunately, was probably intensive care day (Friday 17.5.2019) because almost on every lane( pursued ;-) me the mower, that was a little disturbing. But the staff always made space relatively quickly, so that you could continue playing quickly.

The club house and the food was good and in good weather you can relax on the terrace.

The summer of 2018 was really good. Played in mid-September.

Against this background, it is not really understandable why the place presents itself in a rather moderate state.
Since the excuse can not apply that just space A is rebuilt in the field of greens and possibly amplified BC is played.

The plant must meet a certain requirement if presented to the outside as one of the top facilities.

From tour level could this September unfortunately not rudimentally the speech.

The combination was played BC. The tees partly wavy, the fairways "okay", the bunkers a "no-go". Rather than raked, these were rolled rather flattened, which in particular at the green bunkers has a significant negative impact.
The bunkers of the practice facility were just like that, so that one can certainly save practice beats there.

The greens are by no means tour level. There was at the same time (for example in Riedhof or Olching) a much better condition.
The proximity to the airport can be felt by occasionally passing aircraft, but this was not considered to be overly disturbing.

What is unpleasant, however, are the power lines that are to be crossed several times or run parallel to the fairway and annoy not only visually but also acoustically by a constant "pinch noise". Personally, I do not like to be exposed to a heavy current load for hours, which certainly makes everyone feel different.

Putting green was good, chipping and pitching area as well as the range as well.

For me personally, it was a "I played once, but I do not have to go back" experience

About this place nothing comes to mind negative. The course is in very good condition, greens are tracks properly. Before the BMW open space is very demanding. The rough is longer, the greens more difficult. Otherwise you can get a good score on this course.
For the young, the club offers great training facilities.
The site is located north of Munich and the airport. As in other reviews of the aircraft noise is noticed. But he has hardly disturbed. The Strommästen can be found on the fewest holes. I should once again be in the Munich area, I will definitely pay a visit again.

Not worth the money

I have the same opinion as cico97. The place was very good for this kind of weather.

Space may not really meet expectations of a tour place!

If you expect a tour place, you will be a bit disappointed.
The whole system does not give the impression that here regularly plays the European Tour. Tour level looks different and compared for example to GC Lärchenhof (Pulheim) or St. Leon Rot falls the golf course Munich Eichenried significantly.
The space (A / B) has indeed landscape not really a lot to offer a few interesting holes, but. However, the electricity pylons and the aircraft noise are not really disturbing. The greens are super and absolutely consistent.
Bunkers were in a very poor state, (many stones, not raked and extremely hard) and neglected unusual for a Leading Golf Course. The club staff and the Greenkeeper were very friendly and helpful. The gastronomy and the clubhouse are really good.
The question remains why BMW here the BMW Open performs and does not select other far better places in the Munich area.

Of course you realize the BMW Open and but their effects such as nursing condition, drainage, etc. In addition, any "noise" such as catering, club office, Marshalls on a top level and the place in all combinations an experience!

Tip: If you get the chance to play the course in the two weeks after the BMW Open, definitely take advantage of! First, there is the place in the combination only at this time and secondly, you realize - defused despite the "defusing" greens and rough, fairways wider) that the professionals operate another golf as we amateurs ;-)

I played the course on the B / C round for the first time. What I have seen and experienced, has led to me no longer interested in the A-course!

The place was at the time (mid-March) in good condition. Especially the part strongly undulating greens were pretty fast and challenging. Other challenges are the numerous bunkers and water hazards, as well as the "length" of some holes.

What brings the European Tour at this place, I can not understand. Is probably only the BMW sponsorship. The fairways on level ground are unspectacular and somewhat monotonous. Only the third hole on the C course has something. The narrow green is defended from the front by a pond and bounded from behind by a forest nerves primarily cost, but balls.

Otherwise, the place is marked by some "ugly" pylons with power lines, a lively air traffic through the Munich Airport and a perpetual noise of the nearby busy main road.

Finally, an experience the first tee. We were 1 hour in the spiral ball on the first tee and waited for our discount. Just at that moment we were on the series, there was a 2-Flight of the A-9 of course, claiming that you can knock off first because you were on the round? That may well apply, but the 18 holes that day was B / C and non A / B.
Anyway we had to wait another 10 minutes until the two gentlemen were out of danger and we could finally start.

The course Marshall was very friendly and helpful. However, he had some trouble with these "special" friendly members. It succeeded in only at the green of the first track to pull the two out of circulation.

Everything about the golf course fits perfectly. Secretariat friendly and professional. The A course is very beautiful and interesting. C course rather boring. Greens are challenging and well maintained. Price / performance ratio was not but overall. The living space of the BMW Open

Worse than its reputation

The first impression, clubhouse, Umkeiden, secretary, etc. are at a high level.

The situation is different on the court. Uninspiring, monotonous paths. The fairways were only in moderate to poor maintenance condition. Only the greens are challenging, as they often fall off the edge and the ball does not get to keep it there.

Totally inappropriate, we have felt the power lines that cross many paths from which to hear and was a permanent hiss.

From the square we expected more.

A very flat terrain with beautiful fairways, no doubt. Also for me the BMW Open have aroused the interest.

Relatively fast greens where the ball is still good but to bring to a halt.

However, the lack of signage hole but I have very disturbed, because the game was so difficult to classify themselves partially with laser. Here's a clue would have been nice since I have to give my speakers right.

The locker rooms are very spacious and very well furnished.

Emotionally, however, the place was compared to my last visit last year in a little worse shape, everything (eg the lack of signage) made a slightly looser feel love, I hope this is not a trend.

Nevertheless, I think the place in the totality of well above average. For the restaurant was no time, so I can not comment on this.

The green fee is a bargain not just because the club is still benefiting from the name.

The life of reputation

The place is not cheap, relatively boring, but neat.
The kitchen is well below the expected level, simple card, pasta without cheese, without bread, little choice. The service was very friendly and nice.
The marshaler should exercise a better Headteacher or guards profession. He is an absolutely unfriendly alls and constantly on the look-out and exhortations annoying to not work anymore.
My home course is there so much better, nicer and cheaper of course, the last one is not the problem. But if I take it all together - the members I do not know of course - well worth the effort for more than an hour drive and everything else not to visit this place again.

Great location, great place in a perfectly prepared state, the driving range of the finest, truly an experience. The changing rooms very nice.
BUT: bad service, at such a price green fees should you automatically get a Birdie Book for temporarily missing hole signage, or at least be made aware. Just for golfers who are the first time on the system, the description of the holes is critical. The restaurant is very nice only the quality of the food is well below that of a hospital cafeteria. Terrible, an insult to the palate and can provide completely incomprehensible to me how to put on such a great investment as a bad restaurant can.

The place in Eichenried lives of his Renomme, for many years, the only place here ET Tournament held in Germany.
The course has 27 holes in three loops of the course, which will be played at the BMW Open, but is made up of holes of all three loops, so thus can not be played normally.
Exception are each two weeks immediately after the tournament where you can play the Classic Course in the correct order.
The course itself is flat board, but by good course design challenges he has nice and beautiful fairways.
But very ugly are the running almost anywhere on the court power lines, including poles, one has on the half-space the feeling that one's hair stand on end, to it buzzes insistently. Another shortcoming is the very expensive green fee.
My conclusion: BMW Open Fans should try to play the Classic Course in the period after the tournament, otherwise it is in the Munich area for the same or less money nicer places.

Already has its reasons which the BMW Open is played there...

The plant in Oak Ried is really very beautiful and successful. Very, very demanding. There is so much I do not PAR 4 below 300 meters. Some PAR 5 have over 500 meters and are really very sophisticated. The place is super kept. This is simply play golf at a high level. Only the power line hum can interfere with her in the summer, but that's it for now. Otherwise expects here a really nice and sporty challenging course. Is beautiful especially the one through the hole 3 times 9 (A, B and C course) his 18er round each time can recompose and thus has a lot of variety. The training area is great for improving your short game and is also very well maintained. 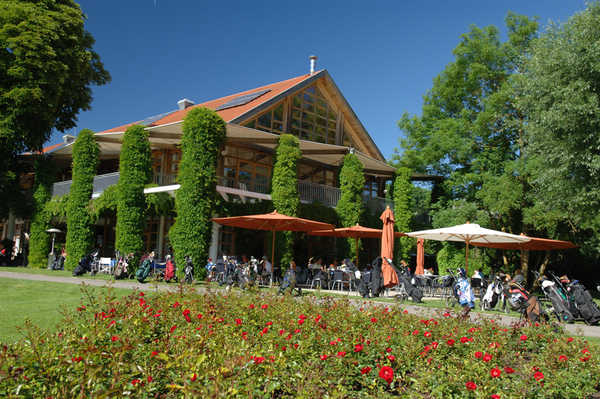