Great course!
Nature was wonderful!
Worth the money and well laid course.
Friendly staff.
Fun to play and not impossible.
We had a great time and I would play anytime here again.
Suggest a cart... a lot of ups and downs.

... and his son have almost simultaneously built two places in the region - this is not in the top 100 of France.

However, he is almost always on the list when we play in the region. That may be because it was the second course we played in France in 1993, a year after its opening. It's also our first Trent Jones Sr. course we played.
It is deceptive, the holes usually run in heavily overbuilt area - American pattern. The house-rich are partially covered by dense tree-rich, which makes playing here to enjoy.

The layout is good, exciting, but not one of his best places. There are a few holes that are really top. The course itself has grown on average - the par 3 are usually short, as well as eight par 4.

He is in dry conditions ring to play, because you can give the driver a break, provided you meet the fairway. Often the landing zone is narrow, only a few bunkers are needed in this area.

It's true, they usually have trouble with care and maintenance here.

We always like to play here and accept the shortcomings. Despite some terrain transitions very good to play on foot, also the Clunhaus ready joy.

Esterel is an old narrow and very heavy square! Especially the shot to the green and the putt is very challenging! I found the place absolutely worth playing. Esterel has a typical RTJ sen. Design of the 80 years! We connected with Esterel Valescure to a 36H day!

The clubhouse with the terrace is tip top. The course takes place between various buildings throughout Resort. The houses are not very close, behind the trees present. The place is not really in good condition. Probably there is no money to do anything on the site. The maintenance is neglected. Bunkers are not sure made every day. The greens are OK. The layout would be really good, too bad about this place.

... But rather not for beginners. The driving range is far away, so that one is "hit" with brushing and chipping can.
Unfortunately, that's true with the dogs only up to Handtaxchengröße. A place to plan and do not get, so you could let the dog even in the parking lot. Last of all, even the restaurant had closed (19 clock).
So recommended for pure play, otherwise rather not.

Last week we played this place. The tracks are short, but often fairly narrow, the mighty crowns of pine fishing to some ball, especially the greens are guarded by large bunkers and sometimes very strongly undulated. So be nice and exciting. But: the way to the discounts are often long and often cross roads, no driving range, putting green only. And above all: On several panels were working on the bunkers (refilled), so the greens were only partially playable and a train was even put on wintergreen. This was not told before the round, let alone that the green fee - after all, 75 euros - would have been reduced. The reaction of the staff, we have raised it after the round it: shrug and large eyes. Therefore, only 2 out of 4 possible points. Roquebrune near is much better!

It pays to play this course. The design is interesting with beautiful mature trees. However, the place some holes was extremely moist and it ran long distances on soft ground, from where you could hardly play and the machines could not mow with deep ruts. The green fee was therefore reduced significantly. playing nevertheless made great fun. The bunkers are very used to, perhaps because they have only a 2 cm layer of sand on a hard surface. Right bunker shots are so hard to execute - the club does not go through the sand. Two long Par 5 holes are a real challenge with its beautiful design.
It would be nice if you could also eat something after the round in the clubhouse located on the beautiful terrace, but the kitchen seems to be barely open. I would recommend playing on this course anyway, the beautiful surroundings of the place and the nice reception compensate for some negative points. Every time again!

Today I 30.12. the place for the first time played. What kind of weather ;-) Ca. 18 Gard... wowww The place is very varied. Interesting layout. The only negative was... Most of the fairways were very matchig... even though it had not rained for several days! The neighboring site is apparently not have the problem. Nevertheless, I would play the course again.

Technically very demanding, but great area with mature trees and beautiful surroundings. The place is basic, comfortable and fun. 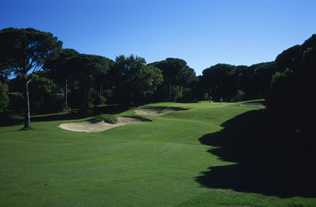