Overpriced and under prepared

It's not such a bad course, but at +/- €80 it really is way overpriced for what it offers. There are too many short par 4s of 325m or less (6) which is not a real test. The information boards are rudimentary, at best. If you take a buggy you have to stay on the driveway, which is always on one side of the fairway. So if your ball lands on the other side you can be faced with quite a long walk, relatively speaking, to and from your ball. This slows everything up and in dry weather, when the ground is hard, is quite unnecessary.
The course was scruffy and needs more work from the maintenance staff. This doesn't require much imagination - just a stronger sense of determination to improve the presentation.
Finally, the prices in the bar are a joke, or to be more polite, a not-so-gentle rip-off.

I won't be playing this course again!

Played the front nine (the only open holes) in Sept 2012. The course should have reopened in April, by the end of August, and at the moment one did not know when. And as I understood it they then are going to close the front nine.
I would guess the course really needed some renovation. Soft greens unkept fairways. It is as so many courses in the South of France short, but the play is fairly simple and the views are not so great. I would at this stage not recommend anyone to pay som much money for so little golf as it is at the moment, almost 60 Euros. Then there are nicer 18 hole courses for the same price in the region.
I just hope that the renovation of the course makes it better and I would for sure give it a try when all 18 holes are open.

The layout would certainly have earned four stars - if it weren't for the proximity to the busy road between Valbonne and Roquefort. You have to cross this road between tracks 2 and 3 at a completely confusing point (50 km are allowed here( everyone who has ever driven a car in France knows what that means); left and right, each in about 50 meters secluded curves; on not a single sign on the street telling golfers to cross the street!).
The tariffs for the green fee are heavily discounted depending on the time of day. That's good, but also necessary: if you're willing to pay €100 here in the morning, you should rather play the beautiful and challenging St. Donat course for €90.00 or the venerable Monte Carlo golf course for €30.00 more.
And it's played slowly, but the place can't do anything about that.

A very beautiful place that is lovely and well cared for on the outskirts of Valbonne. A lot of flair and atmosphere are added to the beautiful design!

... lies this course, which was realized by Donald Harradine in the mid-60s.
He is a master of his craft, as one of four founding members of the British Association of Golf Course Architects.
The other three are: CH Cotten, Hamilton Stutt and Fred Hawtree.

We know many of his courses that he has built in tourist regions, this one is for us rather one of the weaker - unfortunately.

The not quite flat course with a few thrilling trous lies in a quiet area - apart from occasional motor vehicle noise - is surrounded by a lot of forest.
Many trou are narrow, it is not a place that loves the driver, a wood three of the tea is usually ok. In addition, the four doglegs are not designed to play on attack, the risk of losing the ball is too big.

Since our last visit - 10 years ago - they have worked well on this course and rebuilt a lot.
On the second nine was partially changed the game sequence and the Trous 13,15 and 18 newly built. The work seems to pay off, but it takes some getting used to - as a final hole a par 3.

As many times as we have been here we do not know, the Cote d'Azur was at the beginning of our "golf career" the spring training center par excellence. The package Parcours-Hotel-Gastronomie has always fit, as well as this week.

In concert with the courses in the region, he unfortunately can not quite keep up - solid four stars.

Play early in the morning

The course itself has not changed for years and maintained its good level, it is still nice to play and makes fun. In recent years, however, the frequency has greatly increased and the general playful level is, as an inevitable result of grassroots sports also dropped here, resulting in the addition to significant delays in the flow of the game. Who wants to enjoy the place should rather early in the morning and play outside the golfing season. Then you enjoy it.

A nice place with great surroundings

The course is located in a slightly hilly region and is beautifully embedded in the landscape. Very varied fairways, fast greens and well maintained. Ideal for the holidays but sporty.
The staff and club members spread a pleasant atmosphere, you feel good. Nice Proshop, small hotel right on the square, everything very relaxed. In the town Valbonne invites the old town to a stroll. So you not only enjoy golfing.

Here you can really play golf. The course is very varied and also offers single hdc real challenges. Everything, really everything is in a very good condition. The greens are lightning fast and make it fun. We also played in Grand Bastide, but Opio is a class better.

Another word about the Resto, nice service and delicious food at fair prices. Definitely after the round here.

All the charm of the Côte d'Azur

Although the greens were sent due to the weather in the week before Easter, the place had lost none of its charm. No fairway resembled the other. Already that is a feature that many other places miss.
Exciting integrated into the topology of the environment delight the fairways with high tees or even high greens. Admittedly, at one point or another I would have liked to at least mind an electrically powered trolley.
Definitely not for dumbbells.
Totally recommendable and therefore no five stars, because there is still an increase upwards.

Played in October 2017. The square and its hotel are beautifully situated in typical Provencal hinterland. Partly hilly tracks and curious doglegs, but mainly beautiful holes. The first two holes are still a bit badly in the area, but from hole 3 onwards, a really nice and challenging course with varied and well-designed courses (4-8,10-14). The green fee is high, but fair for the region, especially compared to price / performance elsewhere in the area.

We stayed at the hotel chateau la begude very well and enjoyed the place. beautiful scenery and surroundings, a nice old town in Valbonne 5 min. from the place with good gastronomy.
All in all worth a trip.

A little peak and valley,

Having played this course a few years ago and both the maintenance condition and the layout of some paths were very disappointed, we wanted to see the beautiful natural space after rebuilding again.

Now a beautiful, well playable space (exception: Distances to hazards absent on the tee panels), quite good maintenance at the end of the season (only many birds pick holes in some greens).

The reception unfriendly, even rude - a gentleman 'Jean-Marie' - which is well-staffed completely wrong: a Wildschweintreibkagt meant that hole 1 were locked up. 9
The hunt was reportedly announced at 11:00, we had phone after 11:00 reserved for 15:15 and not heard.
Then we round was offered 10-18 to play twice, so do not even reduced at a price; and that Mr. Jean-Marie wanted kassierrn even € 72 for the round obeohl after 15:00 clock costs 59 €.
Weak we also found that about 3 years ago newly designed paths are 15 to 18 still not detected by the GPS..
Opio Valbonne so better steer clear!

We found a nice, well-kept place in front of a beautiful landscape. One can easily walk. Highly Recommended.

Great Place at the Côte d'Azur

We have played in our vacation this place 2 times. The site is located in a beautiful landscape. The adjacent forest attracts balls to some magical. The tracks are mostly hilly, but playable without much effort. Unfortunately, in August 2013 a few holes were still in renovation. The hotel's restaurant on the golf course is absolutely great and always worth a dinner after the golf round.

Yesterday we played this beautiful place. Because some cars are renewed we paid € 55 green fee. However, the car with 35 € for our understanding was very expensive.
Otherwise, we can only agree with all the assessments.
Gerhard

Who wants to play a beautiful and challenging golf course on the Cote d'Azur, should choose this place. It is beautifully integrated into the landscape. It is interesting to play and remains a challenge to its strategy. Seemingly light holes are much more difficult than first thought. The beautiful forest at the edge of the fairways also sometimes calls his tribute to the balance of the balls. Some streams adapt wonderfully to the tracks. Especially nice is the Preview of the web 15 with a view of the former aqueduct, the old hotel and the restaurant. On hole 17, it will haunt... the balls fly wherever they enchant the witches. (The hole is currently being rebuilt Winter / 2010/2011). The tracks 12 through 15 are sometimes very wet. Unfortunately, on this course it should be noted that the repair of pitch marks in southern France is a rarity and the greens very suffer.
Overall, I can only recommend Opio-Valbonne. The landscape and nature is beautiful. It would also be nice if you would be notified before the round that some holes are not currently playing full (repair etc.), a reduction in green fees would be appropriate... If you play this course, you will not be disappointed.

Been to Golf Club Opio Valbonne? Share your experiences! 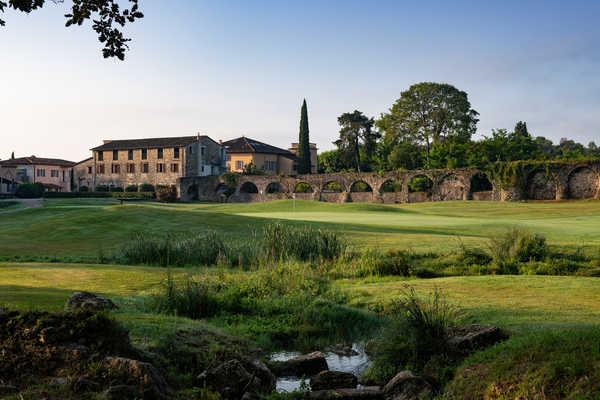