This place was better

With 5 women - all very good players - we have this place up to and including February 24th. J. played and were, apart from the blue course, not enthusiastic. The state of care was significantly better in the past. Some of the e-cards had no scorecard holder and the trollys had no brakes. If there was a brake, it didn't work because of rust.

Great! Has proper parkland character! Not too hard, but also not to "pass by" to play. Gladly again!

We played here three weeks ago. It was very busy, but the staff was exceptionally friendly and competent. The overall condition was good, the greens not badly maintained. Good vacation spot for after the winter. Some tracks are really interesting, if a bit short. We had rental clubs that were in very good condition. We would play this place again.

Not for long-hitters and shooters. A well-kept place, which is very narrow, almost always elevated has quite small greens, which are very difficult to play because at least when we were there was very hard and everywhere sloping down. Since a GIR is quickly the Doppelbogey because the ball just does not want to stay on the same. Do not be fooled, a 240m par 4 is NOT to be driven here it's an exceptional one.

31.07.2018 (11.9), red and yellow course.
Agadir and the nearer surroundings are perfect for playing golf in summer as well. The sea breeze keeps temperatures at a pleasant 25 to 28 degrees C. As few people know, you can come and play with them right away and usually you do not have to wait anywhere.

Place:
On the driveway, I was positively surprised by a greenkeeper with foliage blower. That's it but then soon, with positive regard to place maintenance. The complex is beautifully landscaped, with many (presumably) artificial hills outfitted and some strategically placed ponds. In terms of feeling, it is not very long holes that are to be recorded. You can also walk this place very well on foot.
The signage could well grow a bit. The sketch of the system on the Skorkarte is also not sooo Zielführend and, the hole overview of the tees can barely guess in which direction it should go. But obstacles can not be recognized. Since these can not be seen on the hilly terrain, it would be an advantage to be able to locate them on the billboard or in a birdie book.

Place State:
Now it's getting crisp. The fairways sometimes have up to three different grass types. Mowed or uncut, the game pad then doubles to six variations. Bald spots not counted. On the yellow course probably the "longer" was not mowed. In any case, the grasses had flowers on which the bees were bothering. I avoided a tea box because a whole swarm of bees had spread on it. Not feeling good at the tee when it's buzzing around the legs all the time.
In places one found repaired areas on the greens. Too bad that these repairs were not made with the same grass that already "lies" there. Also on the greens you can find two different types of grass. The transition from Vorgreen to Green was in places very adventurous. Mowed too short and then burned in the "heat". The greens have a decent speed, but are not consistent track loyalty.

Conclusion:
A nice place to play, which would do a bit more course maintenance. Also, the signage may be more, as well as a birdie book that deserves this name then.

Caddy is not mandatory

After the negative reviews from the previous year, we were reluctant to play this course during our stay in January this year.
Because of the interesting architecture of the place, we decided on a round and were pleasantly surprised: The fairways and bunkers were in excellent condition, as were the greens. Only the haircuts would have to be revised once. The driving range as well as the practice greens and bunkers were in order.
The caddies were ok.
The club house including sanitary facilities has been unchanged for 20 years. This is however secondary if you only go there for golfing.

12.11.2017 We (Hcp 7.1) have played the course in glorious, dry weather. No caddy duty.
Good driving range. Friendly and fast handling at the reception.
The fairways were in poor condition, a lot of large Glächen with sand without grassy vegetation and if a little green overgrown only very thin. It's a pity the worst place in Agadir at the moment. We have canceled the remaining, reserved green fees.

A very nice golf course.
The place is like all places in Agadir very good.

Absolute plus point for me is the playing through the Eucalyptuswälder, since I find this wonderful.

The normal to good golfer misses nothing on this course.

The French want to keep to themselves

The course is similar to Soleil. In fairly good maintenance condition. However Caddy mandatory as in some places. These in turn are very listless and calling prefer instead to take care of the golfer. In addition, German are not just preferential treatment and friendly

The place is well playable and has many fine holes. The condition is ok, could be better in many areas. The caddies are good and worth their money safe. Unfortunately, we saw no Marshall, who observed the game speed. 5 hours is just too slow for this place

Have now played all 27 holes and were themselves very pleased with the place. Mature trees, interesting fairways fairways but not in mint condition in part - necessary improvement.
Greens were not in the fastest state, but on the whole, but a very nice place.
Caddies excellent care for course maintenance, clean bats, etc. etc.
In the restaurant you can eat reasonably well, wc catastrophic.

The direct neighbor of golf Soleil (lane 4 of Blue Soleil borders on the yellow square of Dunes at) manifests itself in a slight decrease in maintenance state, which relates to the fairways. Many dry and bald spots, even in the fairway, not just at the edge. For more varied terrain.

I have played on Blue + Yellow (after we hung the last tracks on blue behind a slower group, the caddies have colluded apparently, that we go to yellow, the other to red).
In total, 5,079 meters from the yellow tees that we have run in 2:40, despite the occasional waiting. My record time so far, I think that even as a single player.

Except for railway Yellow 9 the obstacles were just bunker today, but very many. On the yellow obstacle course it was also more uphill and downhill and there were some significantly higher lying greens, as well as not necessarily viewable sinks (a real crater, with privacy, in a dogleg Par 4 is perhaps a little unfair?).

Caddies are mandatory here, Minimum Price 70 dirhams. Necessary, they are also, because there are signs for the next tea anywhere and trajectory tables or distances are also non-existent.
Although I was only a little English and German, but that was enough for conversation, had my stroke lengths pretty good shape with respect to bat proposals and also took care otherwise to all the trappings as Putlinie show, raking bunkers, divots cover etc. very well. Find Besides the balls were the impact proposals often good and variants that I had not tried, but they were able to fit, even if I could implement not always right and then but a few feet missing (chip and run out of the woodwork where you can practice something like this?).

Have played the square 2x, red and blue and red and yellow.

Orga is sometimes a bit gruff, but the driving range very central. Putting green is a bit inconvenient.

The place is nicely laid out, the greens are great and undulating, sown on the fairway always something thin. Great ambience with palm trees and plants. The place is not so long, but it is rarely straight to the ball, so you can practice good documentation here. Precise game more important than the driver. And without bunkers will not get you around.

The caddies were ok and very helpful, one needs to consider holding only that you live on.

Club house is nothing special, but ok

The most interesting golf course in Agadir

I played Soleil, Ocean and Dunes, for me, the Dunes is the abwechlungsreichste and interesting golf course in the area: Hilly, green, well-kept - we must not forget how warm it is in the summer, so my compliments to the Green Keepers.

Fortunately, there were mainly athletic golfer, HCers over 100 were present at the Soleil more. No rounds that lasted more than 4 hours. I would also recommend the weaker golfers another Plarz.

Among the caddies: I've played 7 times in Agadir with caddies and found the fantastic: apart from a ball that landed in the middle of a water hazard that every ball found. Always had a recommendation that you play a hole at the top and helped to read the putting line (speak French helps a lot). I have no problem to give € 2 for a birdie when they are engaged and help when playing on an unfamiliar place. The welded together (like the pros on TV, not like at home). Unfortunately, I also had two little interested caddies, who then get less.

All in all a nice experience.

Have played in Novermber 2013. Fairways were in poor condition. Constantly sand or dirt on the ball! Fairways are very nicely laid out with lots of bunkers but the fairways!
The Caddy is absolutely not worth the money. I have played on my '77 Round 4 birdies. After that, the Caddy was 4 Coke. Does he not get it. So, one must not have!
Soleil and Ocean are better!

Right next to the larger Golf du Soleil. Organization OK. Caddy mandatory: ours were not very helpful and rather disturbing. Too bad. Space is maintained OK. Within a week of golf to play again for a change. The grand-beautiful Golf de l'Océan is however preferable!

According to the reviews better than expected

Greens are fast and interesting. Fairways are mostly neglected.
We were lucky with Caddy (competence for game recommendation) and also for payment of 100 DH satisfied (we basically have not been paid). Organization of the course is deficient (golf pro with 7 students played 9 holes before us).

Fairways:
The fairways are not in a very good condition, usually needs to be better defined, as covered in stains. Greens ok, difficult to putt.

Caddy:
Actually, they are not worth their money. There is only a small part, really understand some of it. No markings or no ball cleaning ball, putting line is very superficial, constantly running around in the back, no striker teeth after the round. Valuables should not be on the round, know in your bag after the round very well. If you do not have to take, you could do without it. € 10.00 fee, in addition € 5.00 are normal, then it is still haggling.

Rude, arrogant and fraudulent end caddies. Flirt, better dredge shamelessly to women and want to significantly more money than announced. Would prefer even carried my bag as my caddy every time they rammed on the floor. Once and never again, it is better to prove other golf clubs in Agadir.

Great course, but the hiring of caddies is mandatory, and my husband's caddy has stolen my husband's digital camera out of the bag during the round!

Been to Golf Club Les Dunes? Share your experiences! 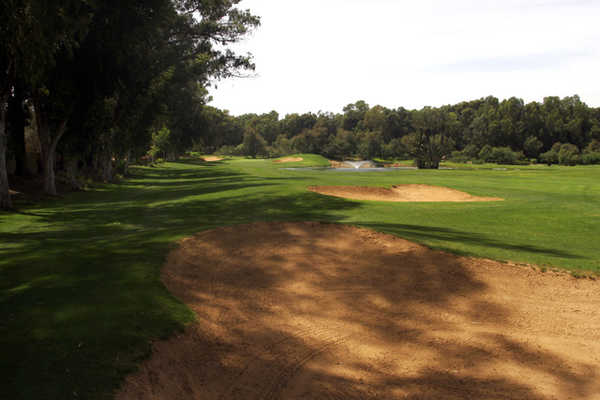