The golf course is a positive surprise in every respect: a friendly and flexible welcome, very well-tended lanes and greens, wonderful forest and hilly landscape. On top of that: wildflower decorations. Good gastronomy with a cozy terrace.
The only point of criticism: the signage could be better.

Dear Mr. Schiller, thank you very much for your positive feedback! We are very pleased that you had a great day of golf in our golf club. We look forward to seeing you again soon at the Landshut Golf… More

Dear Mr. Schiller, thank you very much for your positive feedback! We are very pleased that you had a great day of golf in our golf club. We look forward to seeing you again soon at the Landshut Golf Club.
We will renew the signage for the new golf season so that it will be easier for our guests to find the fairways and other facilities in the future.
Many greetings from Landshut, Marcel Kabirske

When you come to a new, unknown golf course and just at T1 the rain evaporates to make room for the sun, you can already speak of luck. But the positive impressions and laudable discoveries are actually much more numerous here at GC Landshut.
A really, very well organized and extremely friendly office. The manager took the time and even went outside with us to explain the location to us and we all received a logo ball, as if we were sorry, because we couldn't get into the range at the said time.
But now to the golf and the course. Well maintained and good to very good in all respects. Some blind shots and inclines, however, require a bit of rest and restraint on the ball. The lanes are varied and can be mastered well for athletic as well as older players (that was our flight) with a bit of stamina. You are welcome to return here, not least because of the very friendly and courteous gastronomy.
Sabi + Tom (GC Bad Orb)

Hello Sabi, hello Tom! Thank you very much for the positive feedback. We are very happy that you had a pleasant and relaxed day of golf in our golf club and that you could also enjoy our new club… More

Hello Sabi, hello Tom!
Thank you very much for the positive feedback. We are very happy that you had a pleasant and relaxed day of golf in our golf club and that you could also enjoy our new club catering. We would be very happy about another visit - but then with an open driving range.
Kind regards from Landshut,
Marcel Kabirske

A nice place with friendly people

We are traveling with the mobile home. From booking the start time by telephone to the service in the evening - only friendly people. The very well-kept place is a challenge for fitness on foot! Toilets, changing rooms and showers were spotlessly clean. The menu in the restaurant is straightforward. The food was good. The overnight stay in the camper van in the parking lot was problem-free.
A note on the course: There is still room for improvement when the signs “next tee”. Especially where the paths cross.
Still 5 stars

Dear guests, thank you very much for the positive feedback. We are very pleased that you were able to enjoy a nice and relaxing day of golf at the Landshut Golf Club. The signage on the square can… More

Dear guests, thank you very much for the positive feedback. We are very pleased that you were able to enjoy a nice and relaxing day of golf at the Landshut Golf Club.
The signage on the square can indeed be expanded, we will tackle this area in autumn so that there are no more difficulties for the new season.
We look forward to another visit.
Kind regards, Marcel Kabirske

A great day on a top course! Reception friendly and open, perfect tees (some places would like to have such greens), fairways of the finest and great greens; the course is challenging (hilly, rough, bunker, water, ... a little bit of everything); I think it's great that the rough left and right delimits the fairway (puts the fairway “well in the limelight”), challenging for the score, but that's the way it should be. Is idyllic and absolutely undisturbed by any noise... I'll be back!

I played the course 3 years ago. Back then I liked it - and now again! Very well-kept fairways, wide tracks. Heart, what do you want more?
A nice snack! Bavarian sausage salad at the Italian? Unfortunately a mistake. The terrace is still a stunner.
A successful golf day!!!

On the return journey from wonderful golf days in Kitzbühel my wife (HCP 12.5) and I (HCP 9.6) decided to enjoy one more day at the GC Landshut. We deliberately chose a club without discount promotions.
In the secretary we were greeted very friendly, quickly served and stood with the pre-ordered Cart at 9 o'clock at tea 1. For a Friday was already a lot of operation, but a group of four with 2 carts left us very nice same. At hole 6, we caught 4 women on foot, who made no move to let us play through. The slight trouble subsided when after tee 9 the tee 10 was free. However, there were now 4 men on foot in front of us, we had to wait and the 4 women suddenly came after us and cursed us. We should have asked if we were allowed to play through.
My wife wanted to apologize, but I pointed out that GC Landshut's score card also states that the faster flight is prerogative during the week. As punishment we had to play the second 9 behind the 4 men, who probably belonged to the women. The joy was gone!
Conclusion: After over 40 years of golf and playing in a few hundred places, I must probably start to write reviews, since etiquette becomes a foreign word.
The GC Landshut has a nice and well maintained place, also very nice ladies in the secretariat, but on the homepage should be: Guest players, especially if they hit the ball reasonably, are undesirable.

You should judge places according to their condition and not according to the persons who are traveling there as a member or green fee player. Granted, we underestimated the place, especially the "Front 9", which are very hilly and therefore rather belong to the category "mountain goat". The underestimation is due to the fact that the approach to the clubhouse on a few lanes of "Back 9" passes, all of which are rather flat. Especially on the very hot days of this summer 2018, my circulation often played a joke on me and the first time you had to find your way around a foreign place. Pre-sample is also no problem. I kept up to 6 well, the steep ascent of 7 drives me to the limit. So we (my wife and I) played a four-flight (with carts) on this tee. The following 8 is a short par 3, without playing problems. But the 7 still demanded tribute, at tee 8 I saw the ball twice and messed mercilessly. At that moment, the next flight came from the green of the 7 and I was kicked off, where we would come now, what we would do here now, etc. Speechless about so much impudence, I only hinted, let this flight through and then got the answer: That will You will not be much use, our "successors" are coming soon, this will be fun for you... We then pretty quickly behind these "friendly" players through the 8 and 9, the 9 down the hill gives each ball wings. The "subsequent flight" was not to be seen (so much for the truth of the statement). The summit was that the "nice" flight stopped after the 9 and boarded the clubhouse. Unfortunately, such contemporaries sometimes lose the fun of golfing.
But the place itself is well maintained, but was quite crowded on a Saturday. During the week gladly again, on the weekend probably not more.

I had the honor to play the VR Bank Tunier on the pitch. The place is in a very good condition for the weather conditions!! Green Tip Top and everything else was perfect!! All nice and friendly

Played by the local club in June 18 accompanied by a nice young man.
Very well-maintained course, which is surprisingly good in the face of the prevailing drought, especially the greens are excellent and extremely fast.
Varied tracks, with some wide fairways also challenging for long-hitter, some doglegs that demand precision rather than width. In places hilly, but good to go.
There are always on the square drinking water stations and after 4 a toilet, the combination of which is not noted as in many other clubs on the green fee trailer.
Afterwards I had a very good meal with the club Italian with a small but varied menu.
A place I did not play for the last time.

Greens and space maintenance are great

The golf course Landshut Oberlippach is in a great condition.
Very fast greens, top fairways.
A slightly hilly place which is very good to walk.
A place to play.

The Landshut Golf Club is located far away from any major civilization, which on the court no disturbing noise - is heard - not even from Munich Airport.

The place was for mid-March already in good condition. Here and there, the greens were a little bumpy.

He is fabulous with varied tracks and has excellent dining options.
Course maintenance could be better and Proshop something respectable.

A pearl with a wonderful topography

Absolute tranquility nestled in rolling hills with predominantly fair and wide fairways. Greens can sometimes miss the last perfection but you can enjoy this place both meditative and athletic.

Been to Golf Club Landshut e.V.? Share your experiences! 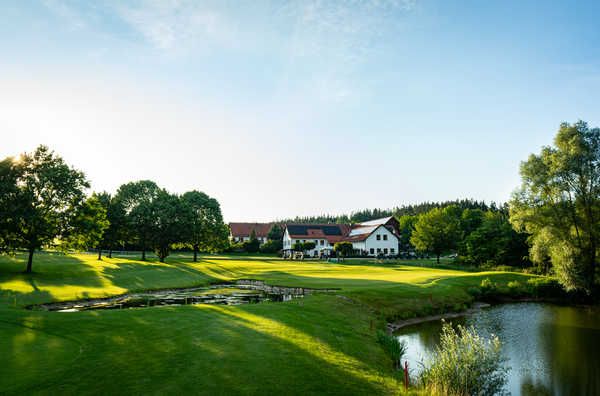