This course has a very quiet location. The views are wonderful. The holes are challenging, one has to be a long hitter to score. I counted three par 4's of more than 400m in hilly terrain. Very nice reception. I would defnitely want to play this course again.

The hilly course (cart for 18 holes quite recommendable) located in a quiet and nature far away from any freeway access, high above the town of Bad Pyrmont. Alone the journey gives an idea on what the golfer is getting into. The tracks are mostly open, but there are almost always skew or blind shots / discounts (some must rule according to Vorcaddy be played and there are always several bells to operate). There are virtually no water hazards. Higher HC should not have too much expectation in a good score. The first eight tracks seem almost a little monotonous. From the 9 it goes really wrong with the ascent and descent and the webs are much more varied. On the tracks 6 and 7 crossing according to an old big landmark in each case the border of the states North Rhine-Westphalia and Lower Saxony. On the back nine, then there is also some nice views of the surrounding villages. Throughout the round has repeatedly beautiful views of the surrounding mountain ranges. The condition was overall okay, even if one or the other fairway at certain points a fresh cut would have time to use. The theater's operations on a more or less almost dry and even slightly sunny late Monday afternoon was more than manageable, so probably the Secretariat in quite appealing small clubhouse was closed. The few members who I met greeted them. As a guest, you pay the appropriate green fee before or after the opening times of the Secretariat on practical green fee mailbox. A surcharge for guests without hologram one must not pay thankfully. VCG players pay 5 euro extra. With the Golffeecard you get way on weekdays 20% off the regular rate. From 17.00 clock, there are still a very reasonable Mondscheintarif. There is a driving range (below the parking lot behind Green 9) and other practice facilities. Who is on-site or off takes upon himself the here is a round or two is recommended.

Beautiful hilly course with magnificent views to Bad Pyrmont.
Definitely worth a detour.
Played on 06.16.2014

Zudieser early times a year (March 2014), the space not yet be in as good condition. The fairways were however already very playable. The greens, however, due to the stormy weather littered with broken branches and willow or birch kitten.
Safe and good putts were not possible on some greens. However, this was offset by a pre-season discount on green fee. The fairways are all varied. It goes uphill and downhill. From each range there is a magnificent panoramic view of the surrounding hills.

A friendly welcome at the club office, a pro shop with competent service and a beautiful club with restaurant in turn wonderful panoramic views complete the picture.
We felt at home here, come back and this place will play in the summer - perhaps with good greens then also the 5th point in it.

The place invites by wide fairways, to whip out the driver, gets its difficulty but hanging by numerous paths that will be played intelligently and some blind shots. VERY good hole description of ladies' and men's haircuts with the most important distance (!) - Exemplary!
On many holes wide panoramic view of the surrounding mountain country and Pyrmont wonderful!
The rough side is generally not very high, so that unplazierte balls can usually be recovered and played. WE have hardly ever have to play out of a bunker, which can be luck or the result is that many shelters were not placed very decisive game. Many greens are elevates and want to be played clean, especially since often not huge. On 13/9/12 they were quite fresh sanded and not cut so that they were extremely slow to putt and bad, especially since the holes are apparently being bitten by a perforated plate and gladly impressed as "Vesuvius". After the first 9 was unclear why the place is rated so hard, that gave to the much more demanding second 9 pretty quickly. Very good clubhouse with good cuisine, friendly staff and very good washrooms.
The green fee prices are very reasonable and at least a week significantly lower than Elsewhere.
The access road is well-place-extremely poorly marked also by a new Unterführungsstrasse in without navi we would not have found the place. If that is improved and now still working on the greens next time there is 5 star!

The place enjoys a high altitude. Here the condition of a climber is helpful! Very hilly and many expect the golfer oblique position here. Should have a challenge for the experienced player, the "blind shot" the courage to.

Been to Golf-Club Bad Pyrmont e.V.? Share your experiences! 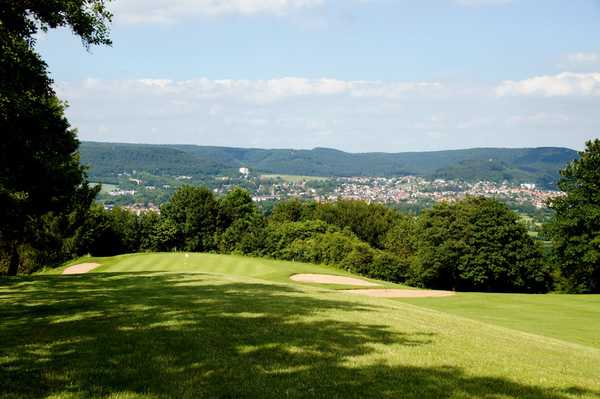