if you love golf, don't miss it!

very nice golf – closer to 5* than to 4*. for a decent green fee (compared with the high priced private courses in the vicinity) you get to play a real challenging and very nice kept old stile golf course.
on slightly hilly grounds you will face all the obstacles golfers should love. narrow fairways, good greens, well placed bunkers, excellent sand.
nice clubhouse, good facilities, friendly members to play with.
anytime again!

How to compare George and Fancort? To give tradition only 5 stars is too cheap for me, I compare layout, place maintenance and especially the greens and their condition, therefore for George 3 stars.

Old school parkland course with beautiful trees, nice fairways, especially the par 3s of 15 and 17 are nice, but course maintenance is better.
Greens not too fast and dull.

Do not knock over the clubhouse, but staff friendly.

... Royal Cape was founded in 1885 as a golf club in South Africa - by General Torrens - this club was only launched in 1906. Golf was played for the first time at almost the same time at both destinations, first on 3 holes which were later expanded.
All old golf courses here had sand greens in the beginning, including those that were oiled.
We played on a 9 holes course with such greens on our first trip to South Africa, it was a very dirty affair.

The South African Charles Molteno Murry planned this course - like Royal Cape and Colvalley - and has hardly been changed until the 90s.
All greens were newly built according to the current state, several in new positions - as well as some teas. The original layout was not touched. Phillip Basson - the former greenkeeper - did this job.

It is a very beautiful old golf course that exudes history, for these reasons it is now one of the easier to play courses.
The rest also speaks history and that's a good thing...
Such clubs would have to be listed, they reflect the beginnings of our beloved sport.
World class is part of it, the Hole 17 Par 3 185 meters is one of the best 500 holes in the world.

George has been one of the best in the country for years, currently even in the top 20.

Played on 12/15/2019 nice change at a fair price maintenance condition was good and we had a lot of fun despite the wind, rain and sun! Halfway very good if you are close to play

It doesn't always have to be world class

Played in early Dec. 19.
Of course Georg falls behind the other top places; especially 1-9.
But it is also a different price and the location of the place does not offer these splendid views.
But the back nine are great and I'm happy to have played this course.

After the challenges of pinnacle point and pezula, 9 holes relaxed for 500 rand in the afternoon

Place in good condition, the ProShop is well stocked, the clubhouse has the best times long behind.

Can you make hole 1-9 are more than fair

Price performance is unbeatable.
Great parkland course with many animals and in sensational care condition of the greens.

Unfortunately, we did not have such great weather that day. Wind and rain already bothered my game. In addition, there is no driving range here (typical South Africa). Nevertheless, I and my three teammates (Hcp. 4.9-10.2) also liked this course very well. He is just different from the other places in SA, an old parkland course. Nevertheless, he was well-groomed for the South African summer. For 40 € including trolley everything went well again. From the staff, to Halfway and a simple older clubhouse, all totally nostalgic (60/70 years). To my highlight holes counted on the second nine holes especially the holes 16-18. A place I would play again and again for the money. Alone because in the clubhouse no kappie may wear :-).

After we had played the Fancourt the day before, we visited the time-honored George on 08.01.19. In short: everything was fine and we can recommend the course at any time. A very nice course, parkland course, with old trees, with beautiful views of the nearby mountain ranges, many animals, especially springboks and monkeys, all of whom are not shy. The green fee was 500 rand, just a quarter of what is required in Fancourt. Good, but the Semirough was a bit unkempt and had some meadow character, but the greens and fairways were all in top condition. The halfway does not give much and after 17 o'clock there is nothing except drinks. The restaurant then closed, but that is also tolerable in the prices. All staff were very accommodating and friendly.

The oldest golf course in RSA

A fantastic parkland course for a sensational course. Can you play several times? Very friendly people.
Always my pleasure.

Beautiful old grown golf course. Very nice layout, no fairway like the other. Green fairways and slightly undulating greens. And the whole thing played for 460 Rand on 8.2.2018. A golf car is appropriate.

Fortunately, we did not let the negative comment keep us from playing the course. Super old parkland course, great condition, very well maintained, friendly, helpful staff. Who speaks of a disaster obviously has a problem. If you want to save the transport for your own rackets you have to go where you are best supplied, best resort on the Garden Route only 5 km away. Those who can not afford this drive 2 kilometers in the other direction. Public driving range with a few lanes to import. However, there are the tables blank, not even plastic tablecloths.

Place OK - the rest a disaster.

Were there today. Disappointing overall experience. 1. No, contrary to the information given here there is no driving range. But only a few square meters to pitch and putt. 2. The club is not old & honorable - just old. What applies to buildings, seats, waxed tablecloths and really all players. 3. Rental clubs: Does not work at all - ladies bag without putter and iron 5, men's bag mixed with ladies putter and women's PW. 4. But in the bar you are told by the maitre, the service only takes place, if you take off the cap... GOOD against: The place is OK and the white wine costs only 18 Rand. Tip: Club is hard to bear without white wine. Seriously, the store is a joke of old white men.

As previously reported by all colleagues, super. , Fairways maintained reception, no lack of water, super carpet, as did the divot hurt already. The greens in a very good condition, directional stability, as the putter pleased. represented abundant wildlife on the court, over Golfteetimes booked for 275 border with start time to 13:03. No range, therefore had enough time for putting. The starter has then released forward 45 min. Before. play allowed behind an internal tournament, thus we had to wait more often and were able to enjoy the square. No stress on the court, behind us was none and pressed. the player is incomprehensible to me still like a Halfwaypause of 10 min. to a hamburger with chips eat or the like. The häfte stops, which is understandable. It may not always be one of the totally overpriced top dogs.

Perfectly kept golf course in a beautiful location. Value for money unbeatable. Can are to buy easily. Very nice service. We would come immediately.

"Must have" on the Garden Route

In previous reviews is actually already said everything what distinguishes this place, so we would bear with further details only "coals to Newcastle". The friendliness at the reception, the course layout without the hassle of houses as in expensive resort golf as usual, varied fairways and all the "trappings" make the venerable George Golf Club to a top position. Value hard to beat. Keep it up, dear Georger, we'll be back!

Dear Herby, Thank you for taking the time to write the review and for the great feedback, it is appreciated. We are looking forward to your next visit. Sandra More

Thank you for taking the time to write the review and for the great feedback, it is appreciated.

We are looking forward to your next visit.

After we have repeatedly played the courses Fancourt, we wanted to play the old venerable municipal golf course in the middle of George. We were so excited that we played him the same day the same a second time. A fantastic variety of mature trees. Very varied holes. Very well maintained fairways. And for less than 25 €. Dear George Golf Club, will come again.

Super nice, relatively short space. to run without problems. Thanks to many trees there are plenty of shade. During our visit, the fairways and greens were in excellent condition. Here you can right the first time to achieve a good score. We saw deer and monkeys.
Dear spend here for little money for a relaxing day of golf on a more than 100-year-old golf course, as to fret in Pinnacle Point, Oubaai & Co. about his game.

Because of the town of George I, I would not come here, but the George Golf Club I would always like to play again. Very nice place. Parkland. Very well maintained, good caddies. A great golf experience.

A beautiful, old (founded in 1906) parkland course with wonderful trees. In warm weather, at least in one direction and a nice view of the mountains, in the other direction, however, rather uninteresting "environment".
More of a traditional "members' club" without elaborate Service (bat brushing, bringing Cart, ice fill, ...) as a typical "tourist resort".

A large pond in front of the clubhouse offers a beautiful sight, but is really only to lanes 1 and 17 in the game - otherwise no water hazards. Width, however, partly arg hanging fairways, which is particularly fair, but usually is not seen before the shock. If you do not somewhere off in the bushes or trees in the way are also quite simple to play - up to the greens. However, the are very different in speed, which may be due to the fierce Ondulierung. One should know on which side of the green one should not lie, otherwise the 3-putt is actually inevitable. Some bunkers, but they are also easy to play.

Good care of the balls - it monkeys cavort on the court (yes, true, no bag and clubs), ever pick up the now and then one or the other ball!

Conclusion: Due to the great tree population necessarily (re) play when you're in the area - is just 4 stars. (In the "Bear Golf Ranking": 7 out of 10 points).

Dear Berlin Golf Bear Thank you for taking the time to review our beautiful golf course. Hope to have you back with us in the near future. Regards More

Thank you for taking the time to review our beautiful golf course. Hope to have you back with us in the near future.

The George Golf Club is a real "old-school" highlight stands out against the usual, very pretty but also uniforms Golf Estates from. One could almost say: For purists. The course is laid out with mature trees varied and offers something for all Spielstaerken. To my two rounds (Dec 2012) the plant was in excellent condition.

Clubhouse and restaurant are simple and provide everything you may expect. 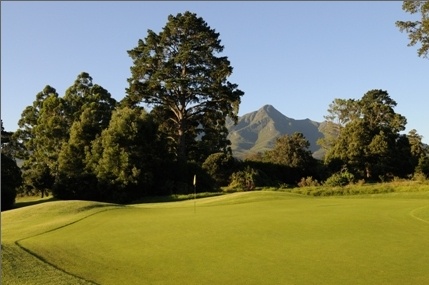