Fairplay is a hidden jewel to discover

We played Fairplay for the first time in Nov/2017. Among all the courses we play for a week at the Costa de la Luz, this was definitely the best from all of them.
We definitely like the warm welcome at the Pro Shop. GF Prices were definitely OK with the Golfhaftet card. We had a manual trolley without a fee. Driving Range is a bit far, but we could use a buggy to go there and back. Around 20 Driving Range Balls for one Euro.
The course itself was very nice to play, with interesting holes and beautiful landscape. The fairways and the greens were well kept.
This course is definitely a must to play if you are in the Sancti Petri area. The course needs to be better promoted. They have just renewed the hotel, which seems to be quite cozy.
I look forward for my next trip there and enjoy Fairplay. I hope until then the club remains as we have experienced last week.

For December / January the golf course is in great condition. Challenging lengths and fast, well-kept undulated greens make the game interesting every day. The wind, which blows from different directions, always presents the game with new challenges.
We enjoyed it very much and will definitely be back.

I played the course 4 times in one tournament week. He inspired me from the beginning. A great design, very scenic, varied and not easy, but honest to play. The condition is excellent with fast not easy to play greens. Despite easy differences in height to run very well. The only problem was the strong wind that made playing a challenge this week.
Loch 19 very nice with a view of the 1.9 and also 18. Extremely friendly staff and delicious food. The hotel area was very nice. For me one of the most beautiful places I have played and generally known in Andalusia. I would love to return, the place would not be that far off and the surroundings would be a bit out of the way of golf.

We played to seventh as part of a golf week on the Costa de la Luz. Fair play was a real surprise. The place is of the layout and the condition of care at a high level. The landscape is gorgeous and the place is nicely integrated into the trees. The greens were in the best condition of all 6 places of our week! Please do not be irritated by the slightly bizarre approach... the friendliness of the team in the club and in the restaurant was also a blessing. Fair play is an absolute recommendation...

Successful golf vacation with the pro

I was first a guest at the hotel and have played the course several times. A very good facilities in the hotel, friendly and helpful staff, delicious food in the offer of the buffet and in the restaurant, with which I was very satisfied. The course looks easier on the plan than it actually plays. The terrain elevation differences always present new interesting challenges. Due to the weather, there were slight disturbances due to rain. I will come back.

After the resort was closed for almost 4 years, it was fun to play it again. Extremely friendly and courteous staff, both in the hotel and in the golf club. Nice layout as ever, good condition of the fairways, a bit dull greens, possibly because of the season. Smooth 4 stars, maybe even 4.5.

One of the most beautiful places

On the Costa de la Luz, lies the design between Montenmedio and Arcos Garden.

Lush green fairways, good if synonymous rather slow greens in which not necessarily every high ball played immediately.

Extremely friendly staff at the front desk to get to the slightly removed driving range I got a buggy.
Range and putting green okay, the chip area was not open yet, as it was not fully grown yet.

Golf vacation leaves nothing to be desired

Dreamlike golf course with the friendliest and most flexible staff we have ever experienced. Super well maintained, sophisticated but fair complex, which we could enjoy every day without pressure from behind. The prospect of playing a dream that makes bad playing quickly forgotten. The hotel area deserves absolutely 5 stars, everything was very clean, well maintained with extremely friendly staff. The spa area impresses with its special architecture and tranquility. In November 2017, we were the kitchen of the finest cooked and special requests were always implemented immediately. We will definitely come back and enjoy the Fairplay Golf Hotel.

We played this place as external guests on 16 November 2013, the last opening day of the hotels and the system.
2 green fees including buggy and drinks for the price of 99 € are a gift for this plant.
Extremely friendly and helpful staff, German and English speaking, guided us from the parking to the tee.
Very nice place (except some deductions) and exciting terrain.
We were the only players on that day and it was a pure delight.
Definitely recommended!

We were there in September. Unfortunately, only the back nine to play, since the front was renovated due to heavy fungus on the greens. Entsrechend saw the greens from also. But it was still OK, especially since we were almost alone there and they gave us neatly discount... Insofar Fair!
The relatively flat course is not quite as easy to find but playing quite well. Among the many olive trees are found in contrast to the Costa del Sol also proper lawn to the relatively wide fairways and not the oily herb that grows elsewhere on the fairways.
The view is nice because the place is located on a mountain top.
All in all, totally OK!

Noble meadow outside the coastal towns

The facility is located, if you come directly from the coast at the entrance to Benalup a few kilometers from the coast. Improved signs to clubhouse would be desirable, and the entrance to the club grounds is not necessarily assume that there is then but a very nice facility on the golfer waits. But that's about the only criticism. If you have the Clubhouse / hotel found, you can park for free in the shaded parking with access to Hotel-/Golfrezeption. There you will be greeted warmly. We played here in July 2013 during the week without an appointment later in the afternoon. We could start playing immediately after payment of green fees very reasonable € 99 for two people including buggy and two bottles of water. The season was extremely manageable and we enjoyed the round in peace. The course is entitled! The very first discount offers right bounds areas and left a large water obstacle. So it goes on and the golfer is required again. High HC should take enough balls. And look in the bushes after the ball is to be treated with caution, since some creatures (including snakes) are traveling. The place was very well maintained and lush green. Like almost all plants in the region you have to adjust something on the hard "sand" in the bunkers. The club house / hotel is relatively new and offers everything a golfer could need (sanitary facilities) on the latest stand There is a beautiful terrace overlooking the golf course and the greens 9 + 18, where you probably can eat, we have however, not made. Again, one wonders how the whole game will be financed at the low operating / few guests and manageable Grennfee and how long this will go well. So, who takes upon himself the slightly longer way above in the context of exploring the hinterland to play a round of golf, you should make a stop here.

Ladies and gentlemen, we were on the 3.1012,1 week in the hotel in the golf course Benalup.
We were very disappointed with the hotel far from the truth of Leading Hotels 3 * at best, the data in the travel brochure have not been observed because of different restaurants. There was only one restaurant open in the exchange of 2 and 1 Asian. The 3 course meal there consisted of a meager appetizer and a choice of 4 main courses such Composed of a Suppenschöpfel wok in various options (a choice of): 1x with beef, chicken with 1x, 1x Vegetarian and even extremely sharp. The ingredients otherwise always the same, no salad for main course only a bowl of rice. The dessert menu was the week in both places the same, the dessert ansich a laughing stock. There was neither sushi nor was cooked right in front of the guests. The food was a disgrace of upscale Gastromie because it was worse than in a canteen. We had to eat in shifts, was forgotten in the morning to reserve a table, it looked bad in the evening, rather than 21 clock and then we had to wait until the table was free again. There was not even a little Spanish. If you wanted to look up, this had to be paid additionally. The breakfast buffet was refilled sparse, although always around 8.30 were at breakfast. The chairs at the pool totally outdated partly broken, the towels with holes, mold in the shower, terrace completely filthy.
The trolleys had to be paid additionally and were in a poor state.
A complaint in the travel agency was still in the sand.
The best place in the category "choppy and learned more." Too bad for so much money, a vile one as to spoil the holiday.
Regards
Ingrid Bradl

4 years ago space and hotel excellent. Now, September 2012, place only in poor state, the Finest All Inclusive hotel has lost the "Finest". What a shame for this great system itself. During our stay almost exclusively English and Dutch large groups. Also the all inclusive is limited because you have to pay extra for each request (eg cheese after eating). Of personnel has been saved as a result powerful economic problems that currently has this facility. It is hoped that the problems can be resolved to bring this plant back to your former level.

Benalup is beautifully situated in the hinterland of the Costa de la luz! traumhftes luxury hotel with all inclusive service. The golf course has quite good tracks and is an expensive playing golf!

The place is beautifully located on a hill, where the wind is blowing pretty.
The second 9 is better than the first. The greens are good and new.

If one is not on the fairway but a little off in the semi rough it is almost hopeless to find the ball.
The rough is grown too high.

You have to park next to the hotel or in the garage.

Very nice facility with even accept all requests. Prices. Located on a hill with beautiful views but also wind. worth to go there and play.

A very nice, not easy to play system. In mid-March this year, despite heavy rains in surprisingly good condition. Very friendly staff and an attached restaurant with excellent service at an excellent price-performance ratio.

Also for a longer stay this place is not boring. On a trip to the nearby you should plan a trip here.

've Played several times in recent years this place. The course is challenging, visually tw. very nice, onduliertes terrain, no houses along the way which is not found in Spain often. Fairly good course maintenance, never crowded, very pleasant restaurant with excellent degree includiert snack and breakfast, an all around good and reasonably priced considering the quality on offer recommendation for a day. 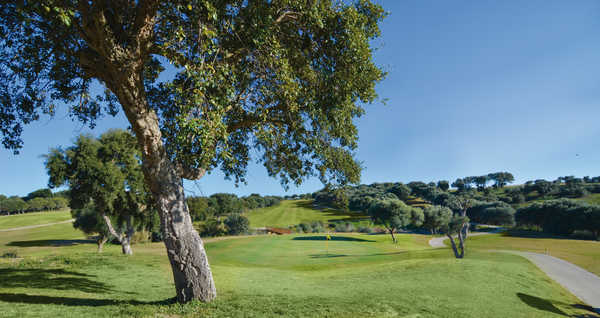