Since my last visit, the Course is much better. Good Work. Greens are perfect and very dificult! i´m waitting the summer to visit again!

I keep going back

I go on a golfing break every year (the last 10 years) in the spring with some mates, have played lots of courses in the Costa Blanca / Murcia area, Bonalba is the only course we go to every trip.
Well laid out course that doesnt destroy you, friendly staff, often as not a trolly dolly! good views We (the group) always enjoy our day there.

Can you play but you do not

Played on 4.10.2019. The 18-hole course in a resort of the same name north of Alicante looks a bit dated from the clubhouse, which is also badly signposted. The course is rather open on most courses and holds little special challenges ready. There are a few elevated haircuts or water hazards. Most railways have no special memory. The condition was not optimal during our visit. The greens went just so, but were trampled in the early afternoon and had many pitch marks on. The haircuts apparently not mowed longer and full of divits. The bunkers contained little sand. We had a start time for the Sundowner at 3pm with Cart for 105 €, plus. 3 € "Tagesgastpauschale" booked. It starts in 8-minute intervals. The game mode was high and quite slow so we reached the 18th green just before dark. We had to ask the Marshall to propel the forward flights a bit for a quick game as the balls were flying around our ears from the flight behind us. In ProShop we were still friendly. When we wanted to pick up our cart at the caddymaster, we were angepflaumt in Spanish, we should report to the cashier. On my note that the cart is already paid and I unfortunately can not speak Spanish and the request to speak with me in English, I was as far as I could understand only sent to the ProShop again. The cart we received then 10 minutes before our tee time of a flight of just 18 came. The cart had GPS, but otherwise it was extremely slower than our opponents, but kept until 18. After the round we wanted to eat something in the restaurant, but everything was cleared away. Overall conclusion: You can not play, but you do not have to

We played an 18 hole round in July 2018-
The place is rather flat. The layout is not very varied. Water hazards do not bribe your look.

Conclusion: you can take if you are in the area.

Light and shade on this property

A wonderful day for playing golf. Our Flightpartner Frank - a very nice person who owns a holiday home at the facility - accompanied us and could give me some helpful hints to the respective playgrounds. That was also necessary, a Birdybook I had not bought me; Which would have been very useful. The playgrounds are very tricky. Water, a constant up and down and these bunkers, on this day I have probably left no one. It would certainly not have been so bad if the remaining sand in this bunker had not been hard concrete. One of the most important shadows on this day. In the clubhouse and in the ProShop everything was perfect, friendly and attentive. Unfortunately, the friendly lady in the ProShop told me that the driving range and the exercise ground would not be usable; It was also not clear where this exercise site was at all. Only two tee-off places in a net and a putting green were available. All in all, I would love to go back there. To the operator please fill the bunker with enough sand on ;-))) thanked.

Golf at its finest

We were in June 2016 for 3 weeks in Spain and have Font de Loop and Allende played golf. Thereafter, only the Bonalba place. Here we are then stuck and have only played there. The place is beautifully located and is applied very demanding. With plenty of water and many steep slopes it is a real challenge for flatland player. We have accepted the challenge and played fantastic rounds. The staff was always helpful and very friendly and accommodating. Even without previously we could play promptly tee times reserve always, the green fee with cart is very low in contrast to the courts to Benidorm. We will in any case come back to experience wonderful golf day.

Good place in the greater Alicante

I end November 2015 played here.
Secretarial staff are very nice and speak good English.
The greens were absolutely fine that Fairwasy also. The reductions would, however, be made once again. Place was fairly busy on all days, no start time, it is difficult. 55 Euro green fee going absolutely fine. I would stay here again.

Golf: While the front nine are still applied halfway generous and there are a few very nice holes around water hazards, the back nine are rather disappointing.

Place Condition: Poor. Rock hard bunker. Fairways in meager state. The haircuts - insbesonderen on the back nine - an impertinence.

Conclusion: A round in desolate surroundings. Between rows of houses and views of rock and daraufbefindlichen condominiums.

Have played the course on 30 May - very friendly lady at the reception, has given a 20% discount as some Buker were repaired. The course is varied and you can run it too. Price / performance is very good. Here I play again.

Beautifully landscaped space with interesting holes. Good greens.
Fairways and tees make a little unkempt. Also the environment with many finished, but not finished houses is not very attractive. Bonalba has certainly seen better days!

Been to Club de Golf Bonalba? Share your experiences! 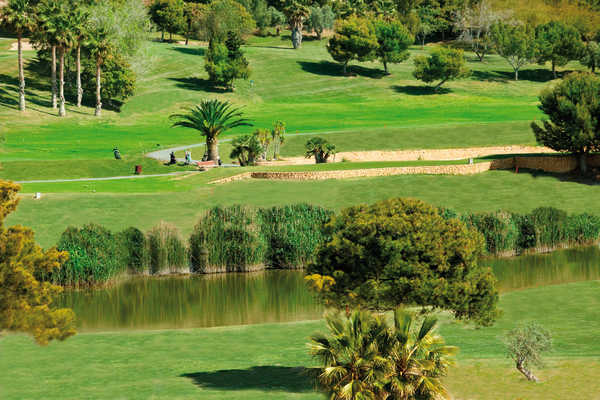