Played the mastercourse yesterday, course itself was in good condition.
I and my son rented the clubs from the club... Each set contained 7 clubs, and where charged 20€/ set. Caddiemaster selected the clubs for us, and result was that four of the clubs where junior- clubs, one of the club shaft was broken. In my opinion we where robbed with the club rental. I advice that You have Your own clubs with you when are going to play this course.

I (Hdc. 11) was at the Castanea Resort for 5 days at the end of June and played the championship course 7 times and the short course once.
I really liked the master's degree. Interesting, varied and fair courses. Good, if somewhat slow greens and very good maintenance.

The staff at the hotel and the golf club were very nice and accommodating. The training opportunities were also very good.
As a trainer, I can only recommend the Falk.
I will definitely be back, hopefully without any corona restrictions.

After a long rain only conditionally recommendable

Could play the place in the beginning of November in the rain and had to realize that the drainage on the fairways but in some places had great problems to record the precipitation. The sand bunkers were very often under water and on the fairways one stood now and again ankle deep in the "mud". Unfortunately, some greens, which were not very sprinting after a tournament and aeration, were quite overcrowded by the numerous ducks, geese and swans, so you had to "clear" your putt line first. Even so many teebox had to be cleared once by bird swarms to be able to tee off. As an animal lover, of course, you will gladly accept this. :-) There is nothing to complain about the layout and the course can be done well with a trolley. The water often comes into play and you should therefore take a few more balls. Unfortunately, there is no compressed air cleaner at the clubhouse, which has direct access. The clubs can be at least cleaned next to the D range. Gastro area has not been tested. The price-performance ratio was very good, if the greenfee was initially calculated incorrectly...

The golf courses are slightly hilly and the very good layout (with doglegs, bunkers, water, reeds and left grass in rough) makes the course very varied and exciting to play. The track descriptions on each tea box are great.
We found good fairways and good bunker sand. The greens were pretty good in the shot but compared to the other demands that the space demands, they are too easy to play.
The obstacles (mostly bunker and water) are very * common * placed, which makes the game quite challenging. You have to work hard for a good result. therefore very solid 4 stars.

what is missing for 5 stars:
- too simple greens
- no cleaning for caddy and rackets after the 18th hole.
- no roof for the golf bags in front of the proshop, it was raining right at the moment.
- the menu selection on the 19th for lunch was very modest.

In the most beautiful summer weather, the place presented very well maintained and very playable. The ever-present water is a painful (ball loss!) Experience for less savvy golfers.

Very well-kept, varied and interesting place, nice reception, both in the club house and in the connected hotel. We will be back.

Club and hotel. Plenty of parking.
E-Cars BEFORE hotel and clubhouse available. Rooms comfortable, bright, friendly. Beds very good. Reception friendly. Restaurant team / breakfast rich and also take special requests. Information about restaurants (allocation, characteristics, reservation possibilities) only conditionally available and can be found.
Highlight Tuesdays & Saturdays the singing Golf-Pro Frederic at the piano. In both areas an absolute professional. HPC reduction course for HCP 54 only conditionally possible for beginners. The Mastercourse is very limited on this topic. Gamesinselenkungen to each TN for lack of time only very conditionally present. Game change due to hints of the pros because of tight schedule difficult to implement.
9- Hole Course Oeffentlich Good playable. A little more care and a bit better signposting would be good.
Wellness- Very good. Staff 1a
Tipping tip ADENDORF -Da Enzo Sandstrasse Excellent

Thanks for your review. It is planned to rebuild our publiccourt with the aim of being able to carry out effective betting games. We hope to start the conversion later this year. The course is to be… More

Thanks for your review. It is planned to rebuild our publiccourt with the aim of being able to carry out effective betting games. We hope to start the conversion later this year. The course is to be used especially for beginners (also HCP-student) and for youth work.

Although we played at really hard weather conditions at 22/04/17 (strong wind and rain temporarily), the place simply is fun. Slightly hilly, many doglegs, a lot of water in the game, fair and challenging at the same time. The course architecture is simply succeeded!

The resort is beautiful and the staff friendly.

The clubhouse terrace is great, could possibly be visually jazzed up a bit (matter of taste).

Small drawback: for a resort and golf course of this quality should place toilets consist not only of construction sites toilets and these are "dressed" at least.

Thanks for rating. Two toilet houses are already planned and will be completed this year.

I also had to take the missing on both Coursen panels and place markers baffled to discover. Thanks to my GPS watch we went though. About the standard of maintenance I could detect as early in the season anything negative. Apart from the somewhat taciturn Counter, I found the staff to be friendly. The driving range is sufficiently large.

The plant makes a good impression. Certainly one could quibble a bit on the condition of the fairways and greens, but quite ok for dieJahreszeit.
It will definitely bring fun to play here and the restaurant is also i. O.'ll be back!

The 9-hole course is a great experience and highly recommended for beginners.

For handicap seminars not recommended

The golf Lehrter not go or too late for them concerns the golf students.
Language difficulties.
Nice staff in the Secretariat, so a star.

We were now already for the third time in Castanea Resort Adendorf, which is situated about 10Km from the wonderful town of Lüneburg.
The place can be as very flat, fine play and is still challenging but fair. The first nine holes are different from the second in terms of architecture, which makes the place thereby also varied. The course always made a clean impression, as does the associated hotel. Great rooms, great comfort, nice service, good food and nice wellness area. All in all highly recommended and the price-performance ratio fits and the entire ambience is quite appropriate. We will definitely be happy again, because we were not disappointed to date.
Greetings from Cassel

We (5 golfers) have billeted us for 3 days in Castanea Golf Resort and have a total of 4 rounds played on the Master Course.

Conclusion:
Resort:
Both rooms were in accordance with the 4 stars hotel. Very nicely decorated, very clean with a large bathroom. The bar and restaurant are decorated very stylish. The bar menu was OK +. The breakfast buffet was plentiful. Current newspapers were made. Wireless Internet access for free. Meals at the restaurant were all very tasty and of very good quality, which is why the prices are justified. The service in the restaurant was very decent (fast, courteous and anticipation).

Place:
Wonderfully nestled in the landscape. From the rather flat profile, if you lie on the fairway. The Rough consisting of loosely occupied heath grass was forgiving. Ie balls were always found and 95% were playable. From few marks. Great doglegs. Super Green Island (16). Greens were in good to excellent condition. Although we had played the course 4 times in a row, the place has not become boring.

We all really enjoyed the short golf trip. A reunion is highly probable. In any case, the system is highly recommended all round.

The quality and choice of food in the club house / could be more better.
And the greens could be a little better maintained.

Otherwise, everything is great, nice and diversified place, great exercise area (chipping, putt, range) including the indoor hall!
And price-performance ratio was right in all areas.

The place appears at first very shallow and clear, on closer inspection it turns out to be a real highlight, the difficulty that comes into play when par is the goal. True to the motto "Bogey is feasible but challenging par" Mr. Ross servant here has a lot of bottlenecks and difficulties for the built-in, which always likes to go the whole hog.
Worthwhile also one of the best and most beautiful places short, I know.
No complaints in terms of beautiful clubhouse terrace and the well-turned gastronomy and the very nice ladies at the front desk. Too bad that there was no Birdiebook in July2011 and odometer are still prohibited. Why is that? Need not be. Overall, a worthwhile goal.. 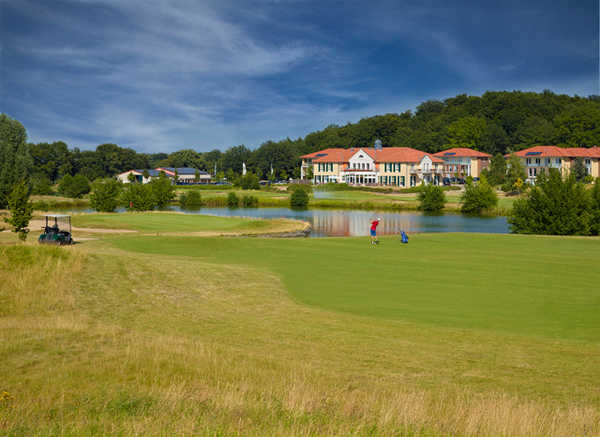