I have no idea how someone can come up with the idea to call this place well-kept. The tees are elephant backs. Fairway does not exist on the first nine. Yes, the landscape is very green, but you have no foresight. I would say the club has no money.

We played the course on June 29,2021 and were almost alone. The landscape is very beautiful and well maintained - both tees, fairways and greens. Staff and gastro very friendly - gladly again at any time!

Not overrun by tourists

On the way to Venice we have chosen this place. Very friendly reception. Our bitch was allowed to run along and the place was, except for the dried and little maintained tees, in very good condition. The greens were very good.
If you like the peace, you will not be disappointed.

In the simply held clubhouse we ate on the terrace only a cake (was very good) and a bit drunk. Again - the staff was very friendly.

Thanks a lot for your review!! See you next time!! Bye

We played the course in August, fairways and greens were in very good condition, the first three holes are par 5 (1 + 2) and par 4 (3) with relatively wide fairways, but after that many interesting paths come with doglegs and frontal or lateral water. On the 18, there are now a bridge, the staff is very friendly and the Spaghetti Ragu are highly recommended. Any time!

Thanks a lot for your kind review!! Bye

Unfortunately, played too early in the year

We played the course on 06 April 2015. Unfortunately, some weeks early - space is currently still in the "winter" state. The fairways still rough and little separated from the semi-rough / rough. The greens tidy but not airifiziert and cut, and so slowly. The court system is very nice though, with A LOT of water, ponds, hidden streams and watercourses, exciting doglegs that require a strategic game. We had a lot of wind. Also interesting are the deductions from the dam on the front 9 holes. An interesting place we like to play again, but rather something later in the year.
The manager was very friendly, the coffee in the restaurant good - one sits slightly elevated on the terrace overlooking the grounds.
4 star place with better condition!!

Thanks for your review, waiting to see you soon!! Bye

Not much visible water! But amusing

Played on 3 May 2014. Very friendly and courteous people. The place is located in the plains east of Bologna. The clubhouse looks like a typical small Italian factory. The place first appears simple. However, it is installed by a plurality pitfalls. In particular, the many part not visible crossing watercourses and are not to be underestimated pools require a tactical game. It is worthwhile to study the tablets well before each tee. Also the many doglegs making the rounds exciting. Sexy Teeoff are some greens in an elevated position, from a massive water dam down. On the 18th hole to take only the driver over the creek and let the bag stand on the side of the fairway. There is no other bridge back on the fairway to the green front. Overall, a delightful place that it deserves to be played especially since few people are there: on a Saturday almost alone on the court!
The Club Restaurant on the top floor of the "factory" is rather simplistic.

Thanks for your kind review, we appreciated it a lot. Bye More

Thanks for your kind review, we appreciated it a lot.
Bye 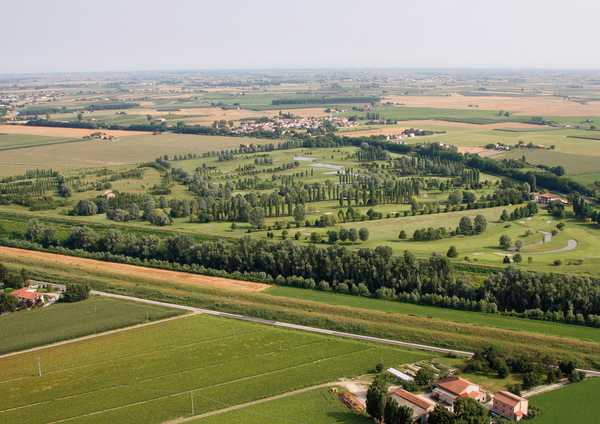