We play this course last week. Very friendly Staff welcomed us to the Club.
Fair Greenfee prices, however, 3 Euro for 20 Rangeballs and 4.50 Euro for a Manual Trolley which have had better days seems to not be reasonable prices for a non-resort club.
The course itself was in good shape, fairways could be greener. Bunkers with nice white powder sand. Greens in good condition, but you see lots of pitch marks which have not been repaired by previous players.
We played behind a big group of Italians driving buggies in quite strange behavior. Apparently they were playing a stroke tournament, since they wanted to play their ball until the end. This make our day a horror and the people behind us as well. They were many foursomes quitting. In some holes, even three foursomes waiting to hit. No signs of Marshall.
I will play the course again, but I will ask for a tee time without big groups in front of me.

There are very interesting holes with water that you have to play several times. Otherwise in the 02/19 super place condition, relatively many socios, which search a bit casually infinitely long their balls but otherwise are not bad. Always nice view of Jerez and surroundings. In good weather, the good restaurant is a recommendation. Despite not cheap price anytime again.

You can let the driver run wild, the layout is great and the care tadelos! All in all, a really nice golf course, the perfect fun!

We played the course on 3/29/2017 and enjoyed it very much! The place has been very attractive fit into the existing landscape! Each hole has its own character and is a challenge, so you have to fight for his score! The condition was extremely good!

A very nice interesting place, Cart recommended because of the sun and the hills, to ease the discomfort but very. Otherwise the place is applied very interesting, it would be for every hole and his challenge. Then left to end the day well on the terrace of the clubhouse with a Spanish snack and a cold beer.

Golf in the city of Sherry

The quite hilly 18-hole course (Cart recommended) located on the outskirts of Jerez next to the motorway Jerez-Sur (tracks 13 + 14 go along the highway / but does not interfere). The paths offer varied enough challenges for serious golfers, but can also be managed from the front tees good of higher HC. Because of the many water hazards, especially on the back nine enough balls should be taken. Of the higher haircuts, the course offers a good view of the city of Jerez, which unfortunately a bit of four building cranes started one, but apparently abandoned large-scale construction testifies. The condition in our game on 30.9.2015 of the fairways, tees and greens were in top order. Only the Bunker were almost unplayable, unfortunately with little sand, or very hard, not processed by Greenkeeping and characterized. Something unpleasant was the sight of some dead fish in the apparently low-oxygen water obstacle presence around the paths 14 to 16. The reception by the staff member in the beautiful clubhouse was very friendly. We had from Germany 14 clock via e-mail (online booking is indeed offered, but not working) reserve a tee time. The confirmation came promptly by a German manager who answered very nice also a few questions. We reserve probably due to the later start time Sondergrennfee from only 35 € per person paid what is really cheap for the region and good location status. The season was to our time more manageable but took the late afternoon again. A foursome Lord Flight, of which we have emerged as a pair of lane 9 read, play through us easily. We have joined the round with a visit to the city of Jerez and can highly recommend a round at this facility.

This is the golf course truly.

The first 9 plays on you, around and down a mountain.
The second nine are quite often flanked by water hazards.

In some places extremely wet and other totally dry.

Unfortunately, you can not use the buggy ride to the parking lot so that one is forced to carry the heavy bags through the clubhouse.

Highly recommended and nothing for beginners!

One of the best courses in the area

Have played the square end of September, the very well-kept fairways and greens. Overall, very sophisticated, slightly hilly, but also to cope with a trolley. Area quiet, no huge and look at Jerez. Service in Cubhaus very simple, but is the place to Arcos Gardens and Montemedio the best in the area. Recommended.

I played the space on 08.03.2013, after days of rain it was very watered down, the service was now 5 times in the last few years there, in the restaurant is still miserable, in good weather, the place is an interesting challenge, suitable for beginners, as to play very tricky

I played the course in May 2012 as part of a round trip Andalucia. Beautiful clubhouse and pleasant dining.

The course was in very good condition and the holes offered a lot of variety. Pleasant was also a "double" start time for hole 1 and hole 10, which led to a nice break in the café.

Although in Andalucia this time of year actually was not a season, this place was surprisingly well attended and there was often a wait. Maybe mine is just as extreme but also noticed, because I was on the other places almost alone.

Had there on a hot Maiwochentag 60-euro should pay, and nothing was going on, to our question about a special Offer we have seen just amazed. Sitting still on the high horse but it will come. Drove again.

Very beautiful golf course, varied and interesting holes, ie every other hole is different. Recommended on this page. - Play On the other hand, however, a pity that Spanish flights do not know the etiquette and at least 4x the ball to 10m on the feet, such as on Saturday 12th March with start time at 14:00 clock.

Surprise in the Sherry country!

Not later than 3 Hole you think you are in Switzerland. So much hills and pine trees we have here not expecting. The site is visually well laid out, has some very sophisticated car, and is not a beginner course! Ordinary course maintenance with some slow greens. Very nice club house with simple but good restoration. The nearby motorway comes only once for the Megahooker into the game but do not bother otherwise. Consistently a recommendation for a nice day of golf. 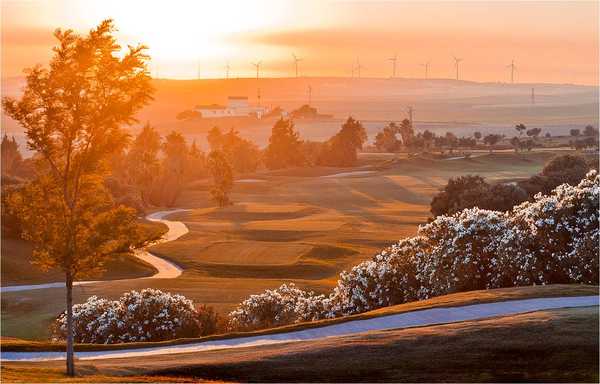