This golf course, which was built in Morocco in 1914, kept the natural and authentic Flair provided by its designers, Cotton & Pennink. It was renovated and modernised, but kept its original British spirit. The fascination starts already at the clubhouse from which you can watch the putting green, the practice, as well as the many pathways shadowed by pine, fir and eucalyptus trees. When you reach the green at number five, you can enjoy the wonderful view of the roofs of Tangier, the White City. 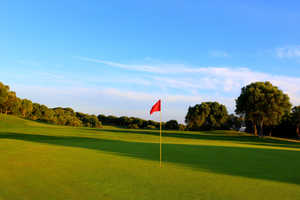 The administration did not want to accept credit cards, so I had to pay in cash. The rented clubsets were older. On the lap, we noticed that my putter's set was missing in my wife's set. I had been given a wood 3 instead of a driver. The holes are almost all quite long and narrow and would be a challenge to play. When we were there, the place was completely soaked, the balls did not roll. They did not roll on the greens either. The fairways were interspersed with different herbs. The growth was too long. Either you had to hit the ball out of the water or out of the herbs. I have played with caddies several times and know that it has very good ones. The Cadies here were average or just below. It was a rainy first quarter of 2018 in the Mediterranean. That may have contributed to his part. Nevertheless, the place made a rather unkempt impression on me.

For the first time with Caddy

A really interesting place. Some very nice holes. To meet the sometimes narrow fairways, sometimes a real challenge.
There is a mandatory caddy (Achtung. .. the caddies ever go their own way... bags are probably ransacked). For it is ubiquitous security personnel with dogs but not annoying.

Unfortunately, it had rained heavily the day before so the space in some places was a little soggy.

The round was really fun.

Been to Royal Country Club de Tanger? Share your experiences!

All Packages in Morocco