Corales:
The course has everything that is necessary in golf, which is why the PGA Tour plays here. Great course design, spectacular holes, excellent fairways, bunkers as large as ponds, huge, undulating and fast greens.
4 tee boxes for the men, whereby the third was enough for me. About 5,980 m at par 72 is okay.
The fairways by the sea are great, especially the nine, a par 3.

La Cana:
First of all, there are no more 27 holes because the 9-hole Tortuga course has been abandoned.
It is extremely long to the Hacienda course and can only be done by car.
The Arrecife course is the nicer one, especially hole 3 and the final holes 8 and 9 by the sea are perfect.
Fairways okay, greens good and fast, bunker a disaster as hard as concrete.
The condition of the only toilet on the square is an impertinence!

We played Corales two weeks before the PGA Tour. The place has everything for five stars. Punta Espada has even more spectacular holes, but he has earned the rating. For me he is worth every dollar.
La Cana, on the other hand, has earned just under 3 stars, as it is not in the same condition as Corales. Here, a maximum of half the green fee would be justified!

Next to The Lakes, La Cana offers the best golf for money on the 3 nine-hole rounds. Have played Arrecife-Tortuga and Hacienda-Arrecife. The former is played by almost everyone and is therefore full. Very nice holes, not only those that lead to the sea or lie on it. Through many tee-off options you can bring in even more variation. Hacienda is hardly played, so very relaxed with a handful of beautiful holes. Overall, always a great golfing experience, definitely play when you're in the east of the country.

Corales - expensive but again it must be

La Cana and Corales it is essential to evaluate separately. Note to editors: because the two systems have little in common, would also be a separation in 1golf. eu displayed.

The place is very expensive, but you should play him again. The price difference to La Cana is of course justified. The course is in excellent condition. No waste areas, all green. The fairways as gemalen, the greens immaculate. A grünse oasis overlooking the sea. The course plays to my Erachtes lighter than La Cana, probably because of the lack of waste areas. The ball is always played from the bunker or from the lawn.

Deduction is available for the clubhouse. There must be something else, for members only. Because that is what we have seen very small. The prices for very high. $ 6 for a small beer. And the Caddy was 20 dollar tip dissatisfied (10 are common practice).

A beautiful day in paradise

The complex offers golf at its finest. The design of PB Dye is not to be overlooked, and fits perfectly with the tropical surroundings. The course runs for mainly by palm trees and tropical forests, you get the sea on some fairways to see. Grooming is top, the greens are good, but fair, defended. We were there in late November and played alone. Very pleasant.

The clubhouse and practice facilities are also great. The star deduction is only due to the fact that I have even better like Teeth of the Dog and Punta Espada.

La Cana - too much advertising in German Golf magazines

In some German Golf newspapers are / were in lezten year, the golf courses in the cathedral. Republic courted excessive. The prices of $ 350, - aufwärtsch deterrent, but defied want to combine a holiday with the game on one of these places. Played (prices are incl. Private transfers from / to hotel) Have years ago the Teeth of the Dog and loved it. This time the cheapest option selected from 14:00 clock at La Cana. The place is well maintained, the greens extremely slow (long uncut) over the layout does not need to talk to. Some holes directly on the sea, run it directly to a real feast for the eyes. Negative points: per set of clubs were $ 50, - calculated without receipt for it lacked iron 7 + SW, PW with torn handle and wood / iron of different brands. Obviously ausschlißlich are material left. Complaint is not possible because no responsible person in place and already noted on the website wid that the Club is not responsible for rental clubs.
To make the advertising in the German Golf newspapers perfect, near the airfield, the airfield (Punta Cana, one of the busiest on the island) was not only silent, but not at all marked on the map. Receipt; on that day just 2 flights were all over the place! 1 small beer $ 8.96.

My most beautiful golf course - better than Teeth of the Dog

Played Corales, Cana, Dye Fore and Teeth of the Dog in February 2015. Corales is by far the most beautiful place, even more spectacular than Teeth of the Dog: beautiful holes right on the ocean, but also great holes away from the sea. A small club house with wonderful views over Loch 9 and 18 and the waves crash on the cliff

The place gave us so much that we played him twice during our holiday.
All 27 holes are great, even in the "inland". The condition of the place leaves much to be desired, a nice club house with pool by the sea invites after golf to relax.
Reduced green fee of $ 140.- from 14.30 clock makes the place even more attractive. Caddy mandatory.

It started with a big disappointment to my question, where in the clubhouse are the changing rooms, there were only uncomprehending shaking his head: there are no changing rooms, not to mention showers throughout, and in sweltering 30 degrees Celsius. Explanation: For green fee players this course is not scheduled to resort guests who play there, neither do they have so close to her hotel room.
The second disappointment was followed on foot: No sooner had I knocked off on the first hole appeared above the trees on a plane: How to Son Gual Mallorca is also the place immediately at the Punta Cana airport in the start or landing zone. In contrast to Son Gual flight operations is not as strong, so that keeps the noise pollution within limits, although each blasting machine makes already deafening noise.
If you want to take both of these constraints into account, and then experienced playing it a dream place in a great state care. That the holes on the Atlantic Ocean, located about a 10 to 15 m high cliff, in the truest sense are stunning, one can expect, however, that domestic-holes also come along great, a real surprise.
Rightly is this place, even if the limitations above are considered better than the place of worship "Teeth of the Dog" rated in Casa de Campo. 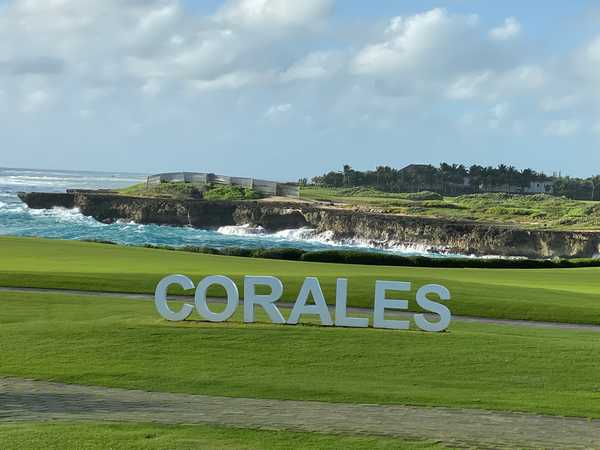