This is not a nice golf course

Short, tight place without any highlights. At hole 2 you have to look for the flag with the looker... and the 9, across the street, is also a pointless golf hole.
Resume: every pound green fee is one too many

Beautiful place, not only now

Were there yesterday for the second time after 2010, fantastic weather, have played and were a bit sour. Full Twilight green fee, no one says anything. And what can we expect? A construction site. The square is the degree rebuilt, sometimes no tea box, deduction from the fairway or white with red, an awful lot of GUR, new tee boxes elsewhere, Games direction markers have not been updated, no clues as to where it goes, greens laid on the fairway, par 4 and 5 in some par 3 and 4, etc.
Here comes despite the brilliant weather and the great location, no joy. Only the top greens (except those on the fairway) have convinced. The hotel is scheduled to open in 2018 again, probably the place is then again in a worthwhile state. Who wants to play a real top-ranked in the region, which was recommended Machrihanish Dunes.

One feels at the end of the world and finds a perfect links course, wonderfully maintained and very varied. Each hole is different, many strokes are blind. It is a place that demands an intelligent vorausschaundes and accurate play. Who skin just it, the ball will never see again.
The current infrastructure is non-existent, the hotel is closed, no cafe, not a restaurant, but it is perhaps because so wild and unique, in a vast marshland in the dunes. If you visit Islay to see the distillery, it is worthwhile to place a couple of times to play, it is never boring.
Kat 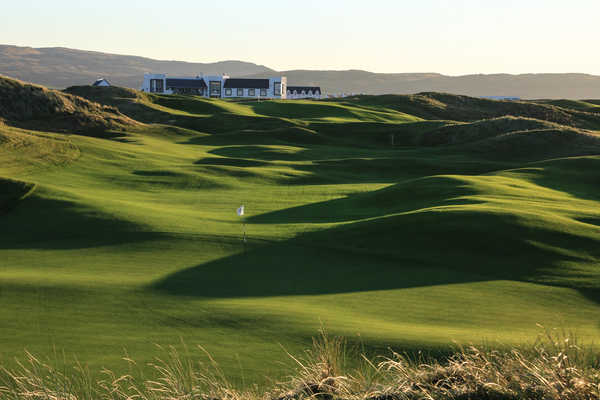