Great place in a beautiful landscape. Well maintained and for players with HCP 35 really Challenging. Staff are friendly courteous and helpful. Outside clubhouse Top interior would perhaps get the carpet and the bathroom facilities are renovated. Therefore, "only" good.

For this, the golf course is suitable.
However, you want to eat a little something, it is more difficult.
Who is not a fan of burgers and curry sausages, would be better somewhere else satisfy his hunger.
Short break from everyday ok. Who has the right to spend a fun-filled day, you should look for a more upscale alternative.

It is a normal country course how (unfortunate) him in Germany very often! Can you, but you do not!

Experience rich and full of surprises

For the golfers from Mr. GC Freudenstadt (Black Forest), the goal was called on 16 May 2013: Östringen-Tiefenbach. A journey that was worth it.
Even with streaky weather - at first with light rain - it was an experience, to make new tracks and obstacles of getting a picture and not always easy to develop the strategy. Few of the 14 golfers were able to meet their own expectations. Track 10 and 11 were tricky chunks and the 14 required over the gorge "full pipe". Sexy but also the final 18, the par 3, which is in the valley, and so dreamily into the wind and the driver would tolerate. But the first time it is always uncertain.
Certainly, however, the judgment is to gastronomy: creative, tasty, versatile - because everyone will find what he is looking for a final treat.

No country style, but pretty

The silly name of the club is deceptive: the members of the system and especially the very sober-functional clubhouse convey so not country-club atmosphere. It also is not a top rate of Baden, rather a pretty, not-too-long course, nestled in the rolling hills of Kraichgau. Really difficult, only the lightning fast greens. The first 9 holes have liked better than the second, since this can only be achieved through a painstaking, steep climb. The condition of the fairways can be, especially during dry periods, certainly improve.
Very nice the view from the terrace on the square. Unfortunately, the restaurant is not on the same level. The only really top notch coaching staff, headed by Warren Jacklin (son of the former U.S. Open champion Tony Jacklin), which can also be booked by members of other golf clubs is (hint!). Just because of this excellent coach, there are a total of (scarce) four stars.

Very friendly staff. 18-hole course in pristine condition. This applies also for the public. Short course. What else do not always encountered. Hilly course with beautiful views of the surroundings (vineyards, forests and fields). Prices are ok.

Been to Golf Resort HEITLINGER Tiefenbach e.V.? Share your experiences! 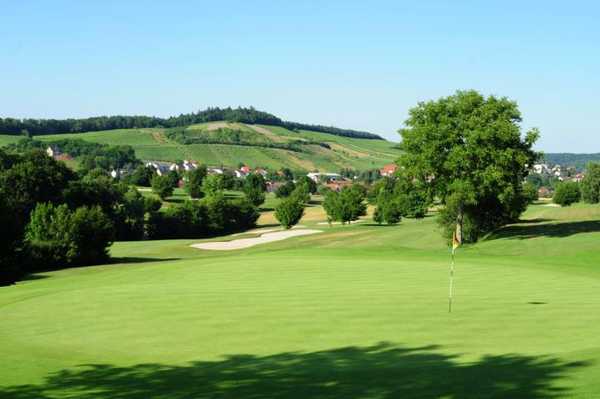