We had incredibly bad experiences with DCC (Durban Country Club).
It begins with trying to get a tee time. The phone is not answered, they respond to emails asking for tee times, but even after 20 mails vice versa, I did not get a tee time.
East London Golfclub arranged it finally for me.
I arrived with friends, we asked for our prebooked carts, which were no longer available. We booked 2 caddies then and finally achieved to get a cart as well.

There was no hospitality. We waited outside that somebody cares about us, but nobody showed up, no caddies, no caddiemaster... we had to go in and ask why they made us waiting.
When the caddies finally arrived, we missed our booked tee time and had to wait for one hour.
At hole 9 it started raining and my friend needed her jacket which she left at the pro shop. The caddies told us, that the pro shop is far away and difficult to find.
Then my friend asked her caddie to help her and he drove the cart to the shop and came back with her and her jacket.
As we started in between a mens tournament, this was the only way not to delay the tournament.
While we were playing hole 10, another cart came to us and a guy told our caddie that he is not allowed to join us any longer, he should come to the boss and would be punished.
That spoilt our game and after finishing hole 10, we decided to stop and clear the situation with the management.
The actual sales manger was that betold boss. He behaved towards the caddie as well towards us very rude, told us that caddies are not allowed to drive carts and that our caddie would be fired because he broke the rule. We kindly asked him to react a bit more flexible as the caddie was very polite and showed hospitality.
But the sales manager did neither accept the apologies of the caddie nor our arguments and finally throw us all out of his office and repeated that the caddie is immediately fired..
We could see and speak to more caddies which were frightend standing outside and told us, that they would be always treated very badly by that man, who still behaves to black people as more than 20 years before in the Apartheid regime.
We tried to clear the situation with the CEO of Durban Country Club.
She apologised and promised to clear the situation and let us know, but nothing happend.
Never again this course!!!

Fun and tight! The finish of the course is only 4 stars but the layout is close to 5. I guess it's always a lot wind there!

"We are very pleased that you enjoyed your round at our Beachwood Course. DCC is very proud of the layout of both our courses which are a credit to their designers. We loved your description of the… More

"We are very pleased that you enjoyed your round at our Beachwood Course. DCC is very proud of the layout of both our courses which are a credit to their designers. We loved your description of the course as fun and tight as this is precisely how Beachwood is meant to play, rewarding accurate golf and punishing wayward shots... A thinking persons course as opposed to some of the more modern courses that are biased towards length off the tee. Whereas you do get calm days in Durban, this close to the sea there is nearly always some wind and can be a real challenge when it really blows.

Glad you had a good experience, we are continuously striving to improve our visitor's experience of our facilities and feel free to contact us at golfopsmanager@dcclub. co.za if you have any questions or comments about the golf course or your experience at the club's facilities.

I know almost all the places along the coast from CT to the north of Durban. The Country Club is by far my favorite. Yes, you can hear the road on the first Loechern, the beach only a few meters away, you hardly see, but you will be compensated by great Loechern. Strongly undulating fairways, partially raised greens that are hard to read, a real treat for any good golfer! If you really enjoy the place, you should definitely entrust yourself to a caddy. Caddy is cheaper than a gree fairy at home during the week. Really appreciate this place only on the 2nd round.

The DCC has its best time long behind. Everything seems a bit stale.
The steep hills in the middle of some of the fairways take some getting used to and let the balls roll in unforeseen directions.
I remember the continuous sound from the main street on one side and the stadium on the other side.

Beachwood Course or Are the monkeys sugar

Great place, often very cramped and tricky, but very exciting and varied. Particularly on the back nine as much wind came into play that the strong ocean waves almost went down. Although the course offers only a few points from which you can enjoy sea views at the game, but the left-character is very strong experience. Who can explain the wind not as an enemy but as a friend, can look forward to many great shots.
All others should still have a few balls in reserve, the place is zielich greedy.

Unfortunately, clubhouse and everything around a bit in the year and the pro shop probably has seen better times, but a round is hiee a good recommendation.

The "Beachwood" Course is a nice parkland course, with many beautiful trees and bushes, from which you should keep out the balls at all costs. This is, however, particularly on the back nine is not easy, there are the tracks being evil narrow - for however not overly long (5.883m from the regular "club" teas).
Rear "Nine" is actually not quite admirably - please do not be fooled - there are first TEN tracks play before you're back at the clubhouse / the Halfway Hut and after mandatory in South Africa strengthening only EIGHT.
Despite "the beach" is the nearby sea to listen only, not to be seen. Water is more a few well-defended Par3s in the form of upstream ponds into play.
The greenside bunkers are used well defensively.

The greens are moderately slow, not really strong waved, but quite often provided with not very easy to read Breaks.

The condition is not perfect, but very tidy.

A cart is actually not required, but sometimes the way from the green to the next tee to find immediately. The signage is unfortunately excessively.

Kind are the many animals on the place - besides the obvious around Durban obligatory monkey bands and interesting birds (uA "Red Bishop", as we have learned), I was able to film a VERY large kitty cat, fortunately / unfortunately (?) in quite a great distance short auf's fairway trotted to but again to disappear in the bushes. The white tail tip after it should have been a leopard.
So - beware, do not be eaten! And: Please shoot any planes! The local Airport "Virginia" is located next to the golf course so the fairway of the 17 serves as entry lane and the cutting off is prohibited if an aircraft is in the approach. It acts, in fact, almost as if trying to land on the square of the pilot. Is very funny and luckily the traffic and the noise level quite low (about 5 small aircraft during our round).

Conclusion: A really nice place to be "take" should, if you are in the area. At least as long as it still exists - it was the end of 2016 rumors that this the "Durban Country Club" belonging place should be closed for any members lack. Knappe 4 stars. (In "Golf Ranking Bear": 7 out of 10 points.)

Beautiful and practical situated between the sea and the stadiums. Fair, well maintained place. Nice pro shop manager who lent me a great equipment and allowed the evening off even a little earlier. Have worn the bag, no problem as virtually flat. Gladly again.

The place was the entrance to a partly golf weighted (in addition to national parks and game drives) trip to South Africa. The place is nice and honest to play on the Indian Ocean where you get to see these as good as not (behind forest as the name suggests), good maintenance condition. Cute manager of a person responds, good food in HalfWayHouse, very good price / performance ratio!

An excellent "old" golf course with elevated tees and greens such. Miss Green punishable here. An absolute MUST if you are in Durban. A caddy is useful because the Puttlinien are not always easy to read. A TOP plant from A - Z. Only white socks are compulsory, but there are in the PRO store to buy. 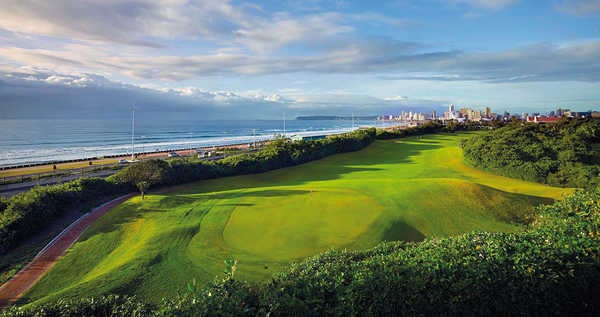