Gorgeous, much water and stinging

Your are sharing the grass and mangroves with subtropical birds, big iguanas, crocodiles and billions of mosquitos. Water is around you very often and sometimes more than land, some hits are nerve cracking. Very well maintained and kind service. Avoid the shades where the mosquitos go, I got stung at least 40 times. But I would go again, certainly the best public course I have played - very good value for money (65$ incl. cart on a weekday morning).

Yes, the green fees are not really cheap at this time of year - and that also applies to public places.
But if the service is right, starting with the front desk, the starter, who sent us two alone, as the potential players obviously wanted to play in pairs and disappeared again at the tee time for little boys... super nice service on the go and after Return!
The course has a great layout, the condition of the fairways is good, the greens are hard to read, but in a really good condition.
Well - and then again and again the view over the bay on Downtown Miami!
Conclusion: definitely play when you are in the area!

Every felt ball fan knows where that is. The huge pot (stadium) can be seen and over ten (hard sand and grass) places are right next to it.

The place is located in the middle of the forest of the headland, no houses disturb. We have never played a place in Florida where we saw so many different animals - fantastic.

Robert van Hagge is no stranger in Europe. He has built several courses - Golf des Bordes, Kempferhof, Le Golf National, Royal Mougins (F), Bogogno, St. Anna (I) - all very good places.
Here, too, he has created a great and hard place - originally built by Brue Devlin - which contains everything that makes golf exciting and difficult. The rating says almost everything!
Bruce Devlin - an Australian - also played on the USPGA Tour and recorded a two-digit score in Torry Pines (CA). He has sharpened the pencil for more than 150 places, including Fairmont St. Andrews.

The course is very demanding, interesting, challenging, exciting and very nice. Flat, marginal to neat undulating fairways and green change cheerfully. On several holes we had to stretch properly to get on the second on Green - even the wind tried to prevent this.

The greens are sometimes heavy - are difficult to read in low light conditions - but to play well. Here we had to work really hard.

The place is very well maintained, you can see that it is used intensively.

Not for nothing the Champions Tour has made several stops here. For us he is one of the best public around Miami.

A great clubhouse, very nice staff, everything you need.

We first played here in 2006. It is always busy on the lap, but it was still a lot of fun.

We played this beautiful place on 11.14.2016.
As a recommendation, the Twilight Rate at 14:00 we were offered.
Booked personally the day before in the pro shop. We were mitgeteit that on the matchday at this time a completely relaxed gaming is possible.
Said and done!
The Gameday turned out to be disaster. The start times interbred with starters of Tea 10. A normal flow of the game came into existence only from tea 10th

Not recommendable!!! Unorganized!!!
Typically Amis: (((
It's better to other places.

Did yesterday the first, but certainly not the last time Crandon Golf, Key Biscayne played one.

From the friendly reception from the competent briefing by Office and (female) Marshall through to catering cart was all great! Before and several start times were released deliberately because the NCAA held a competition of various uni's in Crandon. Here therefore proposes service, comfort and commercialism, hats off!

The course itself is hard, but fair - probably also "gas given" was for the college junior - musten what we atone with some three-putts

I have the place played 2012 Glen Steyres, a promoter of a racing series in Canada and I must say, he is still playing very good! I was there many years ago and have a PGA Senior Tour event seen!

Have played the course in April 2014 in a strong wind. This makes it not necessarily easier. And a challenge is the place per se plenty of water, some blind shots. Overall, a good layout. The condition was so-so. Not bad, but not as good as in many other places in the area. Many pitch marks. Overall, the place was very "soft". Just iron on the range allowed. Staff very friendly. For $ 75 on GolfNow it was OK.

Yesterday we have the Sundowner, played with a lot of wind, which makes the place even more difficult as he so already, through which many perfectly placed bunkers and lightning-fast greens. Perfectly organized, top care condition, just the smell of the mangrove is used to. As of 2:16 pm for 60 -

Have played the square end of November 2013. Great location, very challenging and entertaining. Had a caddy on the tour, which has paid off. Bottom line: you should have played.

This is not an average golf course

WE have this place recorded across in our Golf tour of Florida during our stay in Miami in January 2011 and already in Sekreatiat (with extremely friendly staff) were informed before the round "This is not an average golf course" and was thus We do not promise too much.

The course is located on the island of Key Biscayne next to the famous tennis court.
Plenty of water (salt water lagoons), palm trees, mangroves, great views (especially from the track 18) on the Miami skyline, beautiful fairways and greens. A dream.
The more wind - the more difficult to play.
Balls should not be looking in the bushes (especially near water) better, because lurking here - as usual in Florida - already now and again one or the other alligator. A ball better than losing a hand.

Carts are indeed included in the U.S. by default in the green fees. So here. The Cart is a kind of GPS navigation system (on-board computer), which has a hole by hole directs and provides many details of the hole. Customer service is generally not written large in the United States.

Golfing in the United States generally makes fun because the setting for golf's completely different than in Europe (and especially in Central Europe). Golf here is almost a "grassroots" and the most unsnobistische environment (including flight partner) makes just as much fun Europeans.

Been to Crandon Golf Key Biscayne? Share your experiences! 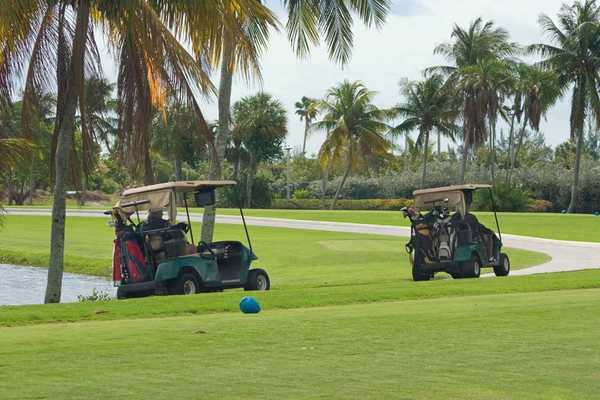