Playing at Bro Hof Slott has become a perfect yearly tradition. The course is magnificient both in terms of golfing experience and in spectacular views. The break at half way is an elegant and pleasant surprise. The greens and fairways are always in perfect condition and some holes, although very difficult, give e terrific sense of challenge. The club house is beautiful and the restaurant serves great food. The staff is showing high professionality The lockers rooms with very elegant and functional facilities with a nice sauna and bubble-pool complete the perfect golfing esperience and help to forget the lost balls in the lake.

We played the Stadium Course. The layout is great, plus the intense white bunker landscape. The birdie book should be read carefully. Especially with regard to the many existing plateau greens. They want to be played exactly, otherwise it ends in the "valley of sin".
Now to the little things that I don't really accept in a golf course for €190.
- shattered tees (you're constantly standing in huge divots, even on par 5 holes)
- discarded plastic bottles at the edge of the fairway
- Smelly waters due to the most violent formation of algae
- Greens with untouched pitch marks
I would accept all of these things on a €100 course.

The driveway to the club alone is in a class of its own: as if by magic, a huge wrought-iron gate opens up, revealing a beautiful castle that is also the clubhouse. I was ashamed that I only rented a VW Golf. A Bentley Cabriolet would certainly have been befitting. The championship course is in a class of its own and undoubtedly one of the most beautiful golf courses in the world with above-average sporting challenges. Even if the green fee is quite remarkable, the price-performance ratio is still outstanding. Anyone who is a golfer in Sweden and does not play this course can not be helped.

Bro Hof Slott Stadium is absolutely world class both in terms of condition and design!!! We do not even talk about the scenery of the castle and the landscape! The Lake Lakes in the lake are certainly the most spectacular in continental Europe ... !!! Bro Hof Stadium belongs to the absolute top worldwide! The fairy is very high, but still worth every penny...! In bright sunshine Bro Hof Slott Stadium was a unique experience ... !!!
The Castle Course is a Woodland - Inland Course that plays almost like a links course. Also this 18 hole course is a feast for the eyes and is also one of the best places in Sweden!
Best to take a car and book the 36hole offer, then the fairy will not hurt so much for Stadium!
As a halfway gabs different herring pots, a classic Midsummer Night's court!
Bro Hof Slott is a hard-to-describe, unique experience for every golfer!!!
We were excited ... !!!

Wow! Spectacular and an absolute must for any golf friend. I played on a weekend both the Castle, and the Stadium Course. In both places, the greens were brutally fast (estimated 11 on the stimp), strongly waved and the track most loyal I've ever played. Fairways and tee boxes are exactly like the bunker, the Halfway House, Club House, the range and practice greens in perfect condition. More can not get offered it.

The slightly shorter course, which repeatedly back and forth-changed in style to between Parkland and Links Course. Highlights for me were the holes 4,5,6 and 7, and 17. Right now in the autumn, a very beautiful course, because of the tree population and the layout. Compared to the Stadium course much less water, slightly narrower and much more like a parkland course.

Just class. One repeatedly has beautiful views of nature and especially on the adjacent lake. But even some holes with great trees. I have never been so many pictures during a round. Just beautiful. The absolute highlights for me: 3.9 (!!!), 13, and 15 (!!!), 16 and 17 (island green as TPC Sawgrass). Definitely and by far the best course I have ever played.

Well of course you have one more thing in such a golfing experience to incorporate, and that's the price. The green fee prices were increased massively in the summer: 18 hole Castle about 160 EUR and 18 hole stage about 260 EUR. Who wants to play both courses (does not have to be on the same day) is charged in the offer about 300 EUR. This is of course a lot of money. Personally, I have to say that the Stadium Course for this money really worth. Breathtaking and one gets an enormous achievement for a lot of money, still makes a decent price-performance ratio. The Castle Course is too expensive in comparison and I would not he play again for this green fee. But he was not spectacular enough, and other courses in the area (Royal Drottningholm Kungsängen Kings Course) are similarly good but much cheaper.

Who in Stockholm, Golf loves and a European Tour course wants to play world class, just have her come here and play the Stadium Course. An absolute dream! I will definitely play the course again! For me, more than 6 5 Stars.

What do you expect for yourself sk 1.690.-? due to the anthemic vorbeschreibungen my expectations were eventually set a bit too high.
The place: great view from the 1st tee. t boxes were in good condition. fairways throughout almost like the greens mowed, but slightly soft; This was but the fact that it has before it rained quite a lot. the fairways were overused but that day quite... countless not repaired divots. The greens are fast and tw difficult to play.
As you walk in a round often comes by the HalfWayHouse, it is not possible that you can keep a rhythm game. downtimes are therefore guaranteed!
Badly placed or missing instructions to the next hole are also not playing perfect for a brisk. It is therefore to be expected with a relatively long Time.
That the staff was friendly, you do not have to actually mention for Sweden. all in all a nice day of golf. but nothing more. there are in Sweden also interesting golf courses, which are much cheaper.

One of the best courses in Europe!

Bro Hof Slott had long been on our travel list and has fulfilled all what we expected. Even the journey to the castle is impressive, the reception not only friendly, but very warm. On the 1 of stage courses then a breathtaking panoramic view. The tees, fairways and greens on the highest level. The course is long and challenging (we play Hdc. 10) but always fair. At Halfway, you will pass 4x and again the quality of food and service is top (even if the vaunted house specialty, waffle with cream cheese, onions and fries not quite convinced). The place is incredibly soulful embedded in the landscape, and each hole has a great look. We had the Castle Course to see the possibility, and to play a few extra holes, very different style but it is the case top. We will come back and play both again!

Could not be better

I found this place first played in June, in bright sunshine. What can I say: just all around perfect. Super friendly staff, two sensational golf courses, fantastic food and very friendly and open-minded members. The Stadium Course is very long with many water hazards, but any time to play fair, because everything is clearly visible. The Castle Course is much easier to play, but also very, very beautiful. Both courses are structured so that multiple passes to one of the two Halfwayhäuser respectively. The snacks are highly recommended.

I liked the place so much, that I am now high just flown in September again. The weather was on the first day so stormy that we were the only ones on the course and it has partially blown us the balls off the tee. Since the Halfwayhaus was not open, extra 2 staff came with the cart with virtually the full range moved out to us so that we were catered for... sensational service.

If you book in advance and get paid a very good package offer for both courses. I'm looking forward to the next round... because the next flight for October is already booked.

Anyone who has the opportunity should play this course! Just the atmosphere when you boot up to the castle's worth it. Then the view of the courts, the great organization and planning in the pro shop, but above all the friendliness of the staff simply can not be beat!
For such a high-priced place this classy atmosphere and a real feel-good bonus!
We spot a green fee package booked for both courses, which significantly saves money. If you feel like you should have time to test a buggy with GPS, touch screen, and influence on the accelerator a real experience.
There are actually only place to say: A DREAM! The fairways are like our greens, so I initially had fears of contact... the greens are unbeatable and extremely fast and ondoliert. Absolutely worth a visit! It was an unforgettable experience, both places!

If there were more than 5 stars, this place, rsp. the whole system with all the staff deserve it. The Stadium Course is simply sensational. Very demanding, long and with many obstacles.

But, and this is the most important thing, all pitfalls are visible, nothing hidden and nothing nasty. The fairways in great condition and the Grenns although sometimes very undulating track but very loyal.

We played in various countries, but this was the icing on the cake absolte in our time golfers.

Dre is a MUST in this aregion and absolutely rightly among the top 100 in the world.

What else can I say. This place is among the top 100 in the world and the No. 1 in Sweden Incredibly long. In some cars it has left and right respectively of water. Therefore, an HCP is recommended by 24th Difficult to play, but incredibly beautiful. The embedding in the countryside is managed. Terrific place!

Been to Bro Hof Slott Golf Club? Share your experiences! 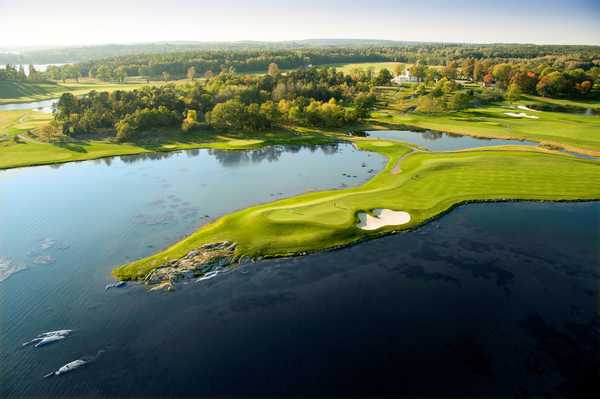