Played on 12. and 16.3.2018. The slightly hilly 18-hole course is located within the resort of the same name. At the entrance you have to sign up shortly and you get the way to the clubhouse described. In the small pro shop you will receive a friendly and pays the green fee. After 12 clock it is cheaper and cheaper from 16 clock. Who is a tourist should ask for the 20% discount. We paid as non-hotel guests "only" 80 US $ per person incl. Cart. The cart we exchanged in our first round after 9 holes in the nice starter, since our barely made the gradients between the tees. The cart is obligatory and also useful. A driving range is available, but very rudimentary. The course has its challenges and is very varied. There are some water hazards, many bunkers, doglegs and high rough. Even one or the other blind blow, also from the tee, is absolutely necessary. The fairways are usually wide enough, so that even with the most prevalent wind a little scattering is fine. As a precaution, you should take a few more balls with you. The Signal Hole is certainly the No. 6 where it goes with a neat drive over the sea on the lower green (Hit and Hope and have fun). The condition was generally okay. The first green had shocked us a little bit from the state, but it got better and better. The greens were usually fast and loyal. Some tracks have been newly created and beautifully designed with Arizona-style cacti. At some holes you play on the Caribbean Sea, which is of course always nice. Apparently, however, probably one of the most beautiful paths, the 18 ran probably times at sea, made flat and now leads from the parking lot from the beach restaurant back to the clubhouse. Between lanes 1 and 18 is a large pond where some flamingos, pelicans and cormorants have settled, which is a great photo opportunity. Especially on the green of the 9 and tee 10 feel some adult iguanas very well, which is also an interesting encounter with nature on Curacao. You play constantly along some holiday homes / villas and it is also built here and there, with the corresponding sounds. But this occurs only occasionally and has not disturbed us. Much more disturbing we found the odor nuisance depending on the wind by the nearby oil refinery. We had a start time by e-mail for 1pm. The game mode was always very manageable. Basically, we have seen on the course at noon only a few Zweierflights, so there was always time for beautiful landscape photos during our rounds. I can recommend a round on this place.

Dear Mr. Reiner, Thank you for your review and sharing your golf experience with us on our Blue Bay Golf Course. With our Greenkeeping team we continue to keep our golf course in good shape. Hoping… More

Thank you for your review and sharing your golf experience with us on our Blue Bay Golf Course.
With our Greenkeeping team we continue to keep our golf course in good shape.

Hoping to see you next time in person so I can thank you personally!

Typical Resort Course in Curacao. The place is located in the Resort Blue Bay near Willemstad. Currently the place is obviously rebuilt, we saw 2 new tracks. Some tracks on the seafront are beautifully landscaped! Unfortunately, the current 17 will probably fall new rental homes for victims. The course itself was in fairly good condition, despite steady winds and temperatures! Greenkeeping was constantly at work. The bunker, according to the climate harsh.
The new clubhouse is small but service and offer okay. The ProShop only provides minimal offer. The green fee is caribbean high at $ 110th As Resort guest's 30% off.
We had rented a bungalow at the resort. Here the price-performance ratio was rather bad.
Our summary;
Golf Top
Bungalow flop

Bluebay Golf is within the Blue Bay resort complex (gated Communitiy) and is also open to external guests. The clubhouse is located next to the beautiful beach (and one should think well, after the round, another to spend bathing in the sea), and offers a small pro shop and a restaurant, as well as changing rooms and showers.
The place is relatively widely distributed, you have to take a cart so, but this is included in the price anyway. A small driving range (which since mid-January in the green fee - is included - including balls !!) shortly before 1 hole allows a hammering before the round.

The course (Par 72) has certainly its pitfalls, the so-called signature hole is the par 3 hole 5 with whipped across the ocean that attracts balls magically. From Mens Tee (white) between 170 and 195m, to the partly violent wind, is already times ne announcement.

The fairways are quite dry, so jump the balls sometimes more, the greens were our visit in relatively dry state (and even brown and bumpy in accordance with the drought - sanded one day sometimes completely). True directional stability can not expect any footprint Vorflights can be seen on the sandy bottom good one.

The bunkers are quite hard, clear in the wind to fine sand does not last long.

Keeping the score together is not always easy, but you can total well have fun here, mainly because the green fee is affordable. Hotel guests receive a 30% reduction, but there are also packages that are open to everyone (10 it cost card 560, - $ and is divisible)

The court should, however, be altered in the near future, be added to the clubhouse and newly created, then will that might impact on the green fee prices. Especially when you consider that the other resort is much more expensive (Santa Barbara in the south east of the island) (despite the largest packages to get there is not less than 100, - $ for a round of golf, the individual costs even less than 200, - $ for non-residents).

However, since the Blue Bay Place probably serves to make the surrounding land with houses more expensive (and heavy construction everywhere are under way) is going to change in the foreseeable future probably some. So the former 18th hole along the ocean will disappear, there are built houses, as well as the club house will be rebuilt as apartment house and erected elsewhere a new clubhouse. To be well-pending some changes in the next 2 years...

New Pro since February 2016 Roland incidentally January Schippers (former Holland and Abu Dhabi). He has already prices reduced slightly, as the range is now included a round of golf booked etc.
He also wants the Golfcommunitiy strengthen, matching guests closer, more German on the system have (so far there are just mainly Dutch). In addition, its goal is to reduce the cost of space of 1.5 to 1 million.

Another highlight at the ABC - Islands

Like almost all Caribbean places, unfortunately this also to the economy of water, still have to play this place due to its magnificent holes that are a challenge for all. The views of the Caribbean Sea are terrific and his style of play, the wind must be taken into account.

The clubhouse with its beach invites then to jump into the sea and under the palm trees, you can enjoy the rest of the day.

I've never played such a parched place. Even the balls are on the fairway versprungen depending on the surface times to the right and once to the other side.
Yes it is currently hot in here and the green fee (Green is hardly anything here) that cost only $ 80th The 18 has a beautiful view of the cliffs, but I've seen more often in the Caribbean. Conclusion the money you can spend else where.

The golf course is laid out wonderfully and spektaktulär, but very difficult to play, as much wind usually prevails. The fairways were brown and hard in general, we had a dry spell with water shortages. (February). The beautiful clubhouse are very nice people. Beautiful interressante fauna such as iguanas, rare birds and flamingos

Beautifully situated right on the sea space for a challenging game, tlws. with spectacular discounts.

The planting and observations in animal and bird forget little care deficiencies. 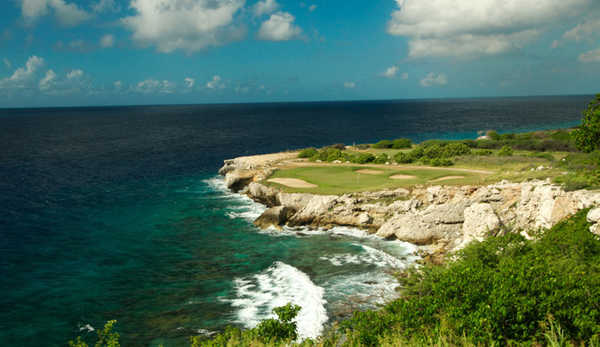