Staff exceedingly friendly and helpful and even though they have had no rain for several weeks the greens were good and the course challenging. We could definitely recommend it to all golfers.

After 1 hour and 25 minutes from Heringsdorf we played this golf course with four people by ferry. We had booked Teetime, but probably would not have been necessary. We were almost alone at 12:45 in the square.
The condition of the fairways was very good compared to Balmer See on Usedom, the greens in a great condition.
We walked the place in less than 4 hours. The Topogrphie is varied with the many water and quite demanding.
Absolutely recommended.

Beautifully designed golf course with partly quite demanding tracks. Unfortunately, it had rained days / weeks before, so the place was very wet. This was almost nothing going on, we had totally our peace and could play very relaxed. Still a worthwhile round. Senior Discount from 60 years, Cart is not necessary. Only 30 km behind the Polish border, a detour for a golf holiday from Ahlbeck / Heringsdorf is definitely worth it.

On a weekend holiday in Międzyzdroje, golf also had to be in the forefront! A beautiful place very nice service in the restaurant, great food, the area clean and well-kept. The place is ambitious, but very varied. Even a Marshall drove around and watched unobtrusively. On request, he kindly answered in English that he would see to the right, but with us everything would be ok! I found good! The clubhouse we found very nice, the carts were new, etc. All in all a nice day in great weather! Only the mosquitoes...

In July 2017 in fine weather. Played space from the lay -out highly interesting Wonderful nature and quiet clubhouse fits very well in the landscape and looks beautiful, unfortunately almost no guests Green fee 115 .-- for two incl e-cart Would be all loose for 4 * rich if not The terribly bad fairways! (Also because of greens you do not need to add)

A pity, a very beautifully laid out place, but at the time because of the condition of care only very limited playable. Fairways can not be said: Hard to believe, but they have only First Cut or Semi Rough character. Whoever loves it or is used to it, only from the Rough or Semi-Rough, is well cared for on the pitch Due to a change of ownership, the place has been maintained since the beginning of May 2017 with obsolete technology. In the bunkers more dirt than sand.
The beautiful clubhouse is currently not in operation (restaurant closed). We were with a group of 6 players in early May 2017 on the pitch, a disappointing experience. Despite repeated requests (we had learned by chance from the change of ownership), we were assured by the new owner that the place could be played well - a smooth purge.

We came from Usedom on a trip here. In Swinoujscie there are two ferries over the Swine, the Northern, recommended by the navigator and google maps is Mon to Fri only for locals! You have to take the sudumgehung! THe place receives with Super driveway to the magnificent clubhouse. IN the week Grenfee approx 35 euros we paid for 2 with Buggi (highly recommended) 89 €. In the first 9 Swampy terrain with extremely many Entwaesserungsgraeben, this hilly with great views. The second nine more heath landscape with forest and even higher hills. SUPER space condition. Hardly people, a real recommendation. Sichnnoch would be worth more if the very time-consuming ferry would be not. JAM schedule, or equal to dwell in Wollin everything is always cheaper.

If they ever they need to be near the island of Wolin play this unique inland-Woodland Course.
The place is very well kept and extremely varied with spectacular deep bunkers. Ideally placed in the landscape Westpommerische he is certainly one of the secrets in golf in Eastern Europe! The enormous clubhouse overlooks the entire system.
When I visited some North German guests were on site which also praised the plant in the highest terms. In any case, a four-star plus space!

Been to Amber Baltic Golf Club? Share your experiences! 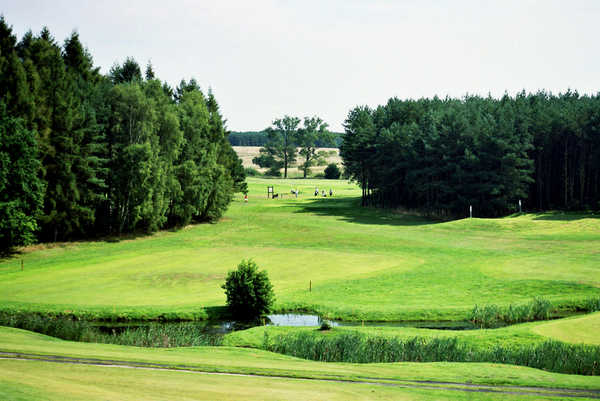