The layout is special, the wiews good. But the course was in a very bad condition. Greens slow and bumpy, gras in the bunkers, no finish. Cold it bee the money. Lorca is my favorit course in this region. Johnny S

This is a gem of a course

I have gone back to this course over and over since it opened. The views of the mountains and the sea, create such a perfect atmosphere for golf. The course itself provides a challenge for golfers of all abilities and you need to steer that little white ball around lots of lakes, ponds, ravines and bunkers before you get a chance to sink it in the hole. JJ and his staff are always friendly and helpful and i for one will always play this course every time i visit the area. I urge you to try this hidden gem of a course, because it just feels right.

The best course played in spain ever.
Although the clubhouse is only provisional, the staff are welcoming, the layout is fair and with views of the mountains and sea it was a fantastic experience, We wil definately go back!

Without doubt the best!!!

I played the course in 2018 and I liked it very much, in 2021 I returned and I feared, due to the real estate crisis and covid19, of being disappointed and finding a large pitch in bad condition, a fact currently common to most of the fields in the area. the field is in excellent condition, and for me it remains one of the most beautiful in andalusia and the region of Murcia.
I state that in some seasons I have really played them all, moreover it has nothing to envy to the fields of Arizona and Nevada, in terms of landscape, with the addition of the sea view. Five stars.

Played on December 16,2019.
Driving range is available.
The layout of the course is sporty and a challenge from the rear tees. The game is fun at all holes and the view of the sea and mountains is spectacular.
The paths between the holes sometimes a bit long, but easy to manage on foot. The staff is very friendly and helpful. Price-performance ratio is more than fair.

On the way (our sat nav would not have found the right driveway) you can see that the whole time was planned as a small resort. Now there are construction ruins and unfortunately not even a driving range. The trolleys are free of charge - in retrospect, we know why, namely out of compassion!
The place is well maintained, sometimes quite difficult greens and the photo opportunities, either with sea or mountain range in the background have something.
The layout of the holes is interesting and quite demanding.
But it looks as if you had "forgotten" a few holes in the course and subsequently reineflickt this somewhere. In other words, it is not clear to me why, especially on the "back nine", such long distances between the holes are often to be bridged - sometimes even past other holes.
Maybe it's just a business model, you almost have to take an e-cart...
An overall judgment is not easy, but since the most important is the place itself and is good except for the walking time, there's 3.5 out of 5, so with stomachache 4.

relatively new golf course, therefore also little tree obstacles. the photos show the layout of the square well. hilly, sometimes tight, sometimes a bit more generous. who is on foot on the road must also do something sporty - it goes quickly up and down.

Do not get me wrong, the place is worth me but at least he leaves perplexed. Lighter than Valle del Este, heavier than Desert Springs. Fantastic location in front of "arizonischen" mountains and a beautiful sterile condominium, with views of the sea.
As before, no driving range, but two networks and two practice Grien. Well meant in routing, but the beginning of serious neglect can be foreseen, even though he is apparently always well attended. At each teabox a big sign "Aguilon Golf, designed by Sterling & Martin" instead of the usually missing useful information. Many irrigation lines are broken, unfortunately they were necessary because the selected planting is not suitable for desert. As a result, many palm trees and lower plants have been received. In return, some of the most wide fairways are mushy leaking pipes. We are committed him early March 2015 (11.5 km loud pedometer) and thereby have noticed that he is probably intended for Carts: The haircuts especially the back nine are often far away from the green of the previous path. The former probably very simple clubhouse has been somewhat sterile pimped in the Harbor-style food, however, was great. As you saw in the selection of drinks (cider!), Comes a lot of the players from the UK. The pull trolleys were thankfully nothing. Employees to see little loose on it. Conclusion: a long detour worth it!

The Hermit is a spectacular mountain course of any journey is worth it!
Have now almost 100Plätze in Spain, Aguilon belongs to the Top 20!
Just Super!

Challenging, not easy to play space, which is a real pleasure. Beautifully nestled in the countryside with great views of the mountains and the sea. Compared to the year before last, the care was very good condition. Clubhouse, restaurant still appear as a provisional and Eigenumswohnungen the resort are mostly uninhabited. Nevertheless, the course is great to play

The site is located in a bankrupt urbanization, which means that almost no edge development exists. A very challenging course, which one has unfortunately indulged in any of the range and has thus only minimal training opportunities in the form of a tiny chipping area and a small putting greens. Very friendly little club house which is suitable for a coffee and cold drinks. Good carts, inexpensive and considering what's best for Mountainous area with distance sea views, a par 4 and par 5 that of yellow require first of all, about 180 meters carry over an impassable canyon, several par 3 as the "Island Green" with a ravine are applied to 3 sides. Each hole is difficult here in his own way Here is a real challenge no tourist has emerged vacation place. Too bad the environment is so bleak broke, the place was in excellent condition care. We came back the next day, despite 35 minutes of arrival and free golf at Valle del Este because this place is so special. At 15 and 16 you can see the top of a mountain railway line: if the railcars passes believed to see the Glacier Express. anyway something like that. After the round, you get a beer mug in the office and may use any application even at the tap at the door. Lots of unique features, this space! 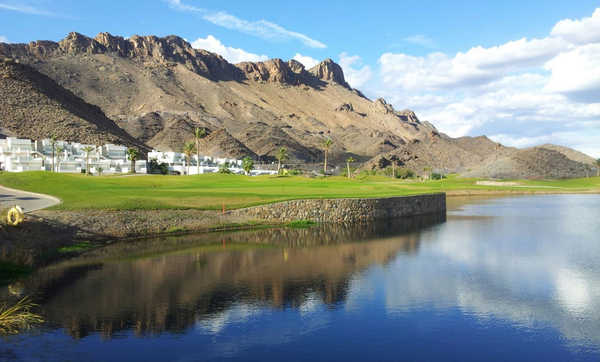