We played the course early March 2020, we are all single handicaps.
The course was in a terrible state, some of the greens had holes from Arefications and the areas around the greens were in a desastrous state. The fairways were also in bad condition.
We could not believe, that the Portugese Open are being played here, there are a number of courses near by, which are much better designed and quality standarts are 2 noches up.
Most upsetting is that the club demands such high green fees and offers such a bad quality.
Save your money and time and play somewhere else.

Great golf course. Over 7300 yards off the whites so it's a different golf course to playing off the Yellows etc Played it mid/late March, greens were large and tricky. Plenty of water with long carries and the wind was blowing. Back nine most holes were into a strong wind which made it really tough, especially 18!

We had the pleasure 4 of us, of playing Victoria twice and and had one of the best golfing experiences ever, A hard but fair challange, great greens, good shots well rewarded. The shot saver we purchased in the pro shop was very accurate and made the game moer enjoyable. Staff in the bar were very friendly and helpful at all times. We will rebook again for next year.

I played here in early March 2020 and am single HC - course is in very bad condition, both the fairways and the greens. Marshall very rude. Space is not worth the high green fee fees.

One of the best places on the Algave

I played the course in March 2019. Very windy day with some rain showers in the morning, thus certainly less game operation than normal. Play time for 18 holes in the cart as a single player 3 hours.

The rough was mowed down to 1st cut height, so that you could find your balls well there & continue playing. Even the one or the other water you could go out of the way. Nevertheless, for me an extremely difficult and challenging course, especially on the Back-9, when on many tracks water comes into play.

For higher handicappers, I can only recommend to go to the front tees, so as not to lose the fun of the game.

From the requirements and design by far the best of the 5 Dom Pedro squares.

Already in April we had played the course 2x. In comparison to other places in Vilamoura we feel the place rather than boring. Condition is still good in December. Greens great. Staff very friendly and accommodating. Annoying were extremely slow-moving 4er but also 2er flights that have let us through at some point. Club restaurant rather average. Green fee we consider overdrawn.

Just before the Open

Shortly before the Portugal Open, the rough was so blatant that we did not find 3 meters next to the fairway 3 balls. Then stay on the fairway, you might think. Nope - I prefer to stay home. I do not enjoy it. Am I too bad with Hcp 13?

We played the course once in September just before the Masters and now in early June. The condition was better in September. The course offers interesting tracks - especially the tracks 11,12,14,17 and 18 are an absolute highlight, as much water comes into play. If you are in the area, you should definitely play the course. We'll be back!

It starts at the reception (extremely attentive and friendly) and stops at the par 4 hole 18, which demands a lot with 415 m (from yellow). Greens and fairways were well maintained, the T-boxes neat.
The front nine invite you to score points. However, a few extra trees would not hurt on the first fairways. On the spectacular back nine it goes pretty well - a lot of water requires tactical game.
We played the course on 10.11.2017. The last two holes clock with the low-lying evening Algarve sun were balm for the soul.
Among the 5 'Dom Pedro Golf Picks' in Vilamoura, Victoria is the best. For golfers with high HCP but rather unsuitable.
Victoria, we'll be back!

Top position, even if the care condition is true

We played the course in mid-March and have a divided opinion.
The service around the application and the clubhouse were great.
Since rain tomorrow was announced, we wanted to shortly bring forward the start time by one day, which was made without any problems.
Up range balls as pyramid and trolleys are inclusive.

The place itself realize significantly to its design as a spectator and Fernsetauglicher ChampionChip Course.
Little trees, so that the cameras have open field and plenty of space for movement of spectators.
Also the entire layout with fairways, bunkers and the design of the greens is noticeable in the audience Tour players.
Positive is certainly that of the place from a minimum skill level many variants can play the holes.
Always according to the motto risk and reward.
Some fairways (Victoria's Corner) run around a lake, which is beautifully integrated.
Other run along a scale with large stones watercourse and a second lake, which is nice to watch, but somewhat artificial acts.

Not so nice was the care status in March, which was certainly far from the state during the Masters in September / October.
The greens were rather slow, the fairways had no First Cut and there were here and there distinct bald spots.

Whether this is the game fun detrimental everyone must ultimately answer for themselves.
But probably it is unlikely to succeed one place 365 days a year to ensure a quality tour level.
In this respect one must probably everywhere here and there a cut in take.

Final Conclusion: Play and watch in the fall, as beat the professionals.

At 12:11:16 so played around 3 weeks after the Masters.
Fairways dreamlike, Rough was back shortened to a normal level, the greens a dream, so one imagines putt.

Cute reception when I after a prolong evening was late me a few days ago and was wrong in court, I was immediately driven to the Millenium.

Ok, layout is fine but the care condition is a top position unworthy! Everywhere cigarette butts and other rubbish... We were, one day after we had played the "Old course", very disappointed with this highly acclaimed course.
Mustapha

Price and performance are not correct

A beautifully landscaped, award-kept slightly hilly course where each hole is interesting.

Have the Victoria Square played for several years on vacation and Pro / Am's and most recently in Oct. 15th I forgive very much 5 star for this plant because here everything is right. Ok the rough is not easy to play but that's one of the challenges of this place.

An extremely well-kept place that is equally challenging. Take with a lot of balls, because with the ubiquitous water hazards you will need. Actually, the most beautiful place among the many courses of Oceanico Group.

A Really nice place where you can let the driver full speed!
A real American ChampionChip Course of Arnie Palmer in the Algarve. Very nice to play, good design, but the surrounding area and the flat area take the Course something the wow effect!

Played in january. Top state care. On the front nine I was not really excited, but the Back 9 then put myself into euphoria. Very fast and tricky greens. A must have.

Certainly a good golf course with a sporting challenge. The greens were pretty tricky. The place was in January in a very good state of maintenance. However, I find it just on the first fairways, not particularly spectacular. He lives lives probably more from the image of the Portugal Masters.

One last tip should speieln this place, because it is something really special. In Summer Special 80 €. Junior was free.

Care condition was not perfect but ok.

However, you should already have it good drives and relatively long fairway shots.
So the old ladies with the 70 m shock should prefer to leave it.

Nevertheless, to all beginners... doing it, just so you learn it!

'm On 15.4. Victoria played, unfortunately the place was poorly maintained: Ok fairways greens were punched and sanded, do not cut the other and very different bumpy and in poor condition-fifth Was not worth the money. With good care, the state is certainly a wonderful golf course, but 140 - € green fee is clearly too much

No place for beginners

A great course for golfers with a stable game and at least average lengths. Despite the high green fees should you treat it yourself. Not recommended for beginners because of the frustration fun distributes the game. 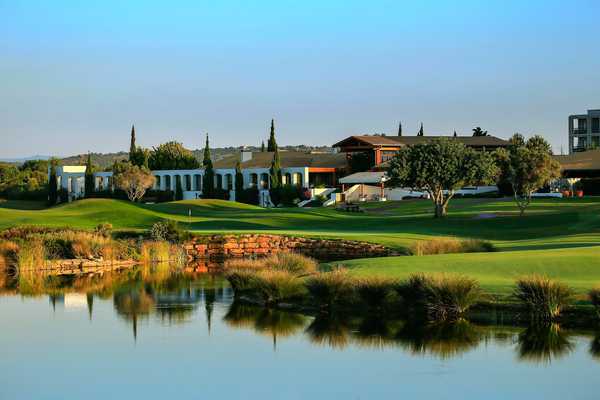