Place 1 - 18 everything relatively tight you can play but is not a must many beginners on the road and also on the WE leads to many waiting times! Place 19 - 36 actually a slightly longer short course, you can let off steam at the Grennfee prices from 60 to 90 € on the weekend in better places! Catering quite o. K only in the drink prices absolutely overpriced. Sign in the clubhouse very friendly and Proshop well run

Ask before the tee in the clubhouse for the right place, because most golf watches the partially converted fairways can not assign. The greens - sorry - are in April 2018 a mean disaster... Maintenance status of the plant is great. Service in the weekends slightly overstrained restaurant also okay. However, it works out with the hosting of larger groups only moderately with a view of the food... rather below average buffet mish-mash... and the previously so praised Spare Ribbs - supposedly the specialty in the clubhouse-goods were also much better...

Yes, the two 18-hole courses are not too long but the difficulty is not to be underestimated - the gameplay makes it!
Why this should be a pensioner's place remains the secret of my previous speaker. Also the gravel roads are now growing and who is traveling with the cart has firm ground under the tires.
It is a great complex with a wonderful wellness hotel, very good restaurant and friendly people in the secretariat.
Flora and Fauna also remarkable, as we were about 50 young people in the area of ​​the area.

Very simple, short golf course without class. At best, mediocre, with the greens catastrophically slow and unfaithful. Can not understand how to give this place four or five stars. What then earned true top spots? Service and facilities very neat, therefore still two stars.

In the past year, golf courses have been created. The trails mostly follow the line of semi-roughs, but also cut fairways. The main problem is the floor covering: it consists of sharp-edged split!
By the distribution of the stones in the neighboring grass (up to 2 racket lengths on both sides) one has the problem of ruining his racquets (especially woods / hybrids) by claiming regular relief.
Too bad that a so far playable place was so loveless "improved" Unfortunately, I could find that other Weiland places (Golf Absolute) this kind of improvement experienced.

There is a lack of sophistication

"Another Weiland Platz "first came to mind. The facility is well laid out, the service is very good, driving range, club house... all there. Also the maintenance condition of the fairways and greens is fine.

The square itself is not the most serious of the course design - which again is the default. Along with wide "Tolleranzzonen" bad shots are rarely punished. This takes the place the real playful pleasure or anderum the challenge.

Conclusion: at 60/80 euro green fee I feel the price / performance ratio rather average

Have all 36 tracks played on several occasions and find the place as some reviewers here boring. Tracks are challenging, varied and far from simple. Place is always in top condition, the clubhouse and the restaurant very nice, all the staff was super friendly. Food is very good, terrace and small lake invite guests to sit. Hotel construction is completed and the driving range is also newly prepared again. Tee mats new. All in all, a very nice facility.

We played the 36 tracks on several occasions now and unfortunately can not understand the negative comments.

In one to two years, when the trees have continued to grow there, it 5 star.

Clubhouse is very nice. Place narrow and rather boring. No Hole description and confusing.

Seldom have so many "Four" call heard... flat and tight.

The driving range attracts mid-March already at a discount from the lawn. Also, the Garmin does not let you down.

Gernsheim was for me to St. Wendel, Biblis, Dackenheim and Bachgrund the fifth Weiland system but it is also clear from the above creatively the weakest. Although everything is for golfers if available, but lacks the pinch of salt, the meanness and oddities that I associate with a Weiland golf course. They are implemented with high probability with the under-construction 9-hole course - this I will no longer look at me but due to the current pricing:

With the goal of the green fee players to banish with Remote Membership on these totally uncrowded places, were on the Weiland systems with the start of the 2012 season, the prices for players who do not have a (common only in Germany) specific feature in the membership card, significantly increased. So that one is consciously or unconsciously far overshot the target. So while walking with friends in their home club in France, Austria and Switzerland at a reduced price with the round, they pay at Weiland golf courses on the weekend 100 € instead of their 70th A pricing, which seems to be apparently escaped even its own members in this interpretation, as I confirmed the flight partner. The sardonic reference to the receptionist, the "Korean friends" would have been so never complained, I have considered open contempt of his paying guests.

After a few years this place played again. Has really developed into a professional system. Here everything.
And the place has a bit of everything. Many bunkers and some water come into play. The greens are interesting.
Beautiful clubhouse. Worth a visit! 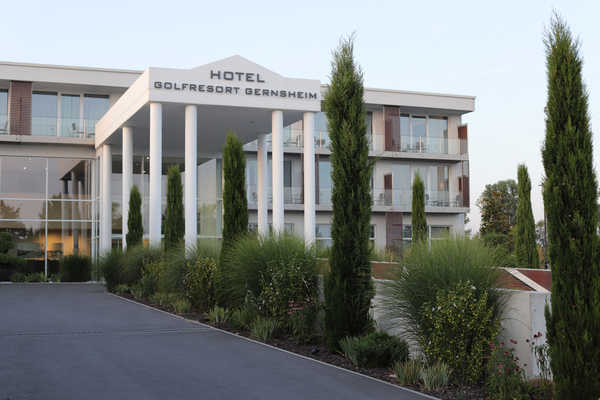