Beautiful golf course with Scottish ambience, especially because of the rather unusual deep pot bunker in Germany.

The course is varied and always fun to play. Recommended.

Full greenfee not worth it

The greens are ok but everything else has nothing to do with a golf course to dun the course is a field and not a golf course. for something 85 € is a joke

Played the course on the 20th and 21.8 and are repeat offenders - we found the Scottish-inspired course with the strategically very well placed, plentiful bunkers already very interesting on our first two visits ... - already have a tournament there in very much nice accompaniment played...

The course was in good condition, given the very hot temperatures of recent times, especially the very good running greens with little pitch marks are positive.

We really enjoyed the round on Monday and were very nicely received in the secretariat - including overnight tips.

Tuesdays we played again early in the morning - are extra driven because of the place on Lake Constance. We had a lot of fun, because there was little going on and the place really good mood, because of the very varied tracks, which also open a couple of times and birdie chances a medium handicap.. yes, even very demanding tracks, but that's what makes the charm out...

Unfortunately, one of the greenkeepers was very annoyed by our golf game, since we are probably not very talented in his view and have disproportionately often hit the fresh bunkers (all our tracks we have redeemed - mind you) -> (The bunkers were on Mondays even not done and Tuesday on the back-Nine either - no problem for us - just wanted to mention it because of the anger's on the first 9 on Tuesday) ... In any case, we found it very irritating that the Lord repeated his Displeasure has made known - From our point of view, we could still bear that he makes fun of it - was possibly not a real achievement - but that he strongly acidified comments and spoiled our mood is unacceptable. In our view, it is like this: "If we could golf without meeting bunkers, we would not play in Steißlingen but on the PGA Tour ...!"

The bottom of the barrel but knocked out, that one of the greenkeepers us around with the cart and has checked behind us, whether our dog has not left anything unlawful (a) we always do everything b) she peed only c) outside the golf course on a green strip between two WAYS !!!).

It hardly seems worth mentioning that there were no towels and the golf course users had to blow dry.

Kitchen remodeling and no food is there to understand the most.

Overall, it is a pity that a holiday weekend that was planned because of the previously optimal golf club around this is now negatively occupied and leaves the feeling that in the future golf vacations should probably take place in other places.

Too bad that the high quality of the past year could not be maintained, as well as the newly created and great-looking terrace does not comfort it.

Full green fee for a freshly sanded place - an absolute impudence.
Actually, I like to play the course because nice - but if I had known the course conditions before (practically unplayable), I would not even have played for half green fee.
I prefer to do my bunker training on the practice grounds rather than on the fairway...

On Monday 02.10. we wanted to (foreign) golf in Steisslingen. The receptionist made such an insurrection, because I had forgotten my golf card. So something of unfriendly is so far never happened in a golf club. I'm on the golf course right after work and have left the card at home. Can happen every time, but no I have clearly felt that it must by no means happen. I think she was just too lazy to enter the data by hand, but the way is simply no go!!!

Very nice, spacious and well maintained golf course (18 holes, driving range and clubhouse / restaurant).
Very well maintained Fairways, Roughs and Greens with well-designed obstacles (water and very good, sometimes quite big sandbunker). Varied holes, which lead through a very beautiful landscape and the play on any of the 18 holes (partly quite long) do not get boring. Also on the edge of the railways great value is placed on details, so there are some discounts and partly along the tracks beautiful sunflower and colorful flower fields. Compliment, very sympathetic and beautiful for the eye.

The reception in the club house (pro shop and payment of the green fee) was very friendly and professional as well as the end in the 19th hole / restaurant was class. Very friendly, fast service and very good food.

Conclusion: We will definitely be back soon!

I played the course on Thursday 15 September 2016th The lady at the pro shop was friendly and courteous. The infrastructure in and next to the clubhouse is good. in my view, is characterized by the good training infrastructure with generous driving range, a large chipping green with bunkers all around and as good a putting green. The place is at the time of my visit of the tee boxes to the greens in good maintenance condition. The greens I judge as very good and relatively quickly. The fairways are varied, relatively long and often defended with strategically placed obstacles, and the greens are mostly undulating and provided with partly strong tendencies - it's fun to play this course! The course is situated in a beautiful and peaceful landscape and is designed generously due to space constraints. I'll gladly come back. The green fee is definitely worth it.

Dear Birdie Hunter, Thank you for the review and we look forward to welcoming you back with us. Best regards Annette Günther conditioning duct More

Thank you for the review and we look forward to welcoming you back with us.

Good place in a beautiful landscape

Medium weight, more open-looking place with stunning views of the West Lake landscape. Railways not so varied, but some interesting 'harassment' and changing degrees of difficulty here. Warm welcome, excellent clubhouse with a very good restaurant. Overall, a trip and a round of golf value.

We have the space at 14.3. played because we jumped as old Scotland fans to advertising and as already could be played on summer greens. Although very interesting layout, some nice bunker there are also, however, Scottish feeling did not arise. What annoyed us that in the lush -and afterwards to high-Wochenendgreefee the white reductions were partially inserted in red. If already full green fee, please also for the whole length. This has very delicious food in the clubhouse and at least getrötestet something.

Been going there for many years, once a year at the Lake Constance. One or two laps around the beautiful grounds are an absolute must!
Beautiful fairways and magnificent bunker offer a varied round at a fair green fee.
Keep it up!

Played on 05.18.2014 Everything is perfect except the price on weekends I find too high!
Best kept place, super nice freundlche reception and very good restaurants. Played for the second time in 5 years and everything is still at the same high standard.

Us... to measure the GC Steisslingen with the demanding tracks. Secretariat very friendly and courteous, no T-Time a boon price / performance including restaurant Top. We (Swiss, Giant Winterthur) play the course several times a year.

So I imagine a place before, great condition, challenging and the staff is friendly to the hair tips.
Value for money I would even give 6 stars.

A great place, great condition, exact match is required. Some bunkers have it in them. Fair price

Been to Golfclub Steisslingen e.V. am Bodensee? Share your experiences! 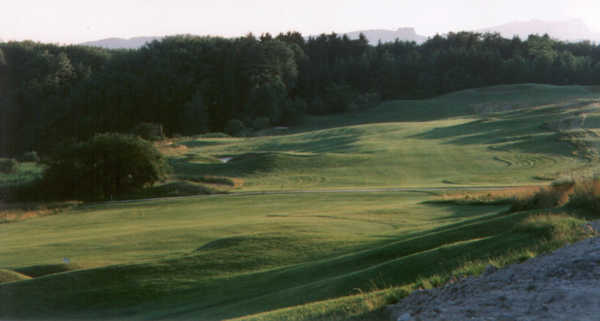