Our group of 12 ladies had a great day on the course, some greens were poor in places but overall a fantastic course. We booked a meal in the restaurant for when we finished our game, Normally the kitchen closes at 4pm but it was kept open for our reservation at 5pm. The chef exceeded all our expectations, he cooked for us and explained every course that he brought to the table. Our produce was locally sourced and I have never met a more passionate chef who explained why he had cooked the dishes and from where it came. Not only was the food delicicious but beautifully presented 10 out if 10. I cannot recommend this place enough. TRY IT. Thank you for a wonderful meal that was excellent and not overpriced.

Fantastic golf experience in general, very nice hospitality and delicious breakfast in the clubhouse. Very nice design (Severiano Ballesteros) and maintenance. It looks like all the buggy's are brand new. Great day.

We were there last week. The golf course is improving day by day. Works in some of the greens but we got advised and informed before going. Great service and very helpful staff. Awesome prictice facilities and driving range. You can tell is a Seve desing. We really enjoyed it. We will surely come back.

We enjoyed a great round of golf in Alicante Golf. Nice Seve design, very challenging and fair. Excellent maintained golf course and we finished the day with a delicious paella and rice dish in the club house.

Always in excellent condition a joy to play. If you stray off the fairway you have a shot but a challenging one. The greens look like they have been hand cut with scissors. Watch out for the lake at the 18th when lining up your putt, go to far back and your in the lake (happened to one of us).
You leave the course with a Seve smile.

Was on the course April 2010, fantastic condition, not too long for our handicap golfers and a pleasure to play... greens in great condition and the Roman ruins a nice novelty to play through. a lovely course in a pleasant site... will be back again next year

Always look forward to playing this course any time. The most "Fun" course I've ever played it's got Seve's personality written all over it. I have recomended it to all my friends going to Spain and have not got back one bad word about it. It is a challenge but a fair one. It gives you plenty of birdie chances but make a mistake and it can punish you severely. Visually you have some tough tee shots, but only visually! A buggy is a must because of walks between greens and tees. I look forward to my next visit. This course is in my top ten.

City golf of a special kind

Played on 6.10.2019. The only city golf course of Alicante is unique and should be played once. Did you find the driveway on a busy street (no signposting) and on the small parking lot also get a parking (incidentally, you can also arrive with the TRAM and get off at the stop "Campo de Golf"), you get in touch with the nice Lady in the ProShop. Buggies and electric trollies are available for hire. For the place itself, since everything is flat, you certainly do not need a buggy, but for the paths between the tees, which are sometimes a bit longer and run through various tunnels under the streets but it is not a mistake to rent one. For example, the path between lanes 6 and 7 is determined 800m and performs under two tunnels. The place itself is complacent therefore, usually sufficiently wide fairways suitable for high HC. However, water often comes into play, so there should be enough balls in the bag. Rather strategically submit! The condition was generally okay. In our round, some men's haircuts were spared and placed very forward. The greens were not the best but okay. The special feature of the system is quite safe, especially on the backnine the game through the street canyons. Are it often single-family houses or villas, surrounded with many ball-catching nets, one has the impression of stadium atmosphere and felt hundreds of observers, if they were all on your balcony. A highlight of course 16 is the game about a kind of excavation site, which is characterized as a ground in repair. Even on the second train you can see historic archways. The game operation on a Sunday afternoon was busy, there were waiting times, but we were through after 4 hours. There is a driving range, whose balls also like to get lost on track 1! Start times can be booked online via the homepage and in the afternoon there is a 50% discount as a sundowner. We paid a reasonable 40 € and 12 € for the E-Trolly. The restaurant was well visited but as there was a big party we did not test it. 4 stars because of the special atmosphere and the design of Seve!

We were here in July 2019 (Hcp 10 and 16). The place was in excellent condition. Great greens and fairways. Due to the temperatures we took a buggy, but also goes with trolley. Buggies already a bit old. The place has a few interesting tracks, relatively much water left or right. Since the square is located in the middle of Alicante, right or left are also constantly houses, sometimes the tee is right next to the terrace.
Nice to play, not particularly difficult or exciting. Unfortunately the halfway bar was closed (~ 14.00 o'clock) and in the restaurant we did not get food at 16.30 o'clock!?!

On 10.10.2018 we played on this place for the first time. We also know many other places in the area. This place is fantastic, the fairways and greens, bunkers absolutely maintained. It's fun to play in this varied place. The secretion is very cool reserved.

Unfortunately at the wrong time

We played an 18 hole round in July 2018. Compared to our Vorschreiber the greens were broken by aerating and many places on the green already desolate. Although no lack of water prevails at the place (fairways extremely juicy and humid) The place is very varied.
Quality (1 Excellent, 2 Good, 3 Satisfying, 4 Well, 5 Too bad about time and money):
Tees 4 (partly 10 cm high grass) fairways 2
Greens 4
Conclusion: Nice place, score hunting is thwarted by the greens.

We play in the hot time cheaper incl. Buggy. The secretary is elegantly reserved.
We are very lonely on a Friday. But many gardeners accompany us. The place is in an absolutely great care condition, unlike the older reviews here! It is partly slightly damp on the Faiways, but completely in beautiful lush green. The greens are lightly sanded, but ok. I like the design of Seve Ballesteros. Big bunkers, but also quite a lot of water, but you can always dub (sometimes 130m carry required). The Faiways are very well maintained, everywhere is very thick grass.
After the round we go showering, there is an extra member locker room. The showers are on but again together, also for external.
The restaurant is modern sophisticated, here are the service forces again reserved reserved.
The parking is here: https: // goo. gl / maps / e8PmBEqYH5x

Worst year after year getting worse

Have played the course in the last 4 years, but now for the last time. The hope that the place will be better cared for were in vain, very poorly maintained and dirty buggies and state in very bad. The place does not play it, because it is still overpriced, not worth it.
Management leaves something to be desired, very unfortunate.

Too bad for this place.
Have the place played in the last 4 years several times, unfortunately, every year he was more and more into disrepair. The space is surrounded in the middle of the city and houses, this can not change it, but the care. The bunker catastrophic that and many who live greens very well maintained with fully droppings from the many ducks in the many ponds. The fairways have also become worse and worse, one sees almost no Greenkeeper.
This place does not have to play it, though many places are suffering in the area under the care, yet there is a lot of which are much better.

Where is the beach?

When I read the description, I had to ask myself whether I played the same place: "The location right on the beach can lead to one or other unsightly gust of wind".

No trace of the sea and beach. The site is located in the middle of the city! Although has many ponds (sometimes unfortunately already moldy smelly water) and the Roman ruins, you must transfer to a challenge. But otherwise? In addition to that we ourselves had some trouble with GPS to find the entrance to the facility where the parking space is not exactly lush.

The journey of over 100km has in my opinion not worth it.

We were the last 3 Winter always in the region of Alicante and have played several times this place. Here it can be watched as the place from year to year is maintained worse. UNFORTUNATELY is very unfortunate, but probably haklt the crisis, the same is true for the Husa

Close to the houses

A beautiful place it has water everywhere and you never play on the same path back and forth-the whole golf course is surrounded by homes (left and right :-)), this may become afraid to make the tee :-)
The price was fair, they have edited the greens this week and have played at a special price. You never see the sea but - this is the only thing that is a shame.

Been to Club de Golf Alicante Golf? Share your experiences! 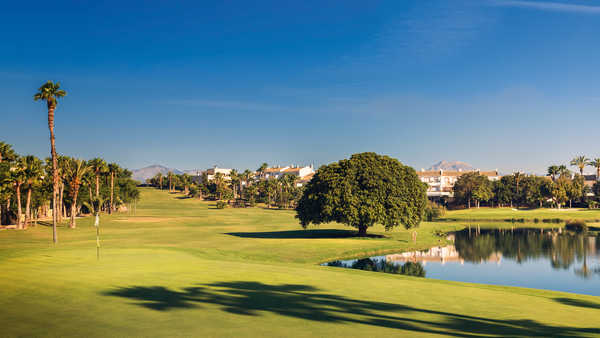