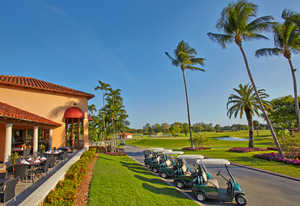 We have often looked at this place from the landing airliner. In the short final on the RWY26 R & L - south of the approach - good to see. For more than 25 years we have seen this sight and never before have we had a tea. It just did not fit.

Now we played here on this kerosene pregnant and loud place. You play on the south side of the course right in the slope axis of the RWY27 only 500 meters before the start of the run. Depending on the wind conditions, the scent can be very intense.

There is a lot going on in the field and in the air. The heavy and super tarpaulins float in dozens of ways here.

From the air, the place looks young, it was opened at the beginning of the 60s.
Several designers could work here, it was rebuilt twice. Charles Mahanah was the builder, Dick Wilson the second - the blue monster in Doral is from his pen - Robert Trent Jones Sr. has realized today's look.

The beauty here, there are no houses within the square, if you feel like it is on foot also very good.

It's a modern, very good place with many challenges, though there are only two real doglegs. With the exception of two, all par 4s are over 400 yards long - back tees. Also two par 3 measure over 200 yards. One always plays with - the wind - no wonder in this open terrain.

Basically, the course is flat, the fairways have only weak modeling. Likewise the Green - are almost tame for Trent Jones - but are very good. Strategic game is required. Some bunkers are perfectly placed - in the landing zone - stay shorter or above. If you want to play your score a few brave blows are needed.

The name - left - is not program, the place does not have much in common with it.